It's been more of a pottering week in the garden rather than a working one. There's still plenty to do, of course, but there's no planting or harvesting deadlines.

Monday - chilly and windy today. The little gem lettuce has had a revival so I picked a few leaves  for my salad at lunchtime. I fed the fish. The netting is covered in leaves again and more have fallen through into the pond 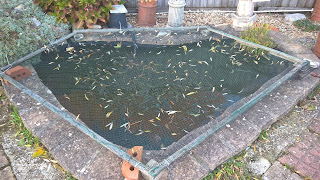 so that took me over half an hour to clear them. No doubt it will be the same again tomorrow morning unless the wind dies down. The forecast was to go below freezing overnight so I put the olive tree, blackcurrant sage and the viburnum Kilimanjaro in the greenhouse, just in case. Amazingly stunning sunset.

Tuesday - no frost overnight after all but a bitterly cold day. I moved the viburnum and the sage back outside as rain coming in later and will save me watering them. The calendula I sowed last week are already emerging 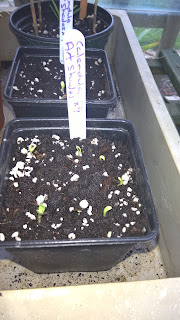 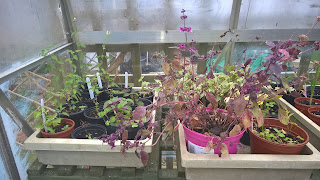 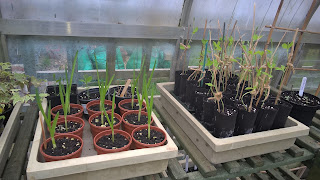 I was working most of the day. When I got home it was raining heavily, so no gardening today. Thankfully, no fallen leaves to rake up.

Wednesday - it rained through the night accompanied by a strong north-westerly wind which meant the leaf collecting made up for yesterday. 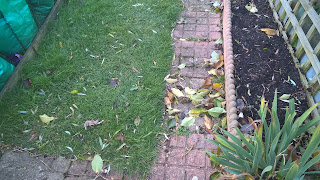 Strangely enough, there weren't that many over the pond. I must have made a sight raking up the leaves in a gale. The leaves on the lawn were easy because they were wet and stuck to the grass but it was impossible to sweep the leaves on the paths (yes I did try...I just hope the neighbours weren't watching the mad woman next door!). Another bitterly cold day but at least the sun shone. The fish had two breakfasts and elevenses, all gone in seconds. Did I say at least it's sunny? Early afternoon the heavens opened, our first sleet of the year.

Thursday - still cold but dry. Off to London for a couple of days. Before I left I watered the greenhouse plants and gave the fish a mammoth breakfast.

Sunday - this weather is weird, today's it's warm and sunny. Back home lunchtime and the first job was feed the hungry fish. The netting was dipped in the middle of the pond again. It has to be a frog (I can't think of anything else that could get on there) and, if it is a frog, it obviously hasn't realised we've left a gap under the netting for it to get in and out of the pond.

The outside garlic has grown 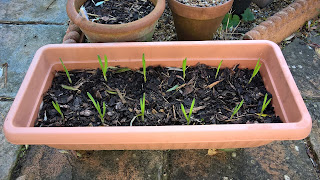 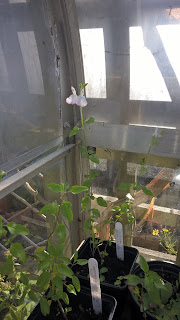 the calendula seedlings have grown since Tuesday 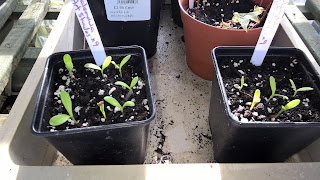 and more chillies have appeared 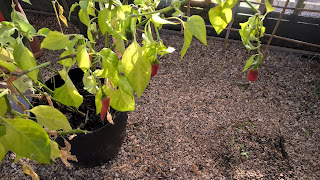 Whilst I was away I saw this lovely vibrant fruit and veg stall and thought, hmmm, my harvest doesn't look like that! 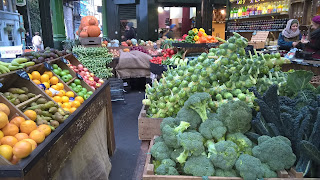 But then I thought actually, I like my misshapen rustic look.

Well that's it for this week. According to my weather app the forecast for the week ahead is mild and dry until Wednesday then rain until forever. Ah well, it's good for the garden. Catch up next week,