Dorset Garden Diary - All The Jobs On The List Completed

Happy Easter...don't know about you but I started on the chocolate early this morning!

It's not been as warm as last week but we've had some nice days, still chilly at night though. As usual it's been a busy week - there's always something that needs doing!

Monday - all of the Duke of York potato plants are now showing. I don't need to start earthing them up until they are about  8" high. I sowed more spring onions and radishes and had intended to start hardening off the peas and courgettes but there was a cold wind and didn't want to risk it. I watered the greenhouse then emptied one side of the compost tumbler. I think I may have seen the culprit that has been flattening the Spanish bluebell leaves - a big ginger cat has been wandering between the gardens. And talking of the Spanish bluebells, they are becoming too invasive. I've tried digging them out but more just keep appearing so I'm going to have to try weed killer as they are smothering other plants. Oh, nearly forgot, the birds I saw the other week were goldfinches, the book describes their flight as fluttery (like a butterfly) and that's what drew my attention to them.

Tuesday - no gardening today as I was working but I did spend some time in the conservatory this evening watching the blue tits in and out of the nesting box.

Wednesday - a spectacular sunrise contrasted with a dark sky in the west. Much chillier. I removed a few bits of duckweed from the pond (it looks like lime-green cress) then watered the carrots and potatoes. Again it was too cold to harden off the peas and courgettes. The cress is growing well 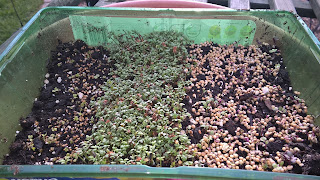 and the beetroot seedlings are starting to appear 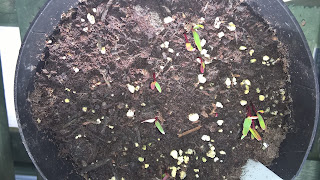 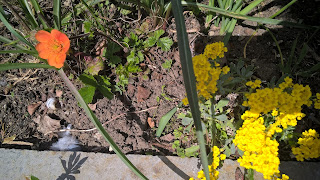 and the rockery is starting to fill out 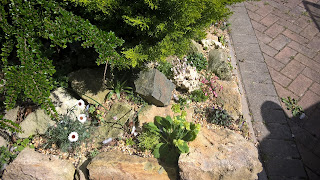 Thursday - the sun appeared at times today and it was warmer. I finally started to harden off the peas and courgettes in the portable greenhouse that him indoors erected 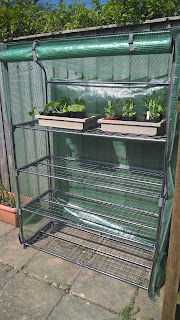 I'm very impressed with it, we'll have to get another one. I'm going to use it for the overspill of tomatoes and peppers in the summer. Re-potted the winter jasmine cuttings I've taken, they will be going along the back fence and moved the Charlotte potatoes and garlic troughs to the side of the house which gets the sun for most of the day as I'm running out of space around the greenhouse and patio area. Him indoors started on another plan for magpie-proofing the bird table 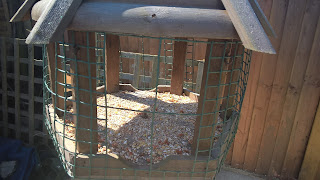 The bees were busy gathering pollen 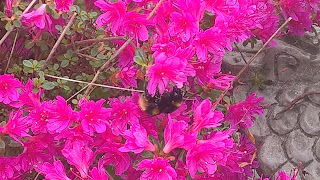 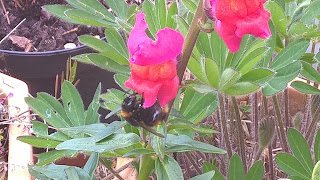 and a lone tulip was enjoying the sun 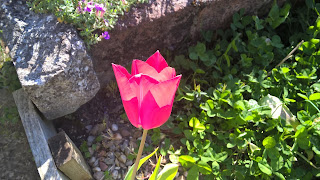 ﻿
In the evening we had a BBQ which him indoors was in charge of. We had our first radishes, lettuce and baby spinach from the garden plus parsley and chives.
Friday - sunny and warm and perfect for gardening. Him indoors' first job was to clear out the cauldron pond. Unfortunately, the frog spawn was decomposing and no tadpoles. If we get frog spawn in there next year I'll move it into the big pond. Such a shame. He then tidied up the brick edging around the flower bed and dug out some of the compost from the back bin - it looks lovely and rich. I started on weeding the top beds as all of a sudden they've become overgrown 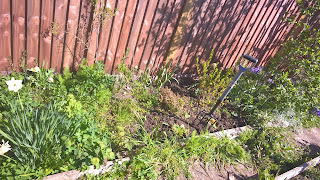 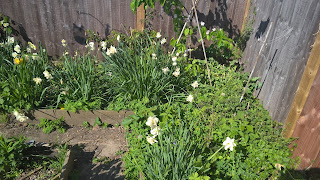 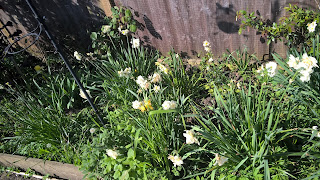 I managed to clear most of it but there are some thorns that will need weed killer. It's looking much better now 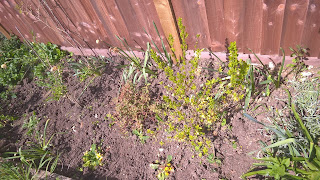 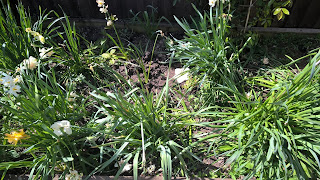 The quince tree is in flower, looking good for it's second year (check out that blue sky!) 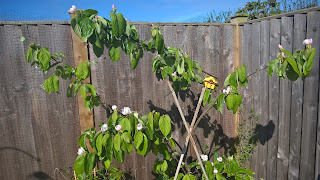 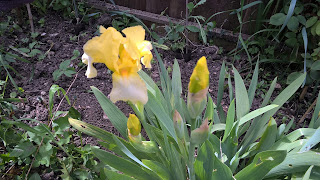 We then spent the rest of the day pottering and tidying.
Saturday - not as warm today and there were a few spits of rain. It was supposed to rain overnight but it never happened so I gave the back garden a good soaking. I meant to do the front as well but we went out and I forgot! Him indoors started on the new frame for the pond netting and I dug over another part of the vegetable garden ready to put in the pentland javelin potatoes and the peas. I dug up two large spring onions and a radish left over from last year's crop! The soil is looking good from the compost dug into it in last autumn. I planted one row of potatoes and put the others in a potato bag so I can compare which grows best. I have a high-tec plan of what's planted where and when, and when to feed! 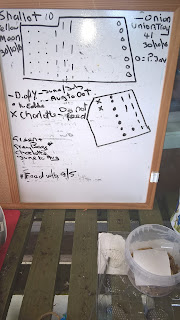 The cherry blossom is brightening up the garden - Morello cherry 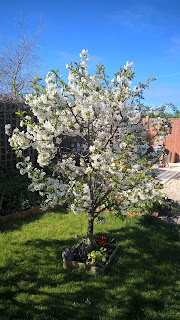 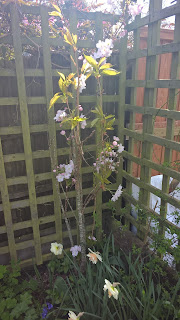 the clematis never fails to delight 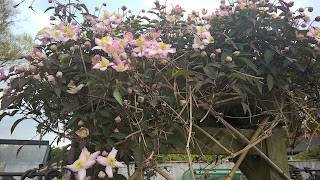 I put weed killer on about three-quarters of the Spanish bluebells, let's hope it works.
Sunday - it looks nice out but it's cold in the wind. Him indoors finished the pond frame and it's in situ 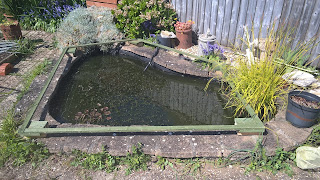 I erected the pea frame. I think the chocolate must have affected my brain because I spent ages faffing over putting the netting around it 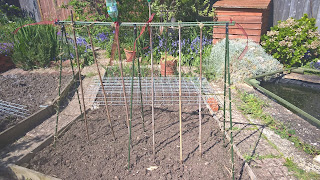 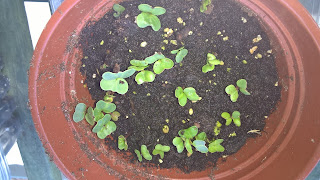 plus one of the Hestia dwarf runner beans 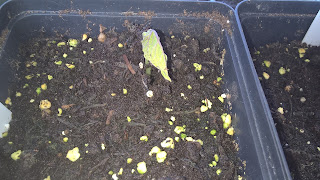 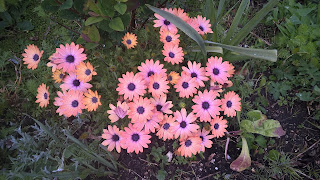 The Spanish bluebells are showing no adverse effects to the weed killer so I may need something stronger. The weather for the coming week is warmer during the day but going down to freezing at night so I won't be able to plant out the peas that are raring to go and we'll have to cover up the newly sprouted potatoes. Still no decent rain forecast.
Well that's it for this week. We are absolutely shattered but in a nice way... time for a drink or two! Have a good gardening week and catch up next Sunday.
Regards,
DD
Follow me on Twitter @DaisyDigga
﻿
Posted by Daisy Digga at 20:20