Well I couldn't let this week pass without a mention. The freeze started on Monday with segments of the pond frozen over so I gently poured boiling water on to clear it. I hadn't realised it was that cold as there was no frost like there normally is...this was ice. I also moved the bee house to a sheltered spot. Tomato seedlings in the propagator had surfaced so I potted them on (cherry and gardener's delight) and also sweet peas but left them in the conservatory as it's too cold for the greenhouse. 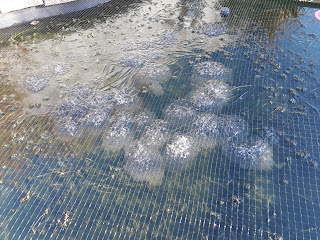 -3C 26F overnight and Tuesday morning the ice was thicker and it took a whole kettle of boiling water just to make a small hole in the ice on the pond and two kettles to melt the ice in the birdbath. I topped up the bird feeders but, because it was so windy I couldn't put seeds etc on the bird table because they would have blown away so I cut off a large chunk of bread and spread it with lard and also cut a chunk of lard and covered it in seeds and put those on the bird table. Bitterly cold. We had a few snow flurries today and then this evening, just as I was getting ready to go out, a blizzard that blanketed everything in minutes.

Wednesday - the ice on the pond had to be at least an inch thick and there was no way hot water was going to penetrate that. I hope the spawn can survive this. 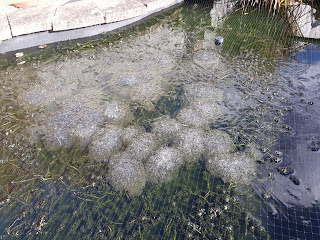 It was a nice sunny day apart from it not getting above -2C 28F all day and a wind chill factor of -6C 21F. It was lovely in the greenhouse though - 13C 62F. Bad weather forecast for tomorrow and Friday so I topped up the bird seed again.

Thursday- well we waited in expectation of Storm Emma and she duly arrived mid afternoon. It wasn't as heavy as we were expecting but it snowed steadily for four hours or so and it was bitterly, bitterly cold in the gale force winds. 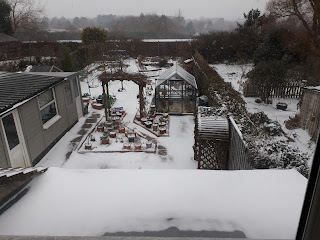 Friday - overnight the snow turned to rain which turned to freezing rain. It froze to our windows, 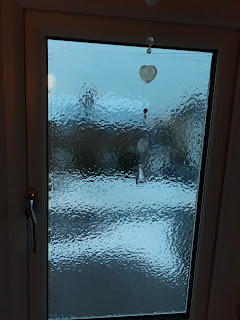 the car resembled a block of ice and the front driveway, pavements and road were like a skating rink. 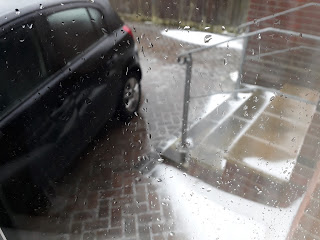 This is the patio in the back garden, as you can see the snow has a film of ice over it. There was even sheet ice covering the lawn. I wanted to get outside to top up the feeders but it was impossible until late afternoon when the temperature lifted slightly. I made it to the pond but I couldn't get to the bird feeders. 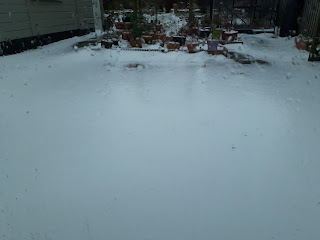 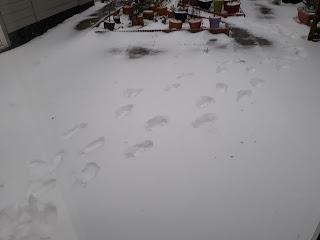 You can see the ice cracking underfoot and it was devilishly slippery.﻿ 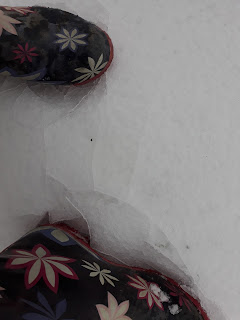 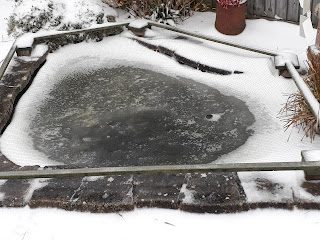 On Saturday the temperature rose to 4C 39F and although the last of the snow and ice hung about for a bit it's all gone now. The weekend was still cold but it's getting milder this week. Well, comparatively milder, it's still cold outside and now we have rain on and off all week.
I hope you managed to keep warm and safe. It was pretty at the time but glad it's back to normal as I need to start sowing seeds.
Regards,
DD
Follow me on Twitter @daisydigga
Posted by Daisy Digga at 20:24