A Cornish Delight - The Eden Project and RHS Rosemoor

Good evening from a damp and windy Dorset...and quite chilly for summer. I'll just bring you up to speed on the garden:-

Monday, to be honest, was a bit of a lazy day. I had a quick root around in the potato bags and was pleased to feel potatoes in all four bags.  The leaves have been dying off as I mentioned previously (I thought it was because I hadn't watered them enough) but all is ok. Apparently when this happens stop watering them so that the skins can harden, wait 10 days then dig them up. Monty Don says he traditionally digs up his first early potatoes on his birthday so...

Tuesday - what's good enough for Monty is good enough for me so as I was going to be away on my birthday I decided to dig the first batch up today or, to be more precise, empty the bag. There were quite a few (around 40/50) but not as many as I'd hoped but then this is my first year of growing them. I cleaned them off and put them in a hessian bag to store, sieved the soil, put the roots in the compost bin and saved the remaining soil. Patting myself on the back for a job well done and folding up the now empty bag (I can multi-task!) I realised that I'd harvested the wrong potatoes, early Peer instead of Bard - what a dipstick!  The runner beans are coming on well, the ones grown from seed from last year's crop have bright orange flowers and the ones bought in have orange and white flowers. The gherkins are marching on and the cucumbers are like triffids, they've nearly reached the top of the greenhouse. Raspberries are coming along, although for some reason the autumn ones are further ahead than the summer crop. Planted out the remainder of the yellow alyssum plants in the front garden, pulled the rest of the onions and hung to dry - the early pulled onions and shallots are nearly ready for storing and pickling.

Wednesday - went out the back of the garden to check on the blackberries (nearly there but not quite, a bumper crop though) and to check on the large compost bin that doesn't seem to be composting and put some more water in to help it on it's way. As I was locking the back gate something caught my eye and it was one of the baby frogs leaping along the path before disappearing under the shed. The early peas have finished and the second phase is up and running. I planted young kale plants and lettuce seeds where the onions had been. The gypsophilia is battling valiantly and..at last...the ginger has just started the peek out of the soil (my second attempt). I gave the garden a good soaking this evening as it appears that my Dorset garden is exempt from rain...I'm sure I've paid my water bill!

Thursday - off to Cornwall for a few days. I soaked sponge disks in water for three hours, put them in the cucumber, gherkin, pepper and tomato containers and covered them with soil and tree bark to try and keep the plants watered. I moved the peppers and gherkins into one of the sheds out of the sun.

Friday and my first trip to the Eden Project. We arrived early after a couple of mishaps with a suitcase and the car keys and strolled down the winding path to the domes - it does look impressive as you can see. 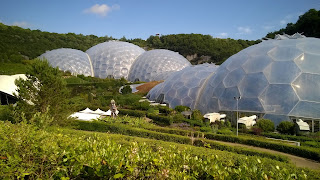 We decided to go round the rainforest biome first before the day heated up, we had plenty of water with us. Halfway round there is a 'cool room' for anyone struggling with the heat and humidity and a chance to leave the dome rather than continuing. We chose to carry on and covered it all except for the viewing platform high up in the middle of the dome - my vertigo wouldn't let me! We saw these delightful roul roul partridge chicks that live in the dome, they are friendly but not to be touched or fed. 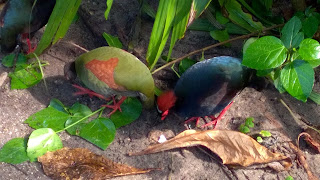 The Mediterranean biome was much cooler and a lot of the plants in there I have in my garden but my favourite was Throatwort Trachelium 'Pandora', they look like they've been sprinkled with glitter. 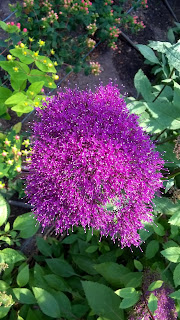 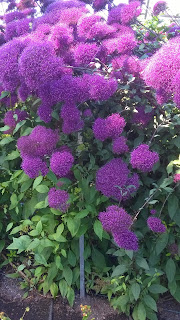 Outside we walked through the scented gardens and vegetable garden which I have to admit I was quite jealous of. There is a land train to take you round the site if walking isn't your thing.
Saturday and another full day of walking, this time visiting RHS Rosemoor. Now this blew me away, it is incredible. There are walled gardens, a lake garden, woodland walks, vegetable and fruit gardens, an arboretum and Lady Anne's historic garden. In fact, we enjoyed it so much we went back on Sunday morning - and to buy some plants, of course. Here are some pics:- 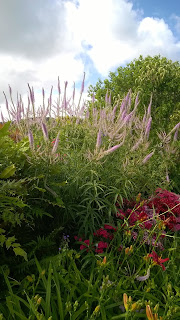 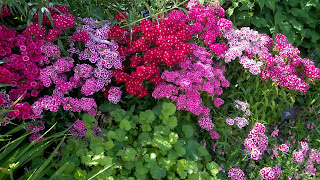 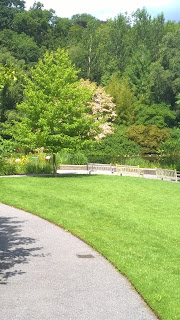 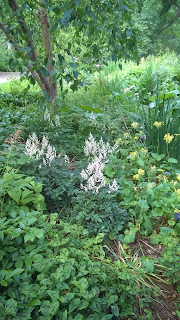 It is definitely worth a visit! We bought the 2015 rose of the year 'For Your Eyes Only', blackcurrant sage, salvia hot lips, lemon verbena and a curry plant. Him indoors is not impressed with the latter as the interior of his new car still carries a hint of takeaway!!
Back home Sunday afternoon and was pleased to see the sponge disks have done their job, in fact none of the plants were wilting so I definitely recommend them.
Well, have a good week everyone and catch up next Sunday.
Regards,
DD
﻿