﻿
Firstly I have to say that I recorded Gardener's World on Friday and watched it last night. How amazing Elizabeth is, how she creates and manages the flowers and vegetables in her garden. The programme also offered advice on growing acers which was enlightening as, apparently, they do not need ericaceous soil and do not need to be kept out of the wind  and, as with the purple leaved acer I have, they are best suited to full sun so I have moved the pot and watch this space.

Monday, and the week kicked off with a blocked drain and professional assistance was required. All sorted and cleared and for once I was grateful for the long, dry spell we've had otherwise...yuk...shudder!!

Him indoors has finished the cottage garden and I must say he's done a marvellous job (and it hasn't cost us too much in bad back and strained muscle lotions and potions!). I do have pictures but I can't find them at the moment, bear with me and I'll have another look.

In the meantime - on Wednesday the pond looked like it was radioactive, having turned a fluorescent lime green. I know it's healthy because the frogs are still practising breaststroke across it but it looks the colour of a weird cocktail you get in a nightclub (not that I've been to a nightclub for a while, in fact a long, long while). I topped it up which diluted the colour a little...we need rain. I trimmed back the tomatoes which are doing marvellously. Unfortunately, the same can't be said for the Japanese squash. The fruit starts to grow then just shrivels away to nothing and the one cucumber that was growing last week has done the same - not good. I planted more kale seedlings in the garden and the little gem lettuce seedlings are doing magnificently.

Thursday I popped down to the local pond shop to enquire about more fish. The pond isn't the same without fish and the orphan fishlings aren't surfacing. We were wondering whether it would be a good time to drain it, clean it and refill but then realised this isn't a good idea because of a) the orphans, b) the frogs and c) the pond seems to have found it's natural balance. The helpful assistant said they will be happy to test the water for me so next week I will be heading that way with a sample.

The rose of the year now has four flowers in bloom. 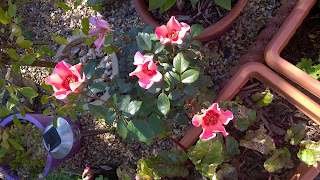 The bee house is still empty so once the back fence has been repaired we will move it. Picked some blackberries today which looked delicious but were actually quite bitter so will leave them for another week.
Saturday, came home from a couple of days away and the garden was totally refreshed from Friday's torrential downpour. The rain was so heavy a couple of the courgette flowers broke off and a pot containing more overflow beetroot was totally waterlogged.﻿ The pond is now topped up, the cauldron pond is just short of overflowing and the water butts are replenished...all is well with the world. In the greenhouse the peppers and chillies have started flowering, the cucumber has gone totally mad and out of control so a bit of pruning was needed. Also, in the seed trays containing the little gem lettuce and the cottage garden flowers, mushrooms or toadstools have also started to grow - I don't remember planting them! 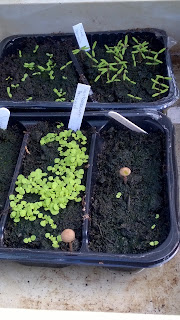 Excuse me a minute, just need to switch go and turn the oven on - pie with potatoes, green beans and peas from the garden on the menu.
In the garden the geums and coreopsis are in full flower and looking very pretty. Forgot to mention earlier, a few days ago I was visiting a friend and we were watching a female blackbird on the lawn. There was an ants nest and the blackbird was trying to eat the ants but they were obviously biting the blackbird's legs as it kept jumping and hopping around. In the end the blackbird flew off - the ants won.
Today it has been pouring down until mid afternoon, so I started on the planting plan for the cottage garden; this consisted mainly of browsing through a sale catalogue from a plant supplier, but it was all educational. Surprise, surprise, three Canada Geese flew over in formation at 15.15 hours, the first one's I've seen this year. I was only thinking the other day I ought to email the RSPB as none have been seen. I've weighed out a kilo of shallots for pickling which I will do tomorrow and I've strung up the rest for storing.﻿ 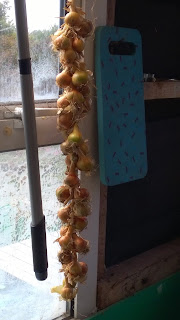 Not as aesthetically pleasing as I hoped but I did get better as I progressed. Next week I have to do the same with the red onions.
I've found the cottage garden pics: 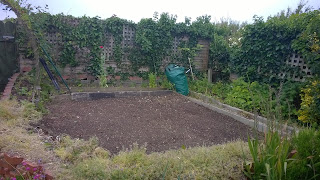 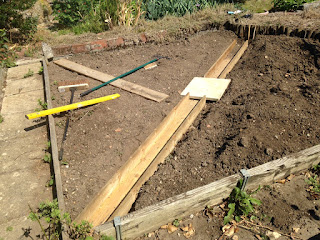 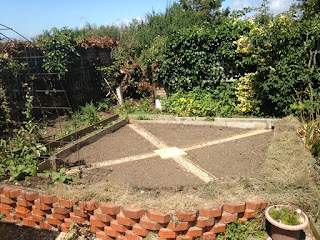 Not bad eh?
Well that's it for this week - at least I don't have to water the garden this evening!
Have a good week and catch up next Sunday.
Regards,
DD﻿
﻿
﻿
﻿
Posted by Daisy Digga at 20:18