Firstly, my apologies for the delay in posting this week's blog, I had a broadband failure which resulted in a sense of humour failure but here I am now, back on track.

Monday - and I have to say that I was still on a high from discovering the fish are still in the pond. Every morning I feed them and within seconds the fishlings (there has to be at least 10) are on the surface head butting the food sticks and nibbling at them whilst the older, wiser goldfish hover a few inches below keeping a watchful eye.  This is a good sign as the fishlings are already expecting food so hopefully they will soon get used to us and not dive for cover when they see us (which is more than can be said about us in other situations hehe). There were a few comments that myself and him indoors should've gone to Specsavers regarding the non-sighting of the fish all these weeks! But in our defence, as previously stated, the man in the pond shop said it was unlikely they were there if we hadn't seen them for a few days and we hadn't seen them for a few weeks!

Tuesday - and a friend over for lunch. We had a pork pie and cheese ploughmans with home grown new potatoes, beetroot and salad followed by a blackberry mascarpone fool - delicious! I conducted a tour of the 'estate' then we sat in the conservatory chatting and staring out into the garden. I was hoping it would be nice enough to sit out; the sun was shining but the wind was strong and quite chilly. Later in the day I picked, cooked and pickled some baby beetroot. The garden is full of them, as is my habit of over sowing everything. I also took these pics of first buds flowering: 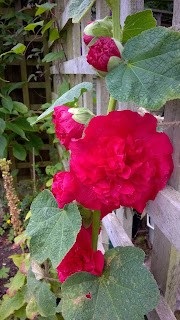 Hollyhock - apologies but can't remember which one as the name tag has faded. 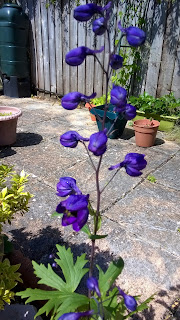 But this one is Delphinium Black Night and I have to say, the pic doesn't do it justice, it's stunning.
Wednesday - spent a few hours tidying up although it doesn't look like it and took another couple of pics:

A vibrant clematis that I think has emigrated from next door, it certainly brightened up the dull August afternoon. 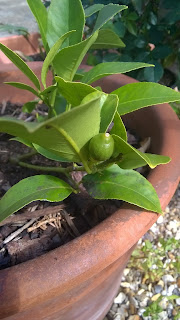 The first lemon
Thursday - and I visited Abbotsbury Subtropical Gardens which, I have to say, is a must. (I will write a separate blog as there was so much to see and photograph). Back home I watered the greenhouse (still concerned about the cucumbers) then I pruned a bit more off the pear tree as some of the leaves looked withered then I started on the apple tree. Not sure when I should be pruning it as some books say summer and some winter, but as it hasn't fruited for the last two years and only a couple of flowers this year I decided to go for it. Him indoors will have to cut some of the thicker branches but it's looking good with it's number three cut. I pulled out some of the deep blanket weed and left it on the side of the pond for any creatures caught in it to get back into the pond. There was one strange amphibious creature - long, thin, bright green newt shaped, that slithered straight back in. And then, as if that wasn't enough, I donned blackberry-picking garb (wellies and thorn-proof coat) and picked over 3lb of blackberries. I'm thinking by the end of the season there will be far too many for crumbles and jam so...how does blackberry wine sound?
Friday - and I'd like to make a correction to my previous tally of fishlings - it's more like a couple of dozen. Within seconds of the food hitting the water they are up to the surface. And...looked like we had an alien in the pond this morning... 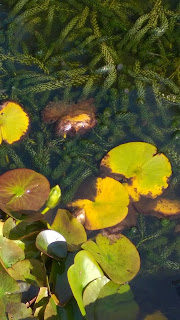 When I first saw this I thought it was some sort of frog then when I looked closer it was two pond creatures on a decaying lily pad!
Today is flying ant day. There were literally thousands of them gathering throughout the day then, just as we sat down in the early evening sunshine for some nibbles and a beverage, they rose from the ground like a mist and swarmed everywhere...nice!
The second sowing of peas isn't doing too well and the cucumbers are still a concern and I probably haven't helped matters by pruning the wrong stalk (it was the equivalent of a structural load bearing wall - oops) but hopefully, now there are less flowers to nurture the plant may just concentrate on the other stem and produce some amazing cucumbers. I have been marvelling all week that the garden has been full of bees and butterflies and then today discovered that the pesky caterpillars have eaten all the kale leaves so I have dug them up and they are now fodder for the composter (which by the way is absolutely brilliant and one of my best buys). I also discovered that the pear tree is bearing more fruit than I realised which is great news.
I dug up/emptied the Maris Piper bag today. Not as many as I would have hoped but between the four bags I have grown this year there are enough spuds to last for a few months and I am well pleased for a first try.
Saturday - gorgeous day looming and turned into a hottie. I dug over the cottage garden in preparation for the plants going in next week and also dug over the top garden by the fence that is being replaced on Monday, so now it is obvious which herbs and fruit trees must not be trodden on!!! I thought I would sow some of the laburnum seeds I gathered. A bit of a trial and error as I don't know when to sow them. As I rummaged through the seed box I noticed that some of the envelopes containing the seeds were damp so I had to go through everything and throw away seeds that had rotted. Lesson learnt - don't store until the seeds are totally dry! The seeds that need drying are now in empty yogurt pots and the yogurt pots are now stood in the plastic yogurt pot trays I purloined (legally) from various supermarkers in the area..good forward thinking eh??
The delphinium buds opened today: 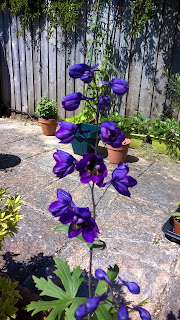 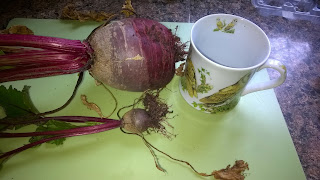 Right, well that's about it for this week. Although technically today's activities should be in next week's blog but will mention that we have had some substantial rain today so no watering the garden for a while.
Enjoy your week and catch up next Sunday,
Regards,
DD﻿