Monday - came home from work and the new back fence had been erected. Apparently the men worked through one of the wettest days we've had for a while so thank you guys at John Bright Fencing, it looks great. From the garden perspective it certainly makes the quince tree stand out (although you can't really tell in the pic, top right hand corner). Now I can concentrate on filling the cottage garden - I'm thinking reds, yellows and orange with a hint of purple verbena dotted around.

How spooky is this, as I was typing the above paragraph someone from John Bright Fencing rang to ask if I was happy with the fence!!! 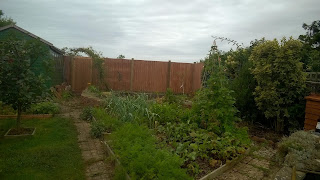 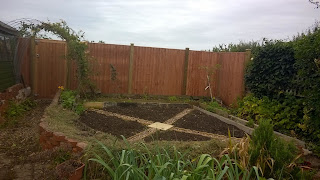 Him indoors had to move the large compost bin on the other side of the fence. He managed to fill a 25litre bag with our home produced compost. I was surprised we had so much because it didn't look as if what we had put in was composting down. Once the bin is in it's new position I'll start filling it again. Meanwhile, the tumbler composter is thriving and filling up nicely thanks to donations.
Tuesday - I fed the fish and watched them for a while (fascinating) then did a recce of the garden. I picked runner beans, peas (the second sowing is coming along nicely now), beetroot, spring onions, lettuce and mustard and cress. The chillies are coming along and so are the seedlings I transplanted a week ago. 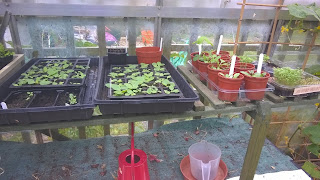 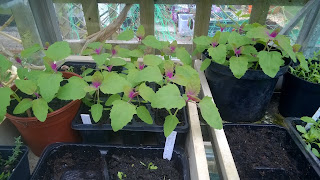 This is tree spinach. Oops - I've sown far too many again! 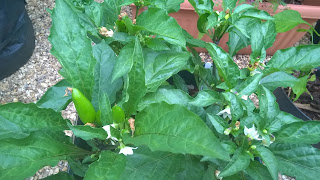 Razzmatazz Chillies
I also picked 5lbs of blackberries! And...the excitement of the day was not one, but two large squadrons of Canada Geese honking overhead on their way to the nature reserve. I heard them way before I could see them. This evening I was looking down the garden ,and because the new fence is slightly higher than the old one, I think it makes the garden look shorter but, on the other hand, it also makes the garden look wider.
Wednesday - I finally got round to sieving and storing the spud soil in the original potato bag then had a sort out in the pottering shed. When I buy in compost I tip it into a large container as it's easier to get to. The compost container is kept under the workbench and I hadn't needed it for a few days. This is what I found: 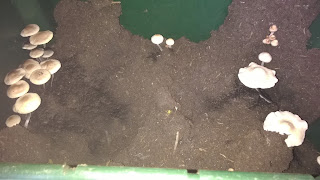 It didn't say on the packaging that every bag of J Arthur Bowers compost comes with free fungi!
Him indoors has made a new frame for the netting over the pond, just in case of intruders although the heron hasn't been seen for weeks. The morning after it was installed over the pond he noticed a small hole in the netting (yes, I know netting is made of holes but this hole wasn't a manufactured netting hole, it was a thread broken hole). Anyway, he tutted and patched it up. This morning when I was feeding the fish I noticed another 'not manufactured' hole in the netting. On closer inspection I noticed that there were still frogs in the pond...the culprits! I thought they had all moved on. I raised the frame a couple of inches to hopefully give them easy access for their nocturnal jaunts!
Thursday - when I fed the fish this morning there were no more extra holes in the netting. Very weird weather today, extremely close and humid but unlike the rest of the south, no sign of the rain and storms that had been forecast - although it certainly looked like it was going to. If it doesn't rain tomorrow I will have to water the garden. Even the water butts are nearly empty. Today I made use of the blackberries I picked on Monday and made some blackberry cordial (makes a delicious addition to sparkling wines, like Kir) and I also cooked up a batch of spiced blackberry jam which is mighty yummy (I had to taste it at every step to just to make sure,as you do!). 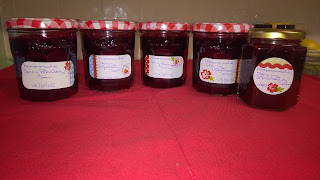 Friday - and it's raining proper rain. None of this silly misty in the air type stuff but proper stair rods and continued until late afternoon which is great news as the garden doesn't need watering for a few days and the water butts are now full again. Went for a stroll around the garden early evening and the rain has certainly encouraged the veg to grow. I picked another tray of runner beans and spied the first gherkins on the outside plants (they weren't there yesterday). 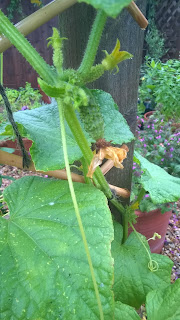 These are doing much better than the gherkin plants in the greenhouse.
﻿
One casualty of the rain is the lovely delphinium. The rain was too heavy for the flowers and the stem was bent over nearly to the ground. Thankfully it didn't break so I raised it and let the flowers lean against a bamboo cane for support. Watched Gardener's World this evening and in the 'things to do this weekend' section was remove the lower leaves from tomatoes. Ermmm, way ahead of you on that one Monty! And it's time to sow parsley seeds which I'll do next week.
Sunday evening - been away for the weekend and the first thing I did when I returned was feed the fish. It took a little longer for them to surface (probably sulking as not been fed since yesterday morning) but they eventually appeared and devoured the lot. I had a quick tour round the garden and I can see there is a lot to pick tomorrow. Re the delphinium, the stem of flowers is now standing upright of it's own accord - nature's amazing resilience. Watched Countryfile this evening (as always) and also followed the diverse viewer comments on Twitter. I also follow Kew Gardens and the RHS on Twitter, both of which are informative.
Well I think I'll close for this week. I'm looking forward to some more bottling and preserving, probably blackberry based hehe. A friend of mine grows cooking apples so maybe she'll trade. I think also, from checking the garden this evening there could also be something beetroot based.
Have a good week, weather looking reasonable for most of the country.
Regards,
DD
﻿