Dorset Garden Diary - Always Something To Do

I've just spent over an hour writing part of this blog and then lost it all - no idea how or why. So...here goes again.

Evening, it's amazing how quick Sunday comes around, doesn't seem five minutes since the last blog (and I don't mean the one I've just lost!). I hope you've had a productive week in the garden, mine has been busy although not all of it in the garden, but definitely garden related.

Monday - and I found a good home for some of the excess mixed Verbascum and summer berries Achillea I've grown. I took them round to a friend and received in return a carrier bag of windfall cooking apples to go with my blackberries. Whilst on a tour of their garden they showed me how well the delphiniums, geums and coreopsis that I gave them are coming on. Unfortunately, I came away with more than I bargained for; I was bitten on the back of the leg by something that was definitely searching for a good meal. My leg immediately began to swell and I had to stop off on the way home for some antihistamine cream and tablets (just a thought here - what do you do if you're allergic to antihistamine?). Back home and cream applied to a now big lump (no, not him indoors) and tablet taken. I then went out in the garden. First job was to straighten one of the grasses I'd planted in the cottage garden. It was leaning slightly to the left and my OCD couldn't cope. I then blitzed the weeds with weedkiller. Unfortunately, I had a little problem with the spray attachment and inadvertently sprayed a teensy, tiny bit onto the lawn (don't tell him indoors). In the evening I made another batch of blackberry jam - very tasty.

Tuesday - slept well last night. Up early, antihistamine applied and taken, then out in the garden as lots to do. The weather was crisp and clear with the promise of a gorgeous day ahead. I fed the fish which were a bit slow in surfacing this morning, then took a stroll around. A robin was sat on the top of next door's fir tree, beautifully silhouetted against the pale blue sky and singing delightfully. I tried to take a pic but I couldn't zoom in close enough with my phone - such a shame. I need a camera. At 10am a squadron of geese flew over then not fifteen minutes later another approached and as it neared, they broke ranks, changed position, reformed and carried on towards the lake. In the greenhouse I cut the tops off the tomato plants, trimmed off the leaves and removed all the remaining flowers as advised by Monty. 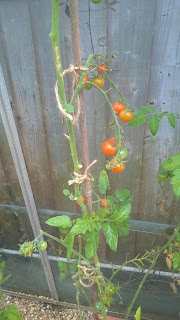 I also trimmed the cucumber leaves and removed quite a few flowers in the hope that, eventually, I will get more than one small cucumber trying to grow. There are so many flowers not fruiting, but the greenhouse does look pretty. Then, as I was going to be away for a couple of days, I fed and watered the greenhouse plants before giving the garden a good soaking as no rain forecast.

Wednesday - in Surrey and a visit to one of the largest and best garden centres I have been to. It was huge, plus there was a large indoor shop, a café/restaurant, grocery shop, butchery and in-store bakery. I could've spent all day there and I bet some people do. I bought a fruit loaf that tasted amazing - it was like a huge hot cross bun in the shape of a loaf. We then had a wander round and I made a note of the plants etc I wanted but didn't buy anything because there was somewhere else to visit first.

Thursday - and that somewhere else was the RHS Wisley Flower Show. I'd been looking forward to it for weeks. More about this in a separate blog but just to say we had a fabulous time and didn't come away empty handed. I did visit the 'information and questions answered' marquee. Apparently, one of the plants I have is ragwort so it's on with the weedkiller when I get back. The other question I asked was how to store root vegetables over the winter as I don't want to leave them in the ground (planting green manure). I have to be honest here and say I wasn't totally convinced with the answer about either storing them in the fridge or in damp compost. I'll think about it.

After the show we decided to go back to the garden centre for lunch and buy the things we made a note of yesterday: a wind spinner for the pond area to hopefully keep away the heron, a pagoda statue that thankfully can be dis-assembled then reassembled in situ, an unsual stone sundial - the latter two were heavy, going by him indoors' face as he loaded them onto the trolley! I'll post pics of these when they are in place. We also bought bonemeal, herbs, a terracotta pot for the 'For Your Eyes Only' rose (half price) another grass then headed for the butcher and baker departments where we had a bonemeal incident. Unknown to us, the bottom of the box was broken and we were leaving a trail, then a little (well, actually, not so little) pile when the trolley stood immobile. I gave the leaking box to a member of staff who looked at me as if to say 'what do you expect me to do with it', took another off the shelf and headed for the checkout. We left the nursery with an overladen trolley that, true to form, was programmed with a mind of it's own, then we had the task of fitting it all in the car. I also bought a couple of biodegradable leaf sacks (bogof) and...two large hessian veggie storage sacks - so problem solved. 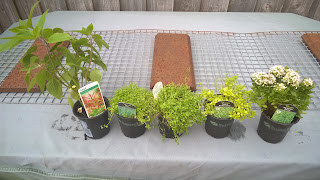 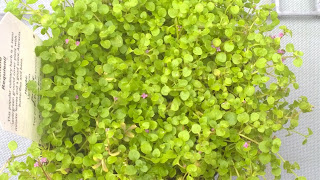 Can you see the tiny blue flowers on the Mentha Requeinii? I am going to plant these and the thyme in cracks on the pathways so hopefully, when we walk around, their scent will be released 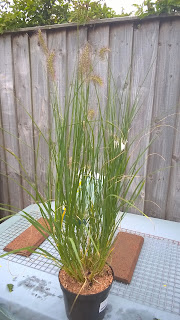 Pennissetum al Hameln which is going in the cottage garden

Friday - back home and purchases unloaded and on the patio waiting to be planted and sited. Fed the hungry fish who surfaced immediately (obviously missed me), checked the greenhouse and look what happened when I turned my back for a couple of days: 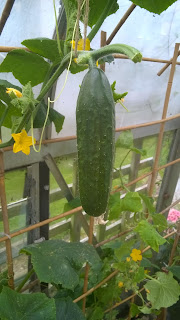 A cucumber!!! It was only about 3" long when I left on Tuesday

The gherkins have also grown and I picked some more to pickle. And this lovely primula has come into flower: 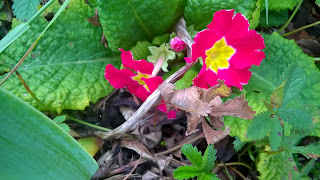 In the cottage garden I planted Pennisetum al Hanelm (grass), Anemone 'Panima', Verbena Bonariensis 'Lollipop' and Rudbeckia Triloba Prairie Glow (it has burgundy and gold bi-colour flower). I also planted Hypericum 'Miracle Grandeur', a bush-like shrub that bears red berries and yellow flowers at the same time. It's glorious and chosen by him indoors. We bought one for the front garden as well. 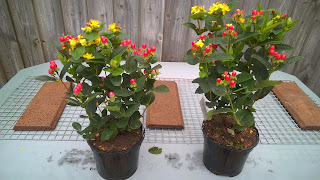 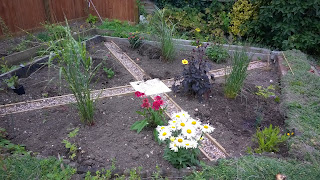 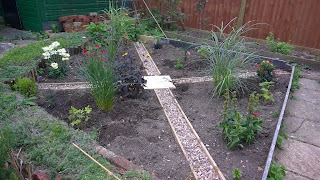 The cottage garden from two different perspectives. I have drawn a plan of the garden and written in the name, height, spread and siting of the plants in case my memory deserts me, although I have kept all the name tags in no particular order.

I checked the small compost bag at the top of the garden and the contents have composted down nicely so I can start adding to that again now. Also zapped the ragwort.

Him indoors made a lemon verbena cake which was, in the words of the song, truly scrumptious. Meant to save you some but you know how it is...just one more slice!! I've been at work all weekend so not had a chance to get the rest of the plants in, but at least it will give me something to talk about next week. And, I forgot to mention, I now have a camera. An idiot-proof camera...but I still need to practice with it. Exciting!

Well, I think that's enough for one week. Not sure if it's gardening weather this week but I'll give it my best.

Have a good week.