Well it appears that Summer has come back for a welcome visit. The past few days have been glorious - I even retrieved and donned my gardening shorts (no pic you'll be glad to hear). But don't be fooled, the night's have been cold. It's been a good week with plenty to do:

Monday - came home from work and the fish were waiting eagerly for food. I'm pleased the older goldfish are overcoming their fear of whatever it was that scared them a few months back. I arrived home with yet another carrier bag full of compostable material - the compost bins are nearly full now. Had a walk round to make sure all ok. A couple of cucumbers are steadily growing in the greenhouse yet others are dying after reaching and inch or so...strange. I'll be pleased  to hear from anyone who might know why this is. 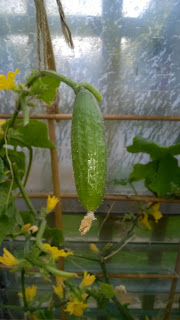 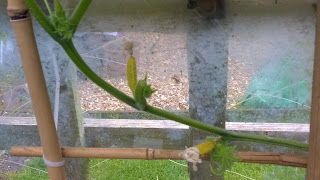 Amazing sunset this evening. I took a few photos with my new camera which I will, hopefully, upload and show you soon.

Tuesday - and the fish waiting to be fed again this morning. The pond is healthy, the water crystal clear and it's lovely to see them splashing around for the food. I have a few days off this week so there is a long list of jobs to do. I was going to pickle more gherkins but they are growing slowly and not quite to the size him indoors prefers. All the pots and trays need cleaning but I couldn't get the safety lid off the Jeyes Fluid. Him indoors is away for a few days and it appears my neighbours have all disappeared! So I busied myself tidying up and picking ripe fruit and veg - the tomatoes are suddenly all starting to ripen.. I also collected more fallen leaves for composting then noticed that the apple tree leaves have white mildew on them. Unfortunately I can't compost them or the leaves they came into contact with in case of contamination. I picked all the ripe chillies and this evening made some chilli-infused oil. I think it's going to be hot as my eyes watered when I took the top off the processor. I heated the oil and chillies then left it to cool. Whilst I was sterilising the kilner bottles, one of them cracked which is surprising, I thought they were supposed to withstand heat. Once the oil had cooled I sieved it through muslin and bottled it...looks amazing and hoping it tastes it. 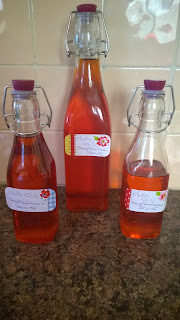 Wednesday - an out of the garden day today. This evening around 6pm I was driving to meet someone and the sky began to fill with v-shaped squadrons of geese travelling back to their night time roost; spectacular. Then, later in the evening I was driving through a local village and we saw a mother duck and four ducklings waddling down the road. I stopped an tried to take a pic but they were intent on their mission and weren't going to stop for anyone.

Thursday - noticed new growth on the rose bush and the cucumbers are growing well. And...I finally managed to get the Jeyes Fluid can opened so that is now a job for the weekend. It's been very windy here this week and this morning quite a few of the potted plants were wilting. I have watered them regularly but obviously the wind is drying them out and I nearly lost some coreopsis. I gave them a good soaking and fingers crossed they'll pull through. I have some plans for the front garden (I'll touch on that soon) so I've decided to try and grow a passion flower. I have some fruit from next door's which aren't ripening, so I've planted some of the seeds and see what happens. I'm also trying a stalk cutting dipped in rooting powder.

Friday - a case of if you don't ask you don't get. For weeks now I've been passing a house that has some rockery stones piled up by the gate leading to their back garden. I walked passed this morning and they were still there so I made the decision that, on the way back, I'd call in and ask if they were spare. Deep breath and rang the bell. I apologised for being cheeky but were the stones spare? The woman called her husband who said yes, they are spare. He was going to use them but doesn't need them now as they have decided to move. He said I would be doing them a favour if I took them, so I went back later this afternoon and although the car groaned under the weight, I am now the proud owner of a boot-full of rockery stones to add to my collection. This evening's Gardener's World was apt for me - I didn't know that scraping sweet pea seeds helps them germinate (glad I haven't already planted some) and also how to plant garlic (this year's crop failed due to leaf rust). Monty also said to trim lavender and roses...typical, just as the rose is sprouting new growth.

Saturday - a very productive day although it started with me bending the spade - obviously don't know my own strength! . 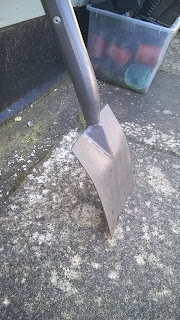 And posing in my new shoes: 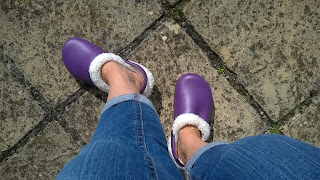 The cucumbers appear to have grown overnight and something has been eating my cottage garden plan on the pin board in the pottering shed. I planted 100 allium bulbs plus some unknown bulbs that I came across whilst tidying the pottering shed. They are unlabelled because I obviously thought I'd remember what they are...well obviously not, at my age! I also, finally, got round to washing and cleaning all the pots and seed trays. Think I have enough now: 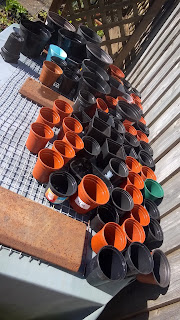 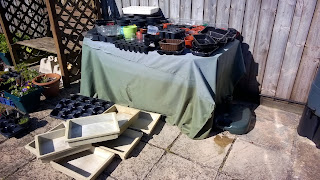 Sunday - an expected spurt of energy this morning. Sauntered downstairs for a coffee and happened to glance out the conservatory windows in time to see a large heron striding across the lawn towards the pond. You've never seen me move so fast and it's amazing how quickly a heron can take off from a standing start, Harrier Jump Jet eat your heart out!. So another item on my list for today - heron scarer. I fed the fish but the adult fish wouldn't come to the surface, although the fishlings hungry as ever. I hope they haven't been spooked again as it's taken months for them to venture out after the dipped net incident. The heron was beautiful and so graceful but sorry...you're not having my fish! I dug over the veg patch (more on that next week) whilst thinking what to do and I have now cordoned off the pond with string and hung shreds of an old bed sheet on it that I found in him indoors' workshop (for once I'm pleased he's such a hoarder!) 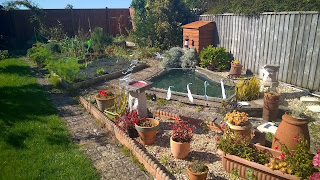 Not aesthetically pleasing, I admit, but hopefully the heron will back off and the fish will be protected. I fed the fish this afternoon and a couple of the oldies appeared so hopefully no lasting damage. Forgot to mention, this weekend the garden has been a-buzz with huge bumble bees, butterflies and dragonflies.

I think that's probably enough excitement for this week. All that's left to do is give everything a good watering after dinner. And if you happen to suffer from insomnia then look out for the total eclipse of the super moon tonight, it's going to turn blood red apparently.