Well, it's been another week of storms - storm Jonas and storm Gertrude hit our shores. Did anyone else see Winterwatch on BBC2 this week? Amazing footage of the diverse weather we are having, plus spectacular wildlife shots from the Cairngorms. Here in Dorset it's been cold, frosty, windy, mild, wet and sunny.

Monday - the day started with another pink and orange sunrise but clouded over during the morning. Very warm though, temperature up to 14 degrees. I dug over the two vegetable beds and removed all the weeds. Last year the soil was clumpy and heavy but the green manure I planted in September and dug in late autumn has improved it immensely; it is now rich, soft and full of earthworms. When I planted the green manure I left a section free for the carrots as they prefer poor soil. I fed the fish as they were on the surface - and hungry. I then went shopping as I had a voucher for a free pack of seed potatoes, but of course, it doesn't stop there! Besides my free potatoes (Maris Piper second early)  I also came away with a pack of Pentland Javelin first early, a pack of mixed onions and a pack of shallots. And...(not finished yet) packs of seeds: spinach beet, pak choi, gherkins, fennel, celeriac, kaleidoscope beetroot, runner beans (desiree) and peas (hurst green shaft). That should keep me busy.

Tuesday - today started with a blood red sky. The saying 'red sky in the morning shepherd's warning' certainly applied today. We were on the periphery of storm Jonas and the weather was atrocious, strong gale force winds and lashing rain. So I took the opportunity to order some seeds online - Okahijiki (Chinese leaves) and rock samphire, both tasty in stir fries, salads and with seafood.

Wednesday - I moved the freesias and garlic back into the greenhouse as a frost was forecast overnight. I was in the dining room and could hear seagulls squawking and see them circling overhead before taking it in turns to dive so I went upstairs for a better look and on the roof of the back shed stood the heron, majestic and unperturbed by the dive bombing seagulls. I took a couple of quick pics with my phone but by the time I got the camera out it had flown away, yet again. 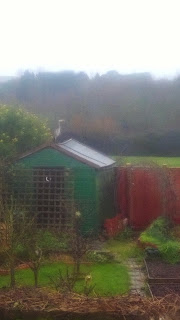 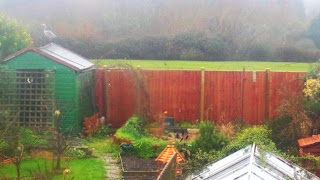 In the afternoon I prepared some food for the birds. Firstly the fat balls, melting the lard then adding seeds, bread and dried fruit. Once it had cooled I put it in yogurt pots in the fridge to set. And from the RSPB site I made and hung out an apple studded with black sunflower seeds and made a ring of bread, chunks of cheese and apricots threaded with garden wire. 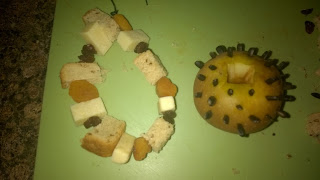 That should keep the birds well fed.

Saturday - I was unable to get out in the garden the last couple of days. Today was forecast rain but...it didn't. It was a lovely sunny day, albeit cold and windy, possibly the remnants of storm Gertrude. I cleaned the bird table and replenished the food. The apple and the fruit ring have not been touched which is surprising as blackbirds and the song thrush eat fruit and we have those visiting the garden. I covered the vegetables beds with plastic to a) keep any cats off, b) stop the weeds growing and c) keep the soil warm for planting in the spring. 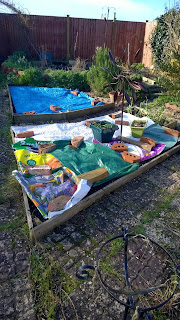 I checked the seeds I'd sown last weekend and the radish and micro radish have put on a spurt. 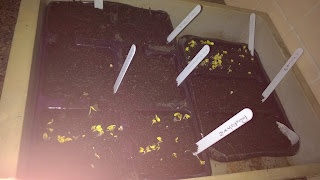 Nothing else coming through yet. I sowed some broccoli, parsnips and kale and was going to sow leeks but the packet was empty so I'll just have to go shopping again! I put the seed potatoes in egg boxes to chit. 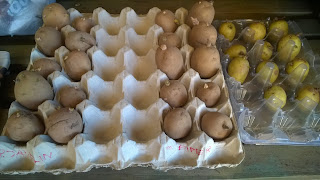 Checked the greenhouse and watered where necessary. The seeds I ordered on Tuesday arrived today.

Sunday - rain overnight then started to clear slowly. I did my RSPB birdwatch between 9 and 10 this morning. Now normally the garden has birds flitting in and out of it...but not this morning. Typical. I know they're around because the food is being eaten. It could be because it was windy, but all that came into the garden was one magpie, one wood pigeon, one jackdaw and one blue tit. I recorded the results on their website and advised them of the birds that normally visit. It was very peaceful, sat for an hour watching the garden. I potted up the radishes and put them in the greenhouse. And it appears the micro radishes I'm growing have been mislabelled, they are actually triffids in training...they've grown nearly an inch since yesterday evening! 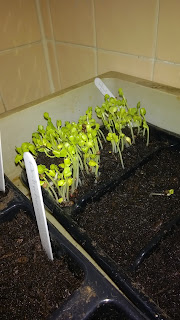 The next job was to move the bird bath away from the bird table as a magpie had worked out that if it jumped onto the bird bath it could then get onto the bird table. It can't now! Him indoors will not be impressed when he finds out I've moved it as it's heavy, but I was careful and rolled it into position.
Well the weather forecast isn't brilliant for the week ahead...storm Henry is rolling in. Hopefully there'll be an opportunity for some gardening. Have a good week and catch up next Sunday.
Regards,
DD
Posted by Daisy Digga at 21:38