Dorset Garden Diary - Winter is on it's way

Well it's back into the swing of things again and plenty to do in the garden as it's not only the flowers that are thriving in the warm, wet weather...the weeds love it as well! Apparently, December has been a record breaker for warmth and, in some places, rain.

For most of the week the garden has been a no-go area due to the heavy rain and high winds. Tuesday started dry and four degrees colder than it has been recently. I watched an unusual amount of sparrow activity early morning whilst having breakfast in the conservatory. They were flitting about all over the place..hasn't happened any other day this week.

Wednesday and Thursday were a washout. Friday started dry and cold but soon warmed up. I had a recce of the estate; the rose is still budding and flowering as are the echinacea, daffodils, campanula, viburnum and clematis. The alliums are springing up all over the place. New leaves are appearing on the lupin: 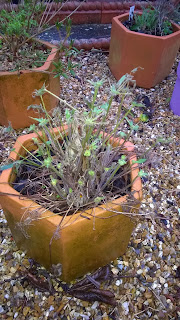 one of next door's trees has come into flower: 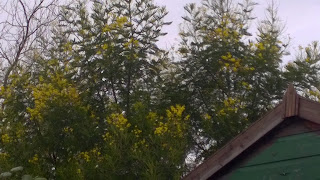 my hebe cutting is thriving: 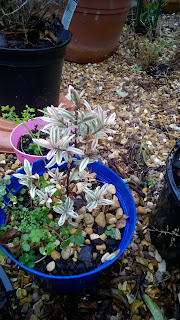 the borage I planted late autumn is also thriving: 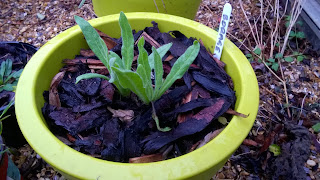 and...the one lemon on my lemon tree in the greenhouse has turned from green to yellow yay!! 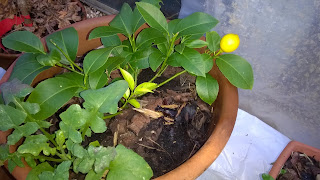 The sweet peas appear healthy and have stopped growing for the time being. 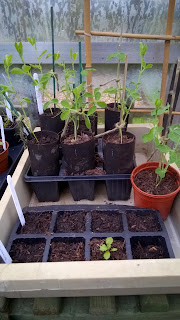 Saturday -and the day started with a glorious muted sunrise that bathed everything in a pale liquid gold glow. It was surreal and I tried to take a picture but unfortunately it didn't do the colours justice. I walked into town this morning, passing a garden that has a magnificent magnolia tree in the front garden. Not only does this now have large buds on it but also a couple of flowers - way too early! When I came back I watered the greenhouse and intended to spend some time tidying up the garden but yep, you've guessed it, it started raining. And not just normal rain but torrential heavy rain that made big splats in the puddles on the patio. So I abandoned the gardening and had to resort to leafing (no pun intended) through the seed and plant catalogues that have been falling through my letterbox with regularity these past few weeks. I wasn't intending to, as I don't need much for the garden this year as I've collected seeds from everything I want to propagate, but I did, and yes, I have found some plants and shrubs that I simply have to have in the garden!

Sunday - the morning started bright, dry and cold although the sunrise was not a patch on yesterday's. I fed the fish - I won't be able to call the young ones fishlings soon as they are growing rapidly. I checked the gammon fat I hung out couple weeks ago and the birds have been eating it which is good. As the weather seems to be getting colder this week I also hung out a couple of fat balls (balls of fat!) and some peanuts. I was in two minds about putting the robin food out as I'm sure the squirrels had it last time (I am going to buy a squirrel-proof feeder) but in the end I decided to give it another try - I've raised it off the ground this time. On the packet it says that the seeds can be scattered on the ground but I don't want to encourage rats. I turned the rotating composting drums then added more material. Some of the apples I've stored have gone to mush so I put them in. The leeks I dug up in December and stored in the garden under soil had rotted because we've had so much rain but I can't compost them as the leaves have rust disease and I don't want to contaminate the existing compost. I pulled up some of the baby leeks that were late growers and I will freeze them. There are a few more to pick then that is the last of the crops from last year. I think I can say that, on the whole, last year's gardening was a success. By lunchtime the dry, sunny weather had morphed into cloud and early afternoon we were treated to a shower of hail and sleet. The sun then came out again and tonight we are forecast thunder storms.

The indoor plants are also thriving apart from the winter jasmine, I may have watered it too much. I planted the amaryllis (Lady Jane) I received for Christmas - let's hope this produces a stalk and flowers. 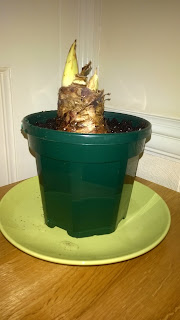 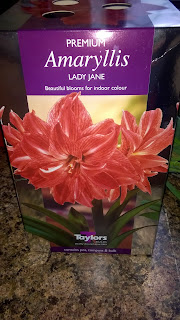 The existing one is still healthy and still all leaves and no stalk. The longest leaf is now over 30" long! 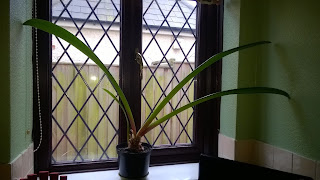 The cyclamen is putting on another good show, I've had this for over five years: 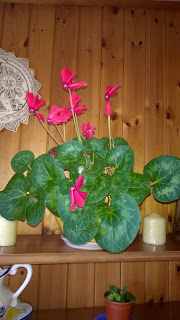 And this plant usually sits in the lounge but I moved it to make room for the xmas decs. It's loving it in the conservatory so I think I'll leave it there. 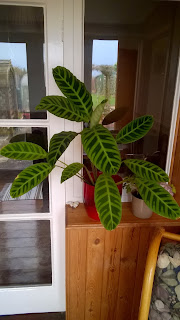 Watched Countryfile this evening and the weather is set to get colder this week, a real touch of winter with snow, ice and frost. There is a plastic disc (like a small frisbee) floating on the pond. If the surface of the pond freezes the water under the disc won't and the fish still get oxygen apparently. Let's hope it doesn't get that cold.
Have a good week, stay warm and you never know, there could be a pic of a snow scene and snowman on next week's blog.
Regards,
DD﻿
Posted by Daisy Digga at 20:22