I hope you've all had a chance to get out in the garden this week. Apart from one day, it's been a perfect gardening week here in Dorset and I've taken full advantage of it.

Monday - it was frosty this morning, the early temperature was 35C 1F but this didn't deter the blackbirds from squabbling and hogging the bird table. I made up some more food with bread, bird seed, sunflower hearts and lard then I spent a couple of hours sowing seeds...very therapeutic:- pak choi, winter squash, okahijiki (Chinese leaves), tree spinach (chenopodium giganteum), courgettes (courcourzelle), gherkin diamant F1 hybrid, celeriac monarch, rock samphire (arithmum moritumum), some more sweet pea mixed scent (as you know, I did a sweet pea sowing in November. I will compare the plants to see which flowers best), marigolds from last year's flowers, quaking grass, verbascum mixed, ragged robin (good for butterflies) and zinnia hot mix. These are all in pots and shallow trays in the house until they start to grow, as the greenhouse isn't heated and it's still cold at nights.

Last year I sowed too much of each veg so I've tried to not sow as much this year, which is difficult for me because I find it addictive!

Tuesday - a very frosty start to the day, 35C 1F again. Both bird baths were frozen but thankfully not 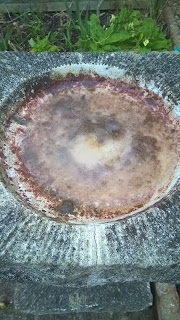 the pond; the daffodils suffered though. 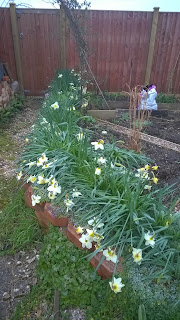 It was a strange frost because it didn't catch everything in the garden, just intermittent patches. I spray-misted the seed pots and trays then fed the birds (too cold to feed the fish). The blackbirds were chasing each other around the base of the bird table. That was all I had time for as I was going to work. It was a lovely day and warmed up a little but started to deteriorate towards the evening, with the wind picking up.

Wednesday - atrocious weather came in overnight, high winds and lashing rain buffeting everything. I was anxious to get home in the evening to check there was no damage...thankfully, there wasn't. The wind had been coming from a north-easterly direction and the garden is protected from that side.

Thursday - much warmer this morning and no frost 40C 4F. I fed the fish, topped up the seed feeder and bird table. I've bought another seed feeder as the sparrows and blue tits quickly emptied just one. I tidied up the twig debris from the strong winds then sprinkled mixed perennials, flax and poppy seeds on the flower bed where the miniature pond is. I've scattered them in and around the hellebores and anemone which, in the summer, spread across the bed. I'm hoping the seeds will grow and flower in between. The next job was cutting back the dead growth on the strawberry plants and re-potting them into a hanging basket, a very time-consuming job. I lined the hanging basket with moss from the garden and put some shallow-rooted rockery plants on the top. Hopefully the strawberries will trail down. 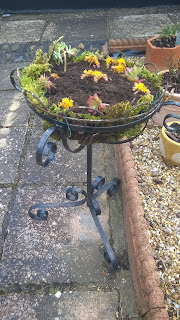 Friday - today started dull and cold 6C 43F, then developed into a lovely balmy day. The blue tits were active early morning flying in and out of their nesting box with bedding material. Him indoors is now semi-mobile so he made a start on the list of jobs to be done that I've been saving up for him! Firstly, he took the small table and chairs from the top shed and put them by the pond; then he cleaned the pond pump and checked it was working properly. He then removed half of the pond weed - I don't know what it's called but it provides cover for the fish and oxygenates the water. 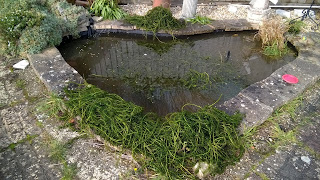 The fish were on the surface for much of the day, some of them are getting quite big now. 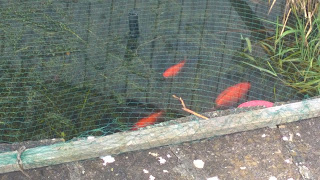 I pruned back the perennials that are in the pots near the patio area as new shoots and leaves are starting to appear. I was wondering what to do about the ornamental grasses, whether I should cut them back or not, I decided to leave it for now. That evening we watched Gardeners' World and the first job on Monty's list was cutting back ornamental grasses...no such thing as coincidence! So...if the grasses are deciduous then all the old growth should be cut back to the roots but if they are evergreen then pull out the dead leaves and shoots with your hands (but don't do this with pampas grass unless you have thick gloves on as the leaves are sharp). Other jobs for the weekend were cover the soil on the vegetable beds to warm them up for planting - already done. Prune back buddleia - already done.

Saturday -another frosty night 36C 2F but by 8.30am the frost had gone and the warmth of the sun was coming through nicely; crystal clear blue sky for most of the day. By 11.30am the temperature in the greenhouse was 63F 17C. It was another productive day in the garden. Him indoors spent quite a bit of time getting the pressure right on the pond pump as the water was falling too heavily into the pond. He then put all the weed he'd removed yesterday in the back compost bin, We always leave any weed we remove from the pond on the edge so if anything is caught up in it, it can get back into the water. His next job was to make an adjustment to the base of the bird table to try and stop the larger birds (pigeons etc) being able to grip the edge and eat all the food. 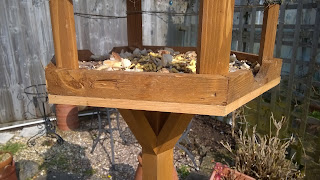 When I made up the bird food on Monday, instead of using wholemeal bread (which I normally use) I used white bread. Well, it appears that the blackbirds prefer wholemeal as hardly any of the white bread has been eaten - they are obviously health conscious! Him indoors also put up the frames ready for the peas and runner beans...he's done a good job and lovely blue sky: 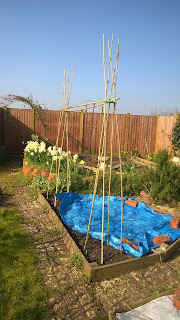 No sign of the fish today, probably sulking because we've messed with their pond. This year there are celandines flowering by the pond, they weren't there last year: 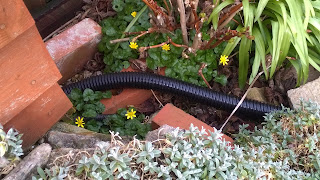 We both had a couple of senior moments today. Him indoors inadvertently threw away a container with the garden rubbish and had to go and retrieve it, then, when he was adjusting the pond pump he broke one of the sails off the windmill at the edge of the pond: I was emptying a big bag of bird seed into a large container, missed and poured it onto the pottering shed floor then later I was weeding the cottage garden ready for more plants 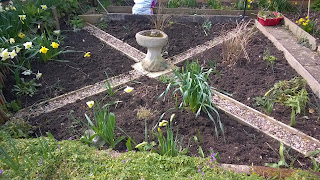 and I had an old washing up bowl next to me to put the weeds in. I started daydreaming, then realised I'd been throwing the weeds into the birdbath so I had to empty, clean and refill it! I also had to put some of the gravel back onto the path as the birds have been flicking it into the soil.

I planted the redcurrant bush. 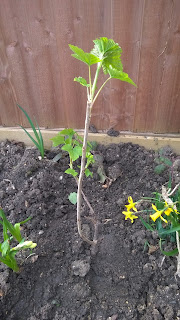 There are new buds on the quince tree: And the daffodils have recovered from the frost: 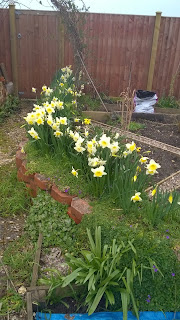 I re-potted the cuttings I'd taken of salvia hot lips, blackcurrant sage and parsley, then watered all of the pots in the garden and the greenhouse as they were looking dry. The parsnip seeds have started to emerge: 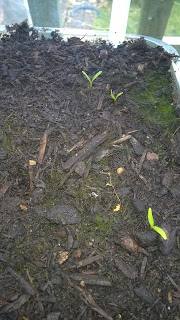 And the pak choi I planted on Monday have taken me by surprise, this is five days from sowing: 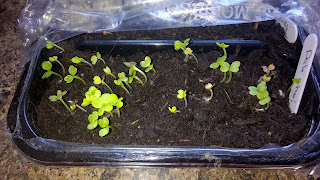 There was a spectacular watery sunset this evening before thick fog descended.

Sunday - misty morning 4C 40Fand a chill wind. I fed the birds and the fish were swimming near the surface, so we've been forgiven. Tested the pond pump and the flow is fine. Him indoors gave the lawn it's first cut on a high setting..looking good: 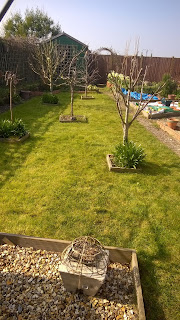 Watched Countryfile this evening, as always, and the weather for the week ahead is dry, a chilly wind and frosty nights. I'm happy with that. Feeling pleasantly shattered this evening from the fresh air and my exertions in the garden. Have an enjoyable week, hope you can get out in the garden and catch up next Sunday.