Dorset Garden Diary - Digging, Weeding, Cheeky Pigeon and Great to be out in the Garden Again

I hope you've all had a good week and kept warm. At last, I've had time to get stuck into some gardening this week. The weather has been cold so it's been bracing out there, but I soon warmed up with all the digging.

Tuesday - yesterday was cold but not frosty, 3C (37F) and sunny. This morning it was 10C (50F) and wet. The fish were visible so I fed them then fed the birds. I bought some dried mealworm to mix in with the seed. I know they're dead but I could've sworn they were moving. I had to put gloves on because I can't touch them! There was pair of blackbirds and a robin waiting patiently. Later in the day I saw a pigeon trying to balance on the edge of the robin feeder. It was putting one wing through a gap in the cover to flick the food towards it. Well, 10 out of 10 for ingenuity - it deserved it's reward...but I won't be beaten! It was very windy late afternoon and turned very cold. Saw this bee sheltering on a side wall away from the wind - not sure what type it is. 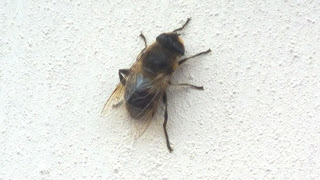 I had all good intentions of doing more digging today but I didn't quite get round to it - well, it was cold this afternoon!

Wednesday - the day started cold, extremely windy and sunny at 6.45am. By 8.30am it had started to cloud over and by 10am we had hail and snow (storm Jake). It only lasted about 10 mins but it was very intense. 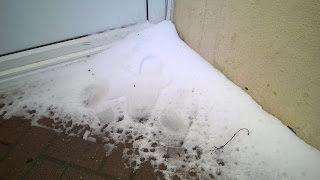 It was bitterly cold in the wind so in the afternoon I once again postponed the digging and instead potted up the chilli and tomato seedlings that have grown and transferred the kale, broccoli and clematis pots to the greenhouse as to harden up.

Thursday - cold and dry but no wind. I had big plans for today. First I fed the birds - the sparrows and blue tits had an early breakfast this morning. I then decided to try and outwit the pigeons by rigging up the robin feeder so they can't get their wings through - new improved version exhibit A. 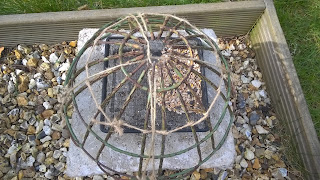 I then decided that I needed to do something more with the bird table just in case the pigeons had a cunning plan to get on their as well so I put some more string around the feeding area just above the original wire. Later in the day I noticed a dove clinging on to the edge of the bird table and feeding. As a friend suggested, I need to make the feeding base of the table deeper so they can't get a grip. But...doves are so nice!

Next job on the list was to finish spiking the lawn, by this time the day was warming up and so was I. The temperature in the greenhouse at midday was 18C (66F). I left the greenhouse door open for a couple of hours to cool it down a bit as it was quite humid and not good for the plants (too much change in temperature) as a cold night was forecast. After I'd finished the lawn I noticed that the miniature pond was looking a bit murky and had algae around the edges so I cleared it all out making sure I didn't disturb any inhabitants then topped it up with rain water. Some of the fish in the main pond were enjoying the balmy day so I fed them. 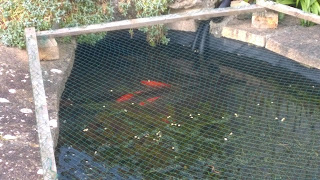 Interesting to see that some of last year's fishlings are starting to mature and turn orange.

Next on the agenda was the small bed at the back of the greenhouse near the pond. I started digging it over and removing the weeds and came across three spring onions. Before and after pics: 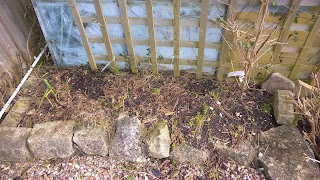 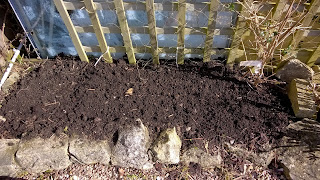 As I was walking back to the pottering shed I noticed some bubbles on the surface of the pond. I peered into the water and a frog (or toad), greyish in colour and about the size of my palm, lazily swam down into the water, back legs kicking. I suspect the fish will be inundated with frog spawn anytime soon. Reluctant to stop working I decided to start digging over and weeding the top bed near the back fence. This is overgrown and raspberry runners (roots) are everywhere, so it was quite time consuming. 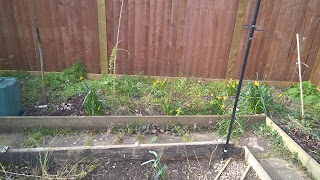 It's also near the seed feeder and the sparrows were very vocal in their indignation that I was stopping them from feeding. I did about a third of it.

I don't know if you remember but late last year I received a delivery of 48 ground cover plants that I had to pot up because I hadn't decided where I wanted them to go. I labelled everything and drew a diagram so that I would know what was what. Then I had to move the troughs near the greenhouse because the birds kept pulling them up. 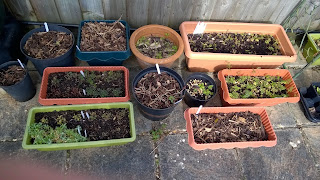 I've checked on them periodically through the winter and they are doing fine. I checked on them again today. Problem. The winter weather has eroded the writing on the plant labelling sticks. I still have the plan but there is more than one variety in each trough. I recognise some of them (yes, I know where the carrots are!) but the others, well, I'll just have to plant them and see what happens. Best laid plans and all that...I thought I was being very efficient.

Friday - another cold day but not frosty and no wind. Fed the birds - the sparrows and blue tits are getting through a feeder a day. The sweet mini peppers that I am tying to grow from saved seeds are coming along nicely 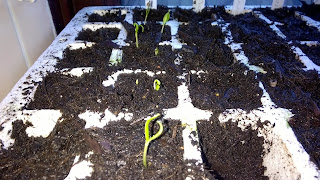 and in the greenhouse the parsnip seeds are just pushing through but a bit too small to photograph yet. The three parsnip tops I saved and planted are also doing well, I will plant them out soon. The azalea cutting had grown quite big so that's now been re-potted. I am pleased with this. Not sure if you remember but I broke off a bit of twig re-potting the mature plant. 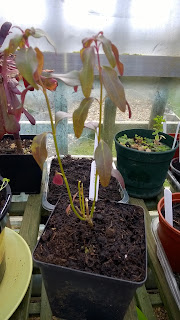 Now, I've always thought that plants should be re-potted into much bigger pots but apparently you only need to go up one size, about half an inch or so all round. I finished digging and weeding the back bed - I can actually see what's in there now, and I cut back the dead growth on the lemon balm. 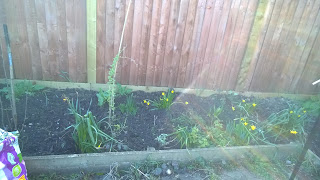 It's going to need compost digging into it as the soil is mainly clay and very lumpy and heavy. I removed the cover I had put over the rhubarb to 'force it' and nothing is happening. Either I put the cover in the wrong place (quite possible) or the force is not with me on this occasion. 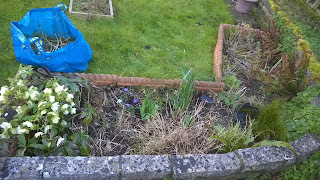 On a roll now, the next job was to tidy up the bed where the miniature pond is. I stripped back the dead growth and dug over the soil. I have left the far corner where leaves have congregated in case there is something still hibernating in there. 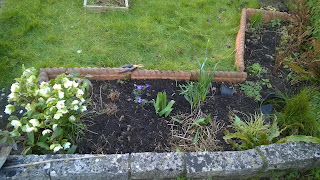 I went shopping this morning for yet more bird food and I bought some robin food ' insect medley' yum yum yuk urgh! 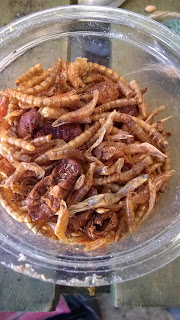 Growth starting to appear since last week are poppies, giant alliums, aquilegia, potentilla, a couple of wallflowers that don't normally flower until April and the rose. And this tiny anemone has spread and bloomed - so exquisite: 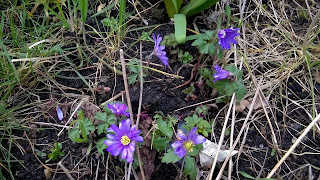 So, it's been a productive week. The only thing I haven't done on my list is to make headway into seed sowing but I'll make a start on that next week. I watched Gardeners' World this evening (glad it's back!) and jobs to do this weekend/next week are cut back the autumn raspberries and the late flowering clematis.

Saturday - cold and sunny out the front, cold and dark clouds out the back,2C 35F. I had to work all weekend so I watered the greenhouse and fed the birds...it was too cold to feed the fish.The blackbirds were up early feeding from the bird table, one female blackbird was sat right in the middle hogging all the food. I could see a couple of birds on the back fence but couldn't make out what they were so I fetched the binoculars and it was a male and female robin. The male was doing his courting dance and singing, the female playing hard to get. It was fascinating to watch, and not just by me - the audience of sparrows were enjoying every minute!

Sunday - home while it was still light and did a recce of the garden, all is well. I watched Countryfile this evening and the week starts off icy and cold but gets warmer as the week progresses so looks like it could be a good week for gardening fingers crossed.

I hope the weather will be kind for gardening wherever you are. Have a good and safe week and catch up next Sunday.