I hope your week has gone well...it's been an interesting one here, not all gardening but plenty of it concentrated into a three or four days. The weather turned milder for most of the week, ending on a windy note - just for a change!

Sunday afternoon to Tuesday afternoon we were away, so there was plenty to do Sunday morning. Him indoors adapted the bird table yet again to (hopefully) stop the pigeons and magpies getting on it. 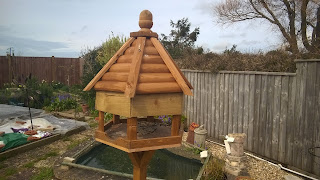 I planted some of the sweet peas along the bottom of the back fence and by the greenhouse, put  mixed achillea plants grown from seed in the cottage garden and planted out a few early parsnip seedlings then watered them in. Checked the new seedlings, watered the greenhouse, gave the fish plenty of food then topped up the bird table and the seed feeders.

All done and first stop was the donkey sanctuary near Sidmouth, Devon. Meet Walter, our newly adopted donkey: 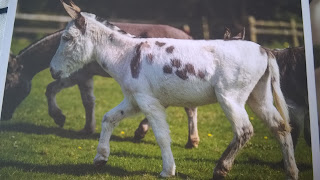 Apparently he is a fun-loving, cheeky, lovable chap with a half-brother named Timothy. Not only does he try to break into the food shed, he's also their star footballer, often showing off his skills in the paddock. Cute eh!

It was then off to Somerset for an overnight stay before visiting Slimbridge water and wildfowl centre. It's an amazing place which deserves a separate blog. I took pictures of these bug houses which I thought were ingenious: 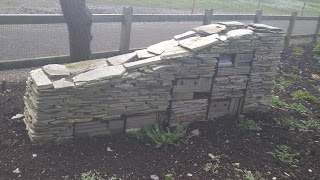 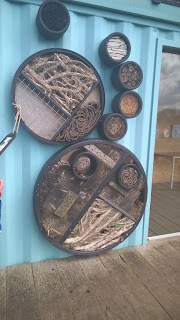 Tuesday we visited Stourhead in Wiltshire. It has mature gardens, magnificent trees and a wide variety of rhododendron bushes, magnolias, a large lake and a stately house. Again, this merits a separate blog. Back home late afternoon and straight out into the garden. Since we left on Sunday we now have apple blossom 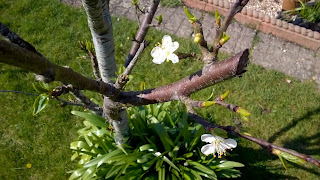 and the radishes are poking through. 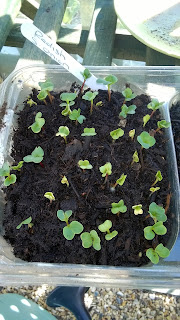 I planted the dahlias in the cottage garden plus verbascum (mixed and arctic). Sowed flaxseeds and re-potted the azalea I've grown from a cutting. I had to top up the potato bag with the 'unknowns' in as they were already poking through the soil.

Wednesday - him indoors stood looking at the dismantled greenhouse that had been kindly delivered last week by a friend for a reasonable price and a plentiful supply of chocolate and hazelnut Danish pastries! Hopefully, it will be assembled during the summer once we've decided where it's going. Having a cuppa in the conservatory (it's thirsty work looking at a dismantled greenhouse), him indoors watched a cheeky magpie penetrating our defences and get on the bird table, so it's back to the drawing board...again! But at least the pigeons haven't worked it out...yet.

And that was it until yesterday. Him indoors has had another operation on his foot so will be out of action for yet another few weeks - just imagine how long that to-do list is going to be!!

Saturday - sunshine and showers and back in the garden, temperature rose to 56F 13C early afternoon. First job, as always, check the fish are still there and feed them (yes they are, but the frog spawn has gone), fed the birds then checked on the garden. It's amazing how quickly plants grow when you don't check on them every day. The fritillaria are taller: 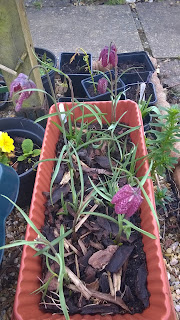 This is Pulsatilla Halleri Grandis - looks interesting. Bought it last year and this is the first time it's coming into flower. 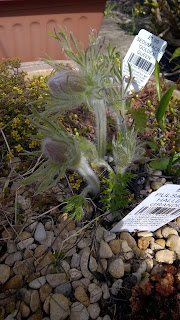 The apple, pear and cherry trees - still waiting for growth on the plum tree 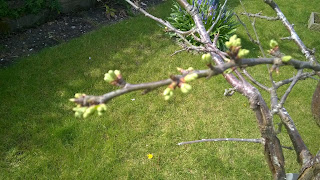 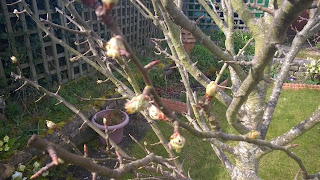 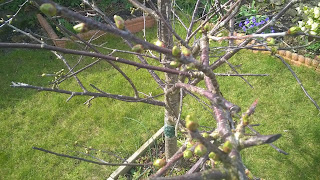 The unnamed potato breaking through again after three days 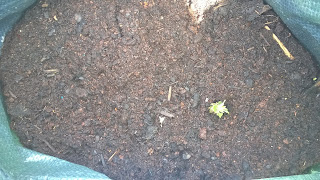 The shallots are doing very well 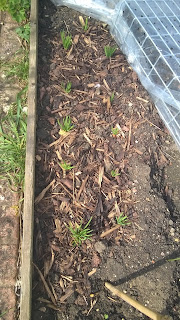 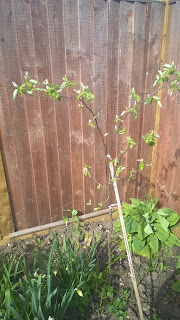 The redcurrant bush appears to like it's position in the sun 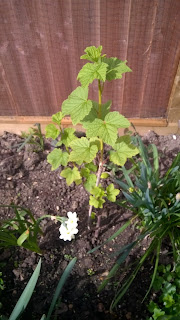 And the first pea shoot has appeared from the outdoor sowing. 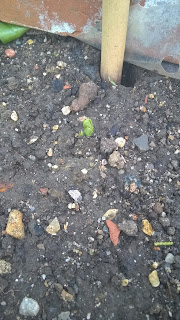 Sunday - cold and chilly this morning (45F 7C). Clouded over this afternoon, only up to 48F 9C. Very windy and rain came in late afternoon. As I was hanging out the washing this morning, the heron flew in and hovered over the top shed in the wind before landing, not at all bothered I was in the garden. The seagulls soon chased it away though. There was a lot of fishling activity this morning, I hope they're not eating the newly forming tadpoles. The freesias are looking lovely, I picked some for the kitchen. 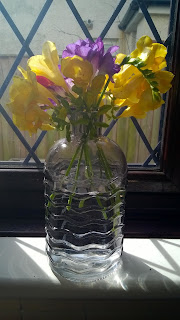 The second sowing of basil has come through, thankfully, I think I overwatered the first batch. I potted on the celeriac from the propagator, sowed more outdoor gherkins as the first sowing has disappeared as have the tomato 100. For some reason, some of the seeds in the propagator had fallen through the soil and were trying to grow on the mat. I've now emptied the propagator and potted up the stray seedlings, hopefully they will grow but, at the moment, I have no idea what they are (you've heard that before). I put the rest of the small seedling pots in the greenhouse and have reclaimed back my kitchen. The greenhouse is filling up...love it: 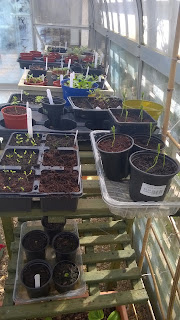 And look how the courgettes, pak choi and radish have come on: 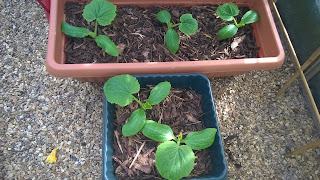 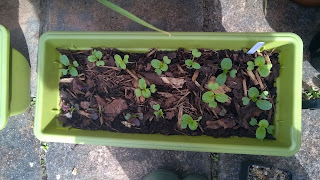 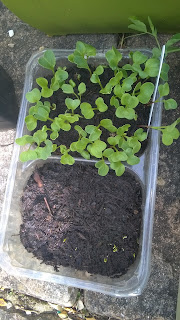 Next week I will have to start potting on and planting out. The acer and the olive are thriving in the greenhouse. The acer doesn't do well outside, I think the south west facing garden is too windy for it. 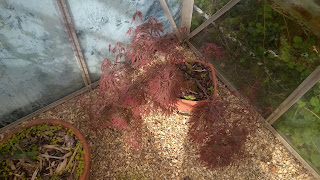 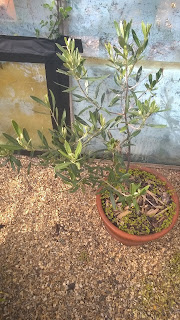 And...the apple seed that started to grow from seeds I planted last year has not only doubled in size but been joined by another one: 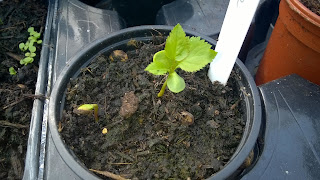 I've been watching The Masters from Augusta - I wish my lawn was as lush as the fairways there. I'm sure once him indoors is up and about again it will be!

According to Countryfile this evening, the weather for the coming week here in Dorset is a mixture of sunshine and showers, mild for the first half then becoming colder and drier, so looking good for getting the planting done. Wild and windy here at the moment. I hope the weather is kind to you this week, have a good one and catch up next Sunday.