Dorset Garden Diary - A Waiting Game and There Was This Huge Bee...

I can't believe it's Sunday again - where does the time go? It's been a pleasant Spring week here in Dorset, the weather has been balmy, in fact quite warm at times, which is great for the garden.

Monday - started cloudy but mild (53F 11C ) before blossoming into a sunny day reaching 70F 21C in the greenhouse at midday. I potted on half the pak choi seedlings and put the other half direct into the garden - we'll see which does best. The same with the radish seedlings. I did the second sowing of the chard and was going to the same with the broccoli but yet again the first sowings have died on me, I remember last year I didn't have much success with it so I think I'll give it a miss. I was pottering at the top of the garden, within a couple of feet of the seed feeder, and a blue tit flew over and started feeding, not at all bothered that I was there...they're beautiful close up. My next job was  covering the pea and runner bean pyramids in netting and securing the crossbar between the two. The potatoes are pushing up through the soil so I covered them with more soil. I moved the two potato bags that were in the greenhouse outside.

The mixed onions are now growing well so I decided to take off the cloche protector but still leave it over the carrot, beetroot and parsnip seeds. Whilst I was doing this a huge bumble bee was buzzing around the rosemary and campanula nearby. I went to get some tent pegs to secure the covering and when I came back I could hear persistent buzzing - the bumble bee had flown under the covering. Keeping my distance, I used a long bamboo cane to try and lift the plastic so it could escape but it chose to go further under. Then it discovered the holes in the plastic and tried to escape through one. It got stuck halfway, caught round it's middle. And it got angry. And I didn't know what to do. It was stuck fast. The phrase 'who ate all the pies' came to mind! This is just the front half of it and the holes are large enough to put a thick bamboo cane through. 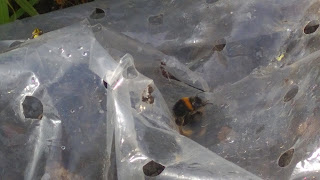 Obviously I didn't want to get too close in case it freed itself and stung me, so I tried to rip the plastic with the bamboo cane but that just made the bee even angrier. I fetched the long-handled shears and started cutting away at the plastic around it but I couldn't cut the hole where it was stuck because it was jammed in. By this time it was 'hell hath no fury like a bee stuck in a hole too small for it'. I decided there wasn't much else I could do so left it for ten minutes or so. When I came back the bee had stopped buzzing and was feebly trying to pull itself through. I tried again with the bamboo cane, pulling at the holes in the plastic. This time it worked and the bee managed to free itself and fly off. I read somewhere that bees can recognise human faces, I'm just hoping that, if this is true, it recognises me as it's saviour and not it's captor!

Tuesday - foggy early this morning and only 40F 4C but by 8am it was clear, sunny and warm. I fed the fish and the birds (they are still getting through two tube seed feeders a day) then I took the sweet pea, pea and flower seedlings out of the greenhouse into the garden to harden off. I still haven't solved the magpie on the bird table problem but they aren't going on there as frequently since I stopped putting bread and suet treats on it. Second sowings of radish, chard, rainbow beetroot and little gem lettuce complete. Up to 72F 22C in the greenhouse today. I picked some daffodils for the house as they are so pretty and we have quite a few different varieties that have appeared this year. 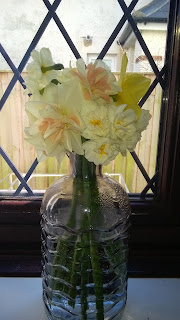 One variety (white outer petals and pale apricot inner) has a heady perfume; after I'd put them in the vase my neck started to itch, then burn. I put lavender oil on it and after a few minutes it calmed, I think it must have been a reaction to the perfumed daffodil.

Wednesday - the day started grey and misty again, slightly warmer than yesterday at 43F 6C. Usual feeding routine and putting the pots outside to harden off. It was then I noticed the clematis over the arch - it's all in bud and some flowers have opened: 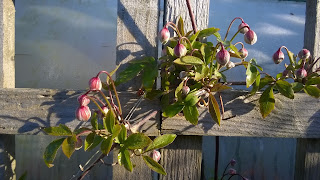 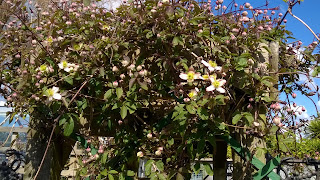 and the plum tree has burst into life. 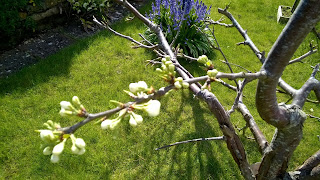 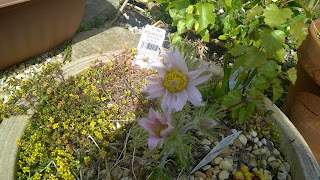 and this plant - I think it's a veronica - has seeded itself in the gravel, very pretty: 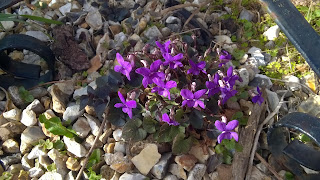 and this is an inside view of the fritillaria snakes head 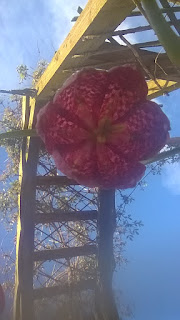 The potatoes have already pushed through the soil I put over on Monday so I covered them again. I think this is what went wrong last year, the spuds grew but I didn't cover them in enough soil. I'm on top of it now (no pun intended). The fish are enjoying the balmy weather...the adults spending their days lazily drifting near the surface whilst the teenage fishlings are splashing and darting around, the water constantly rippling with their activity. One thing I've noticed, the fish don't like the pond pump  on. We have a small fountain and a trickle waterfall which we use to keep the water oxygenated. It's on regularly in the summer but only now and again this time of year. As soon as I switch it on the fish dive to the bottom of the pond. As soon as I switch it off they surface again!

Friday - yesterday was another gloriously warm spring day but unfortunately, I was unable to make the most of it. Today started with heavy rain (although much warmer 50F 10C) which lasted until mid afternoon and much needed by the garden. I went out late afternoon and couldn't believe it, the potatoes had grown through the soil I covered them with yesterday! I checked the greenhouse and fed the tomato seedlings. Later in the day the sparrows and blue tits were having a feeding frenzy. I have nearly run out of bird seed. Watched Gardeners' World this evening and jobs for the weekend are prune back gooseberries and redcurrants but not blackcurrants.

Saturday - cold but sunny spells (42F 5C) and a bit of a chilly east wind. The blue tit parents were in and out of their nesting box all morning, the sparrows were feeding most of the day and the pigeons waddled around looking for scraps. I've now run out of bird food.

Sunday - a cold start (38F 3C) and sunny. We narrowly missed a frost although I did cover some of the tender plants late yesterday just in case. I went shopping first thing for more bird seed and a couple of pots and received this cape marigold/rain daisy free: 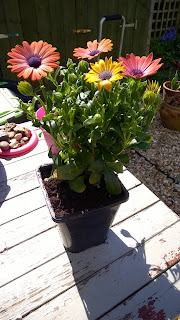 I've decided I need a bigger pottering shed, I'll just add it to him indoors' to-do list! I sowed runner beans and re-potted the gherkins, ragged robin, mixed verbena and quaking grass. I made holes in the new pots ready for the chillies and peppers and I assembled the plant halos (watering system) over the grow bags ready for the tomato plants. 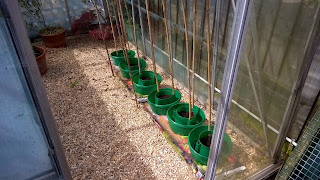 Amazingly, the potatoes have grown another inch or so since yesterday. In the greenhouse the courgettes have nearly doubled in size since last week 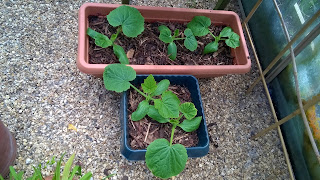 the tomatoes and cucumbers are coming on 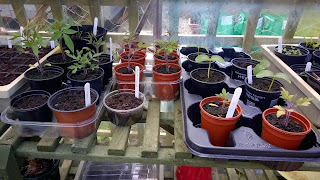 and so are the peppers, chillies and gherkins 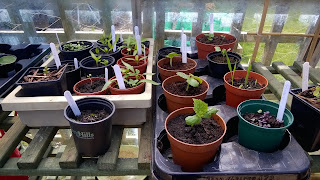 and outside hardening off are the peas, sweet peas, radish, beetroot, leeks, spring onions and flower seedlings. 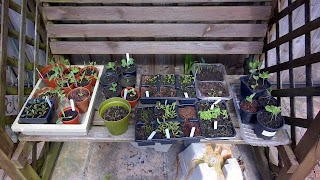 One of the azaleas has come into flower 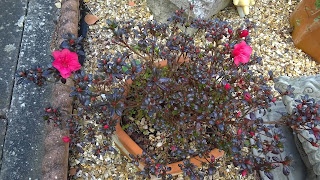 the lionheart lilies are growing again 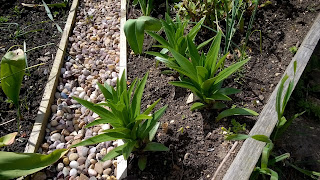 ﻿
the quince tree is in bud (planted last year) 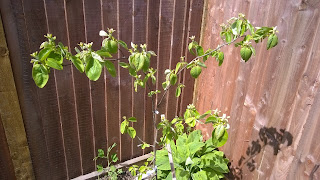 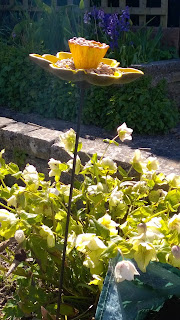 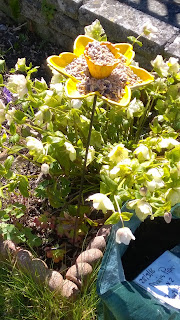 and this is a general view of garden 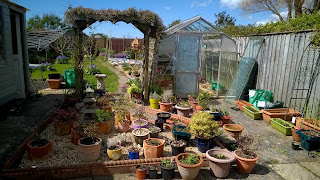 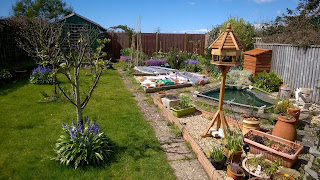 It's a bit of a waiting game at the moment. There are plants ready to be planted out but there is still  the possibility of frost. This week the weather is dry and fairly mild up until Thursday, then the rain comes in, then there's a cold front coming for next weekend bringing frosts. Looks like the greenhouse is going to be crowded for another week at least. But there's still plenty to be getting on with, I haven't even touched the front garden yet.
Have a good week, hope the weather is gardening-friendly wherever you are and catch up next Sunday.
Regards,
DD
Follow me on Twitter @daisydigga.blogspot.co.uk
﻿
﻿
﻿
﻿
Posted by Daisy Digga at 09:52