Dorset Garden Diary - Garden Under Attack and a Plethora of Cucumbers

The week started off with plenty of rain. Proper rain, not the drizzly stuff, and gradually cleared as the week went on. Both the veg and flowers have put on a spurt and the garden is looking full.

Monday - the day started at 14C 58Fand with driving rain, finally clearing late afternoon which didn't leave much time for gardening but the garden definitely needed it. The fish are still eager feeders, it's like having a pond of piranhas! I picked the first lettuce for my salad - it actually taste of lettuce not the tasteless leaves you buy from the supermarket.

Tuesday (summer solstice) - 14C 58F again and sunny but still only reached a high of 17C 62F. I need to spend some serious time tidying the garden after all the rain we've been having but a) there's not enough hours in the day and b) see below.

Wednesday - a bit warmer today at 16C 60F and thick fog. It lifted mid morning but then came back again early evening. Very humid. Didn't have that much time for gardening today but I did pull out all the bindweed (or most of it) in the front garden, it had wrapped itself around the flowers especially the irises and the white daisies. I nearly filled a dustbin bag. There are snails clinging to most of the flowers and shrubs and every time I disturbed the soil an army of ants surface and run around trying to regroup. It's the same in the back garden. I've never known this many snails and ants, they're everywhere - must be a result of the warm wet winter.

And they aren't the only pests. A couple of weeks ago I was watering the garden and saw movement out the corner of my eye. When I looked I thought, at first, it was blackbirds on the lawn then when I looked closer (I didn't have my glasses on) I saw they were baby rats...aaarrgghhh!!
They were only tiny but still... I turned the hose on them and they ran into the undergrowth. I then wondered how long they had been in the garden. The thought of having come across them when I was weeding doesn't bear thinking about and now I'm reluctant to do the weeding until I know they've gone (hence the overgrown jungle). I came back in and changed out of my flip flops into thick boots and went back out to remove the bird feeder, much to the sparrows' disgust, but then it's their own fault - they should eat the seed, not throw it everywhere! The day before I had been sat by the pond and there had been a rustling and scurrying noise behind me in the bushes and I caught a fleeting glimpse of something but didn't realise it was a rat. Anyway, I rang the Council pest control and the earliest they could send someone out was today. Because I'd removed their food source I haven't seen them for over a week. The officer said they are still around but it's not an infestation. Their nest is in him indoors' top shed so when the traps are removed so will the shed be - it's dilapidated and falling down anyway. The man comes back in two weeks. Pleasant man, strange career.

Last job of the day was to remove the netting cage over the veg patch. I went into the greenhouse to check on the tomatoes and cucumbers and guess what? Not only are there cucumbers ready for picking (beth alpha and passandra mini) but I counted in excess of 30 more growing!! Had one with my salad - delicious. 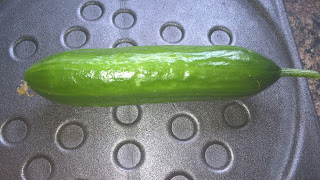 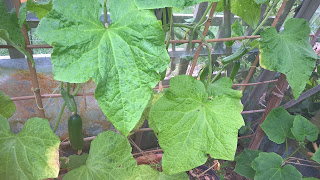 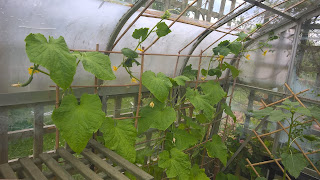 I also have the first gherkin. Only one so I'll start the pickling process and add the others as they grow 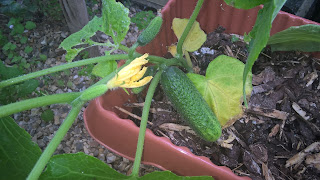 Thursday - 15C 59F this morning (a centigrade warmer, makes all the difference), cloudy and humid and reaching a maximum of 20C 68F. I fed the fish first thing and the water was frothing with them feeding. There has to be at least a couple of dozen and last year's fishlings have now turned orange, it's great. Later this afternoon I started tidying up the pots and around the side of the shed. It doesn't look like I've done much and no-one else sees them but I know they're there!

Friday - 14C 58Fcloudy and humid but then the sun came up and the wind got up. There are tiny flowers on the peppers and chillies but too small to photograph at the moment. I planted one of the salvia hot lips cuttings in the cottage garden, removed the big daisy plant as it was taking over and replaced it with a cutting from last year, planted out aquilegia chocolate soldier seedlings and moved a plant as the dahlia was starting to overpower it. I then planted out the rest of the parsnip and spring onions seedlings. In the last couple of days the leaves on the rosebush have started to turn brown, 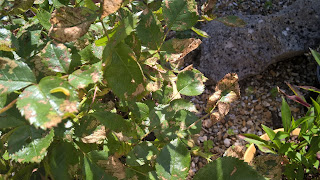 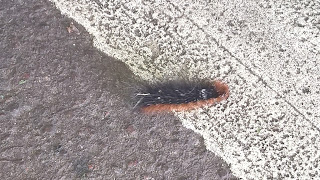 Saturday - again 14C 58F - I might as well cut and paste this every day. I was woken at 5.45am by the seagulls causing a commotion and thought 'I recognise that noise', went to the window and after a  scan of next door's garden there it was...the heron! It was well camouflaged (can you see it?) 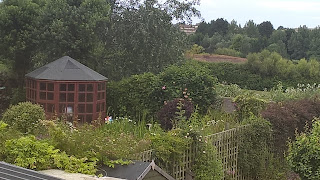 and wasn't bothered that the seagulls were dive bombing it. It stayed there for over half an hour and caught at least one fish. I'm definitely keeping the netting securely over our pond! I didn't get out in the garden today apart from feeding the fish. I noticed in the pottering shed that Roger the spider who took up residence on my hand towel has passed away and has been superseded by Roger 2 who is bigger, menacing and has attitude - reminds me of the Terminator! Apart from leaving the clover on the lawn for the bees, he's the other reason I'm not mowing the grass as he sits above the electric socket!

Sunday - 14C 58F...boring I know. The day of high cloud and warm spells didn't materialise and we had low cloud and drizzle. I fed the fish his morning and it appears we have an albino - it's silver! It's either a throwback from generations past or the heron dropped it when flying over - I'll go for throwback.

The lionheart lilies are not far off flowering 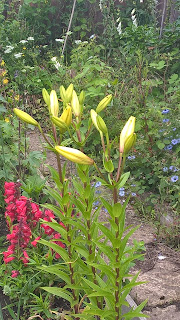 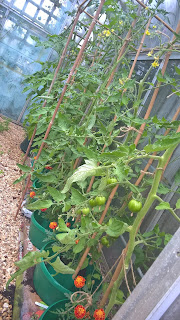 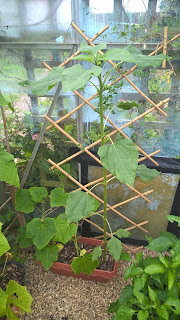 The outdoor tomatoes, gherkins and squash are doing well 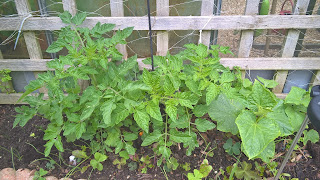 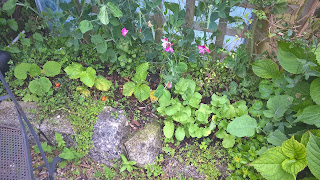 the sweet peas are adding colour to the pond area 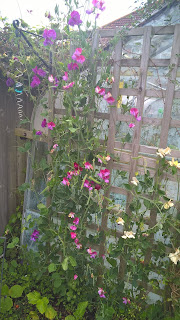 and...since I removed the netting from over the veg bed something (pigeons - you will be nameless!!!!) has eaten all the kale leaves which is not good but, I'd rather the kale than something I really like 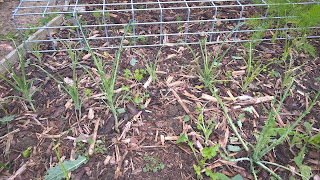 One last thing - since we moved in nearly three years ago the apple tree has failed to deliver not only in apples but foliage, so last autumn I gave it a number one prune and said this was it's last chance otherwise out it went. Well, look at it...there may not be any fruit on it (not surprising after the harsh prune) but it's blossoming with leaves and looking very healthy (note the intentional clover in the background!). 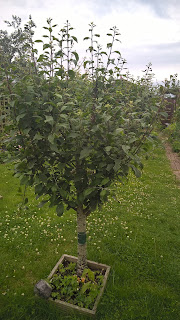 There was no Gardeners' World on Friday because of rugby this time but the BBC did manage to fit Countryfile in today in between the football - thank you, I'm so grateful. So...the weather for the week ahead is the same as the weather for the week ahead for the last three or four weeks minus the thunderstorms, which amounts to sunshine and showers and no great surge in temperature. We now need the sun to ripen the fruit and bring on the veg. Hope the forecast is better where you are, catch up next Sunday.