Dorset Garden Diary - Did I Miss Summer? No...Hang on...Maybe Not

I hope you've had a good week. There's been plenty to do here to keep me out of mischief. I'm not going to bother with the temperatures this week as the mornings have been either 13C 55F or 14C 57F and it hasn't warmed up beyond 18C 64F - is this summer??

Monday - the week started sunny for a change. I've noticed that the pottering shed roof is leaking quite a bit now so that'll be a job on 'him indoor's list'...I might even get a new one out of it if I play my cards right. I trimmed off all the brown leaves on the rose. The RHS tweeted back to say the culprit is sawfly so I'll have to get a deterrent. I took cuttings from the borage, fuchsia, and hot lips salvia, planted out more of the aquilegia seedlings and sowed more cucumbers, carrots, spring onions, fennel and radishes and tidied the greenhouse.

Tuesday - sunny this morning, rain this afternoon and windy all day. I fed the greenhouse cucumbers, 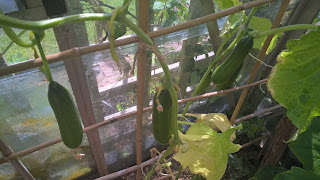 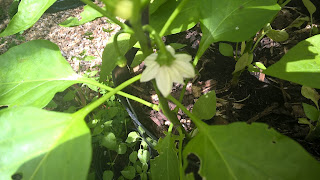 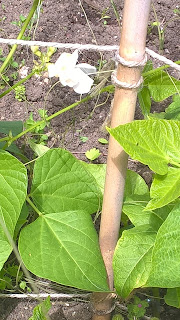 I pickled a few gherkins that were ready and picked a couple of cucumbers, did some weeding, replanted violas then gave in and mowed the lawn avoiding Roger 2 by using a socket in him indoor's workshop. 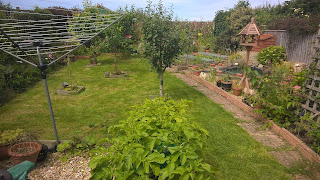 It was a shame to cut the clover but the garden was beginning to look tatty. Next year I'll look at having a small wildlife patch. I put down ant killer by one of the grow bags in the greenhouse as it's riddled with them.

Wednesday - the weather was atrocious this morning with driving rain, more like autumn than  summer so not much accomplished apart from feeding the fish and turning the compost tumblers.

Thursday - and another cloudy day. I watered the greenhouse and put more ant powder down, removed the outer leaves on the celeriac to promote better growth and sowed more beetroot, fennel, lettuce and spring onions. I removed the side netting from the pond to let any frogs in and out (thankfully no further signs of the rats) and cleared out some of the excess weed 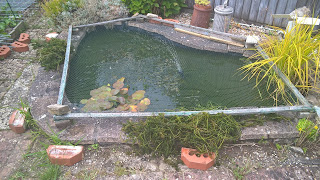 The fish weren't impressd with that so while they were sulking I put the pump on for a couple of hours...they don't like that either but it keeps the pond oxygenated and them alive.

Friday - cloudy and very windy with a few sunny spells. We need some decent sunshine to ripen the fruit and veg - there are lots of pods on the peas but nothing in them yet. I went out early to feed the fish, a I neared the pond I heard a scuffling noise and thought oh no (polite version), the rats are back. But it was a squirrel that I can only presume was rooting through the drying pond weed. It scooted to the top of the fence, stopped, cheekily turned round to give me a 'look' before disappearing over the other side. It was a big squirrel, I haven't seen one that size before. Made me jump, I'll tell you. I tidied up underneath the cherry tree - before 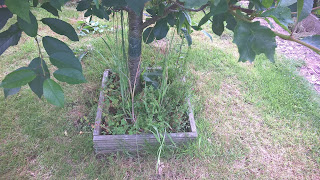 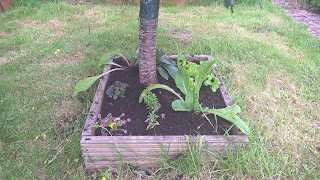 As you can see the grass needs a bit of attention...it's on his list.

I repotted the blackcurrant cutting 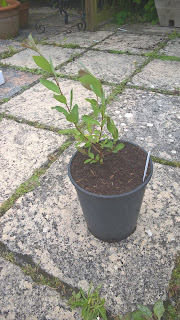 and generally tidied up. I'm not sure about the potatoes. Only one batch has flowered yet they are all yellowing. I've had a feel of the bags and I think, I hope, there are crops in there. What hasn't been a success this year is the chop suey greens, pak choi and kale. The Chinese leaves are doing well but I'm not sure what to do with them 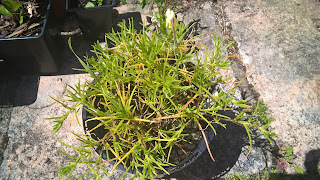 Saturday - started sunny and windy, clouded over, rained this afternoon then sunny again...summer meets autumn meets April showers! I bought sawfly deterrent but couldn't apply it as too windy. We need more solar lights but couldn't find the right ones. I finally made a start on the overgrown back beds 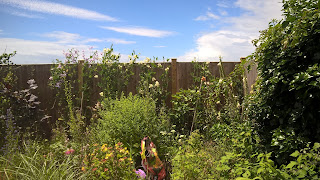 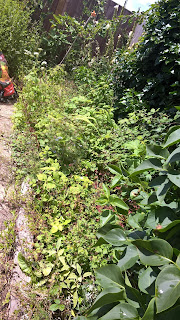 it's going to be a long job. I picked some sweet peas as they were being damaged by the wind 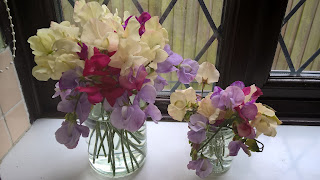 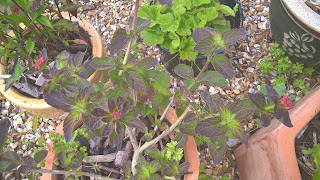 the aloe vera is in flower 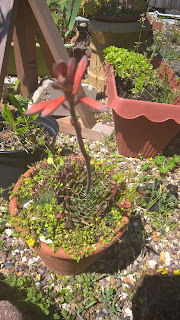 so is the thyme and golden sedum 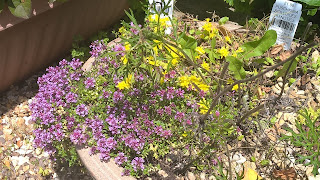 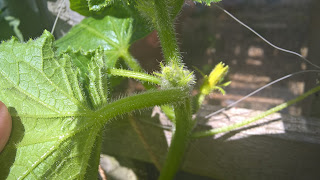 Sunday - dull, dismal and cold all morning but the sun did eventually come out and, dare I say it, it felt like summer...honestly! I moved the gherkin that's not a gherkin from the greenhouse into a flower bed, still don't know yet what it is, 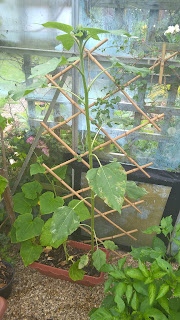 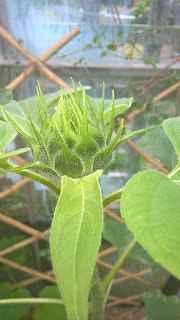 The cottage garden is filling out 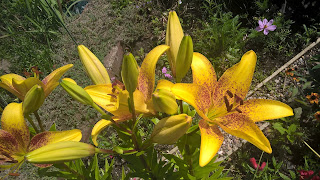 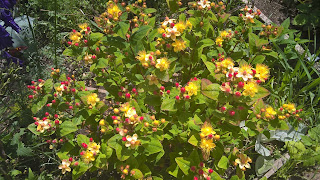 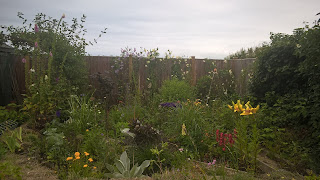 I completed an online survey for the RHS re pollinators and pollinating plants, I was pleased to see I have many of those plants listed in the garden. Finally got round to watching Friday's Gardeners' World, jobs for the weekend were feed the rose (tick) and divide the irises - next week. And finally, this is growing in the rockery section, I obviously planted it but I've not seen it before. 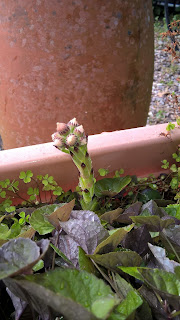 Well, that's it for this week, other commitments are calling so I'll have to watch the weather forecast tomorrow. Hopefully next week I can say 'I didn't miss summer, it's here'!! Have a good gardening week and catch up next Sunday.