I hope you've had a good week. It's been a bit of a mixed bag with the weather, almost a heatwave and almost autumnal at times. There's been plenty happening in the garden but it's all mainly picking crops, cooking, freezing, bottling and pickling.

Monday - 17C 63F, gorgeous sunrise and sunny all day. I had intended to tidy the front garden but it didn't happen as I was working most of the day, but I did pick tomatoes, runner beans, cucumbers, gherkins, carrots, spring onions, fennel, swiss chard and blackberries. I froze the latter along with the plums that had ripened in the greenhouse, pickled the gherkins (jar no.4 started). Had the salad for lunch and the veg for dinner. I watered the flower pots and the veg.

Tuesday - a much cooler 14C 58F but developed into a hot and windy day. I was working all day so didn't get chance to get in the garden until the evening. I picked more cucumbers and tomatoes and fed the greenhouse plants and the garden tomatoes, gherkins and squash. The chillies are ready for picking later in the week. The pottering shed is still tidy (surprisingly) 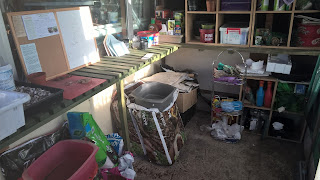 but outside is a jumbled mess which I keep meaning to sort out. The 'for your eyes only' rose is in flower and looking good 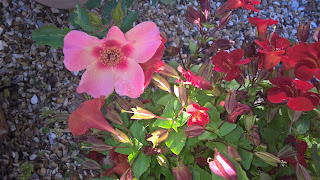 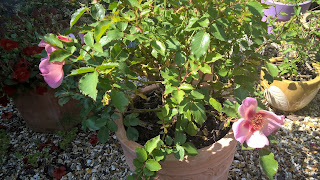 Wednesday - another sunny day up to 21C 70F but felt hotter. Strong winds forecast for the next few days so the priority job today was to tidy the side of the pottering shed and secure everything. I stacked the bags of garden rubbish for him indoors to take to the recycling centre; put the soil from the potatoes into two of the large bags and a large container (I will dig this into the garden eventually!); sorted out all the flowers pots, threw some out and cleaned others. It's looking much better 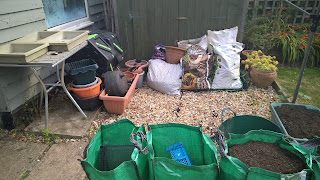 I switched on the pond pump for a couple of hours to oxygenate the pond, the water is looking clear and the fish are happy and eating well. The garden was full of butterflies this afternoon, mainly red admirals and cabbage whites. Picked more plums to ripen in the greenhouse as they are still going mushy on the tree. The pears are coming on but not ready for picking yet. Picked more runner beans, cucumbers, tomatoes, gherkins and carrots - took the cucumbers and tomatoes round to the neighbours. 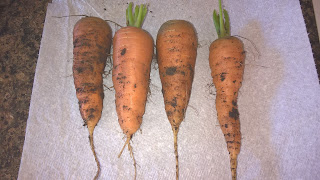 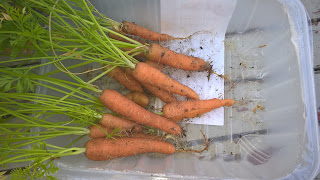 The carrots are Amsterdam 2 amice grown in a pot 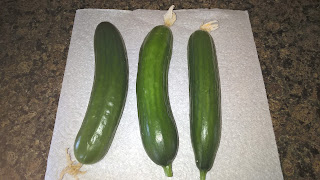 The cucumbers are beth alpha 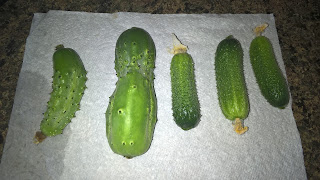 and one giant gherkin

Thursday - started at 15C 59F and developed into a hazy, autumnal-feeling day and humid. I went out the back to pick blackberries. It is becoming overgrown under foot so I put on my blackberry-picking clothes...where's the fashion police when you need them! 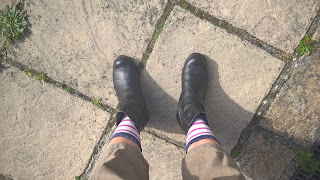 I picked just under a pound and froze them. More plums have ripened so they were frozen as well. The fish were very busy in the pond this morning (errmmm..where else would they be??). They obviously had their own agenda, darting about. I was mooching about thinking there's not much to do when I noticed that some of the leek leaves had garlic rust (a fungal infection). I removed the offending leaves but, as it's so windy, the spores had probably been transferred to the rest of the crop so I chose to pull them all up before I lost them. They are still small, unfortunately. 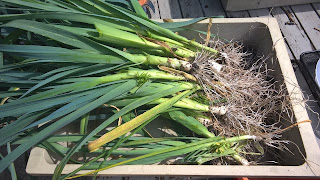 I blanched and froze them. I would like to have seen this one fully grown - wonder if it would have kept twisting 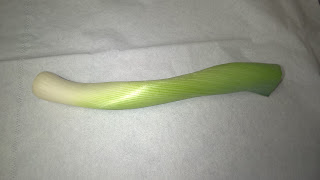 Friday - same temperature as yesterday, cloudy and drizzly then some proper rain. Humid again. I was working all day but I did pick the chillies and more tomatoes and cucumbers. So far the tally is:
tomatoes - 5.5lb, cucumbers - 17, gherkins - 4 jars, runner beans - 1lb and blackberries 1.5lb.

Saturday - 16C 61F and extremely windy. Sunny with intermittent heavy showers. I tidied up the leaves on the outdoor and indoor tomatoes 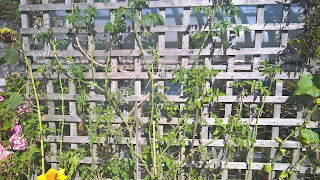 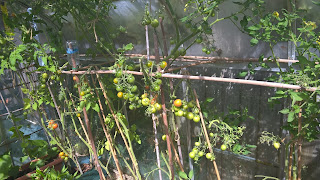 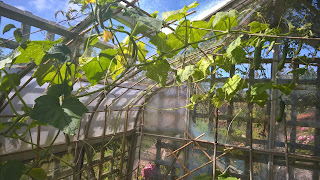 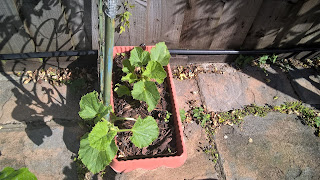 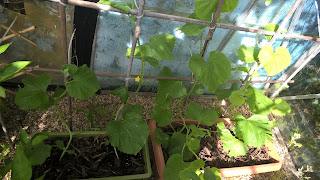 The next batch of lettuces are coming on 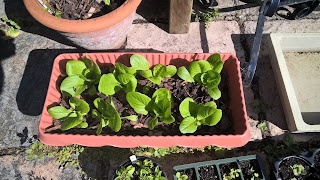 and the chilli and mini pepper plants are thriving 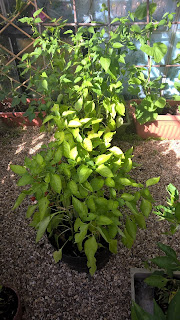 And talking of chillies, these are the ones that were ready for picking 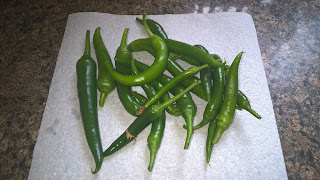 and this is how they ended up - chilli oil 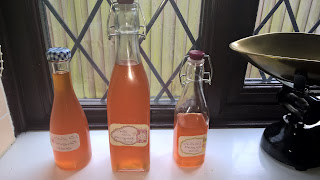 Sunday - 16C 61F sunny but still very windy. Him indoors out early working on his list. Next week I am away so he will be in charge!! He has two lists - his and the one I will be giving him later. He's under strict instructions to take before and after pics, when to water the pots, the veg, the greenhouse etc etc etc.

Well, I have run out of time this week, just not enough hours in the days. Watched Countryfile and it looks like a good week for him indoors to be out in the garden although thunderstorms coming in late Wednesday/Thursday. I didn't get round to watching this week's Gardeners' World so the jobs for this weekend will have to wait until next weekend.

But, before I go, here's a couple pics of the cottage garden - the colours and textures are blending wonderfully 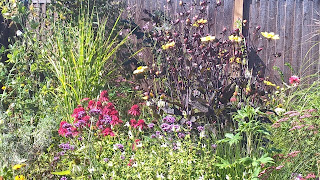 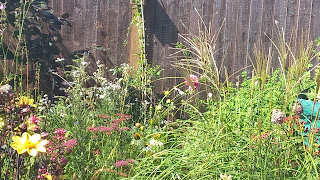 and a meditating carrot 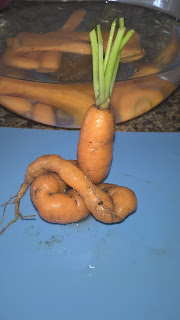 Well, that's it for this week, you can find out how him indoors got on next Sunday.
Regards,
DD
Follow me on Twitter @DaisyDigga﻿
Posted by Daisy Digga at 19:29