I hope you've all had a good week. A chilly start here but it's ended gloriously and I've been reaping the benefits of all my hard work.

Monday - 16C 60F and partly sunny to start only rising to 19C 66F which is not good for august. It's also very windy again. First thing, I watered the greenhouse and fed the fish - the fishlings are growing rapidly. While I was in the greenhouse I heard the geese fly over, that's the first time I've heard them this year. I planted out the next batch of little gem lettuce then spent ages trimming off the excess leaves on the tomatoes in the greenhouse and in the garden 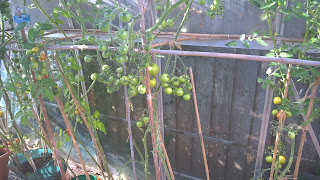 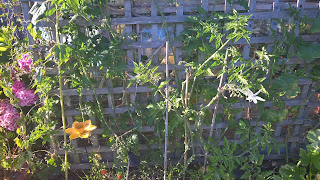 Watered the cottage garden this evening as it's looking a bit tired.

Tuesday - a chilly 13C 55F but a stunning sunrise. The forecast was for hot sunshine all day but by mid afternoon the clouds appeared and it was quite chilly in the shade. Jobs to be done are - finish clearing the path of grass that has taken hold and clear the beds on the right-hand side of the garden 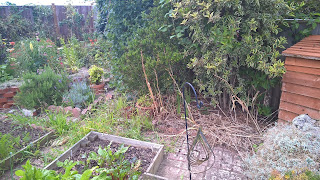 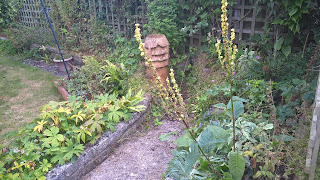 I decided to tackle the above which took nearly two hours to dig out the plants that had taken over. I've left some which I will shift around at a later date but it looks much better. I also emptied the small cauldron pond as, unfortunately, it has been neglected (slap hand) but I have plans for it. Something had died in it and a small part that was left rose to the surface...gross! But there's no point in filling it again until we have rain forecast which isn't this week. I'm going to put bee and butterfly attracting plants in the lower bed and shrubs in the upper. Looks much better already 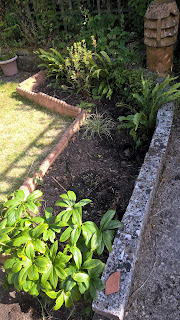 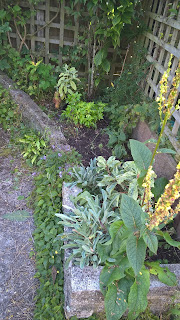 I pruned the cherry tree (after reading up to make sure it was the right time, and it is) as I kept getting whacked on the head when I walked past. I'm quite pleased with my efforts 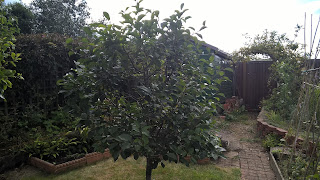 Picked more blackberries, two large gherkins and more runner beans - they are stringless (Desiree) and so much nicer to prepare and eat 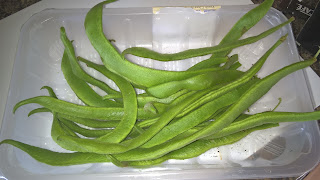 Last jobs of the day were feed the greenhouse plants and outside toms, cues and gherkins and give the fish their supper.

Wednesday - a slightly warmer 14C 57F and cloudy. Stayed chilly all day - fish were hungry today. I deadheaded the perennials and collected seeds from the geum, ladybird poppy, delphinium black knight, flax and the burgundy Echinacea. Gherkin jar no. 3 now full! Noticed these chillies in the greenhouse... 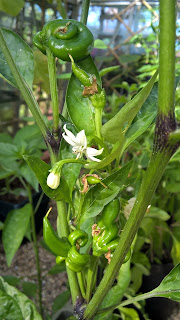 Thursday - 16C 60F and cloudy. I think I mentioned that as soon as the plums start to ripen they go off? So, I picked some today and put them on the mesh in the greenhouse - hopefully because it's hot and dry in there they will be eatable when they've ripened. Picked more blackberries and put them in the freezer for jam making. I watered the greenhouse, pots and veg garden. I've tied up the parsnip leaves as they are spreading across the bed, suffocating other veg trying to grow.

Friday - turned into a balmy 21C 70F. Unfortunately I was unable to enjoy it as I was working. I watched Gardeners' World this evening and jobs for the weekend were: collect seeds (done), pull out peas as they've now finished (sort of done, some are still growing). Picked up some interesting tips though - pots only need a good soak once or twice a week; keep celeriac moist so it won't bolt and harvest between October and December when the size of a tennis ball; to maximise fruit on the tomato plants remove all the leaves that are covering the fruit (already done) and the side shoots (already done): put leaves around the base of the plant, this will feed them potassium; to break down clay soil plant potatoes in it. Amazing sunset 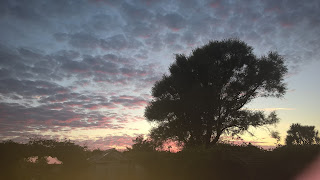 I stayed up to see if I could see any of the Perseid meteor shower. Although it's not totally dark here as we have some street lights, I did see a couple and the sky looked like it was studded with diamonds.

Saturday - 16C 60F started sunny then clouded over then started to drizzle after I'd watered the veg but it wasn't much, put together not enough to make one decent raindrop. I finally emptied the last bag of spuds (maris peer grown in peat free with added garden compost). The potatoes were bigger than the others but only 4lb yield 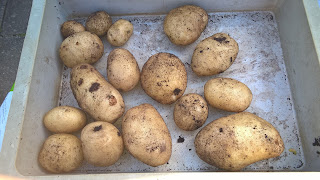 So, the best variety yield this year was the all rounder pentland javelin coming in at just over 14lb, with the maris peer at 13lb. 27lbs of potatoes from 12 seed potatoes...I'm happy with that! Whilst clearing away the dying peas I found more shallots. Some were big enough to keep, the others I'm going to dry and plant out next year to see if they'll grow. Picked gherkins, cucumber, tomatoes, runner beans, chard and beetroot. The beetroot isn't doing as well as last year but still, not bad 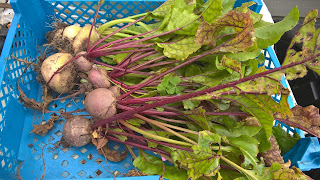 Sunday - 19C 66F start to the day - it's going to be a warm one. The squadrons of geese went over again, they're on a different flight path this year. I fed the fish. Not quite sure what ecological benefit pond snails have, but the fishlings spend their days playing with them. The sparrows are back in the garden and the 'for your eyes only' rose has recovered from the sawfly attack and is back in bud. 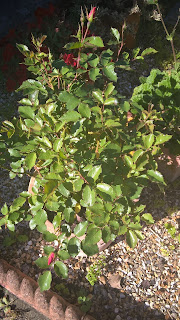 Also...how did I miss this yesterday! 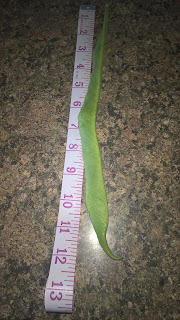 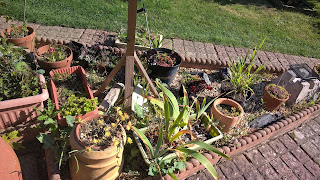 and the side of the pottering shed area which I want him indoors to help me clear... 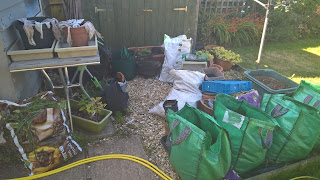 The carrots are proving an anomaly - straight 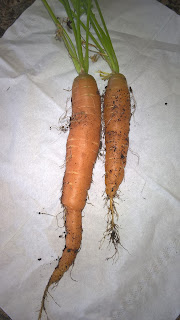 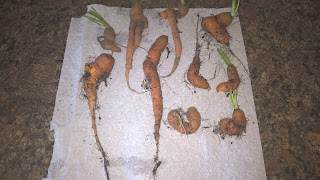 But...I do have a perfectly formed mini pepper 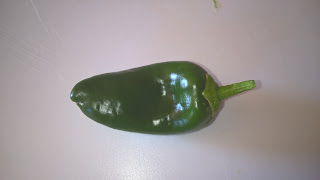 They are doing well along with the cucumbers and chillies 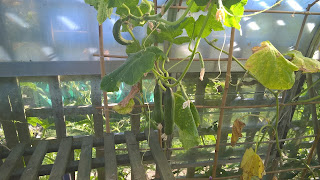 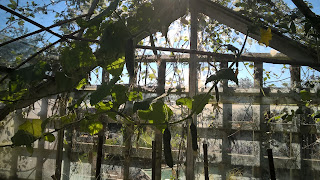 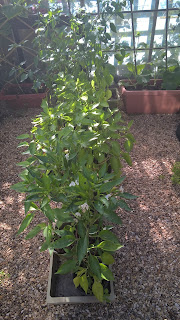 Watched Countryfile this evening and the heatwave is set to continue until the middle of next week then we may have rain but we need it now so I'm off to water the garden then have an ice cream. Have a great week, hope the weather stays good and catch up next week.