The rain at the beginning of the week has kick-started the plants and veg - just what they needed although it's been so windy everything has dried out again. I need to make a correction regarding the name of my blue poppy. The Meconopsis Group kindly tweeted me to say that it is actually Meconopsis Baileyi. Thank you for that.

Monday - well my rain dance did the trick, lashings of it and the garden is looking lush once again. Pulled back the conservatory blinds this morning and saw this 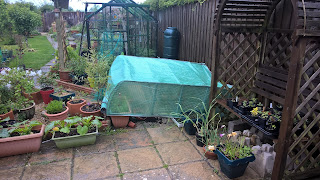 Not quite sure why it's toppled over as we've had far windier days. Maybe something landed on it. Anyway, it wasn't as bad as it looks, I only lost a few beetroot and parsnip seedlings. Yesterday I'd moved the bougainvillea and the mimosa out of the greenhouse to get a good soaking and it fell over them but, as luck would have it, they were inbetween the shelves so no damage. I righted it and put a couple of troughs on the bottom shelf. I then sowed more beetroot, parsnips plus cosmos tango. I've also sown more lemon seeds - I don't know what I'll do if they all take! 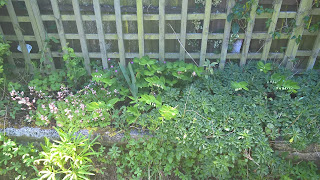 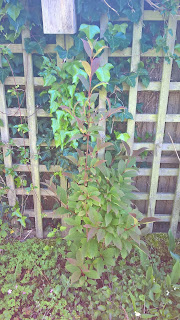 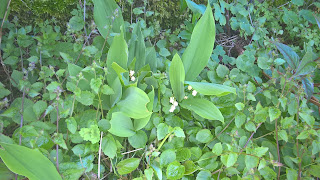 I forgot to mention, popped into one of the local coffee houses over the weekend and they were giving away big bags of used coffee grounds. They said I could have as many as I wanted but unfortunately I could only carry two, but I'll be going back for more for the garden

Tuesday - what a difference a day of rain makes. All the potatoes have grown at least 6 inches since the weekend so the first job today was to earth them up. 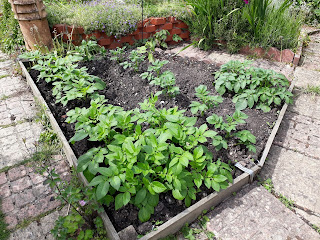 In fact, it was the only job that I did today - apart from feeding the fish - as it was drizzly.

Wednesday - I woke early this morning (just after 6) and it was eerily quiet. I looked out the window and there were no birds, there was no wind, no sound of cars. No noise, nothing moving. Just mist clinging to the hedgerows. I was busy all day so again all I did was feed the fish who are getting hungrier and hungrier each day. They sound like someone crunching biscuits when they eat the food!

Thursday - sunny today and windy. I fed the fish and checked the bird feeders. I'd left the seed trays out in the rain so they would get a good wash and I emptied the water from them into the watering cans. The garden is looking lush and the water butts are full. I'm happy again. The courgettes will be ready for eating soon 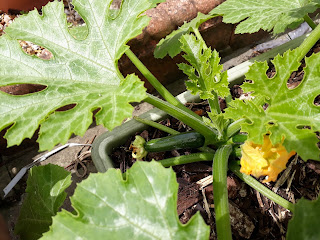 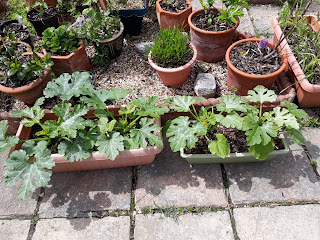 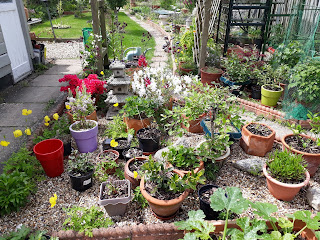 this is the silverbush I bought in the spring 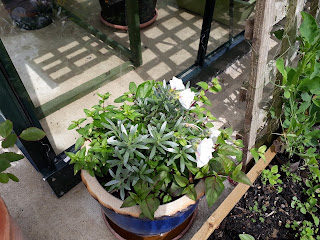 the sweet peas have shot up 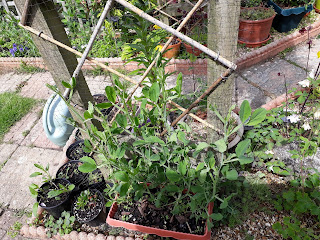 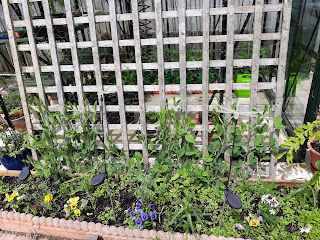 and so have the peas (pentland javelin spuds in the foreground) 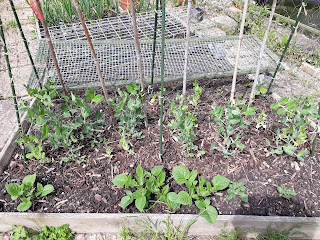 I picked radishes, spring onions, baby spinach and lettuce for my lunch and kale, swiss chard and baby spinach for my dinner. I planted out parsnip seedlings, pruned back the forsythia, cut off the suckers on the plum tree, pruned the ingrowing branches on the lemon tree and top dressed the pot. And talking of lemons, another seedling has appeared from the seeds I planted at the beginning of the year. I potted up three more cucumbers, trimmed back the clematis by the blue tits nesting box and chopped the tops off the weeds around the pond. I want to leave them there so the frogs have shelter when they leave the pond, although there's still no sign of the little ones.

Friday - sunny, warm and very windy. The sort of day you need a fleece, get too hot then when you take it off you feel chilled. I watched last week's Gardeners' World last night and one of the things mentioned was don't plant things too close, leave gaps so that the plants can grow into their shape. I dug out the white daisy in the cottage garden as it was stopping the grass from falling in its natural shape and one of the freebie plants I received. Now the grass has fallen into a lovely shape, just like a good haircut. I re-planted the freebie in another part of the cottage garden. I wanted to plant the white daisy in the back bed but I had to clear it first, the weeds are rampant. I cut back all the daffodil leaves as they are untidy. I know I shouldn't but the daffodils have been established long enough to grow well next year. I then weeded behind the quince tree. I found the clematis I planted last year that hadn't grown...it's now as high as the fence but no flowers yet. There is a bud on the orange rose and also a foxglove is growing. I planted the daisy behind the quince tree and still have the front of it to clear. There are flowers on the Duke of York spuds plus I earthed up the Charlotte's in the garden and in the bags.

Saturday - a humid day, mostly sunny with a short shower in the morning. I fed the fish and pottered for a while but didn't achieve much so decided to have a lazy day apart from sowing coriander, lemon basil, poppy 'black beauty' and ammi majus (bishop's flower) and fennel. And earthed up the King Edward spuds. Yesterday, when I re-planted the daisy, I noticed that some of the quince leaves had gone brown so I trimmed them off. I Watched Gardeners' World last night and Monty was talking about frost damage on leaves and I realised that's what it was. He also said don't cut them off. Oops! Another tip is to keep the blue poppy misted as they don't like drying out.

Sunday - sunny, warm and windy. My neighbours said the heron was about early this morning but the seagulls chased it away. Conflict of interest here as it's a lovely bird but I don't want it near our fish. I weeded between the carrots and spring onions, sprayed weedkiller on the weeds at the top of the garden near the quince tree, planted out the rest of the parsnip albion seedlings, verbena bonariensis and beetroot. It's all coming along nicely - both the 'for your eyes only' roses are in bud 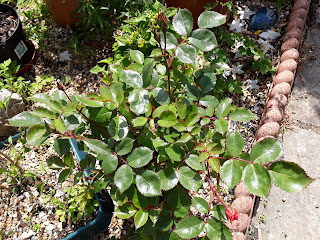 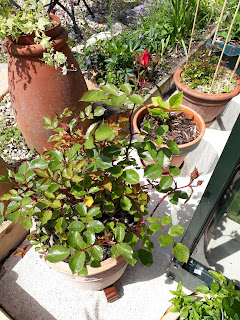 the first flower on the sweet peas 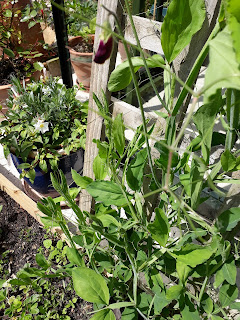 delicate grass in one of the chimney pots 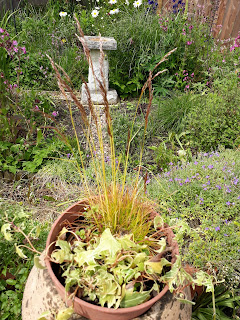 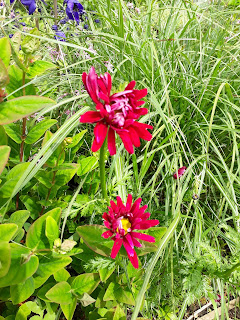 the shrubs are giving the garden plenty of colour 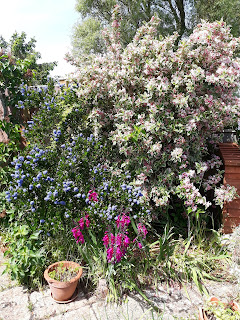 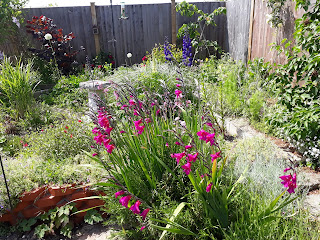 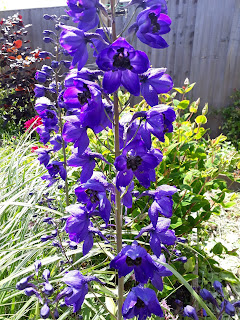 And finally these are the apple trees grown from seed last year. I thought they were the same variety but they are different so it will be interesting to see what varieties they are 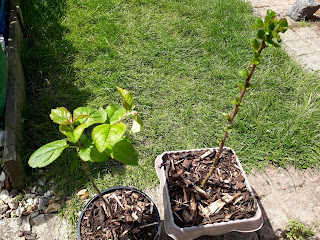 Well that's it for another week. Watched Countryfile and the weather for the week ahead is warm and dry so back to the water butts. Have a good week's gardening and catch up next weekend.
Regards,
DD
Follow me on Twitter @DaisyDigga
﻿
Posted by Daisy Digga at 20:09