It's been another mostly dry week with no sign of the significant rain forecast. All we had was a few spots of drizzle, so I've had to water the garden and the butts are running low again.

Monday - while we were out walking at the weekend we came across these leaves with red bits sticking out of them. At first we thought it was insects but it looks like they're actually growing out of the leaf 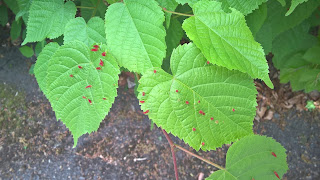 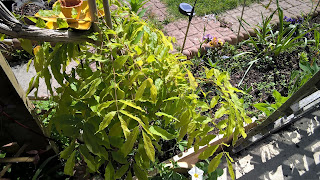 Apparently, so I've been told, there are some  older varieties that can take years to develop. Probably why it's never flowered and hasn't grown to more than a couple of feet so far, but the leaves are pretty. When I checked the garden and greenhouse this morning, one of the lemon seeds I planted a couple of months ago has sprouted 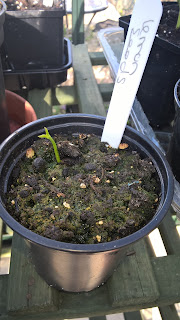 the white azalea buds have opened 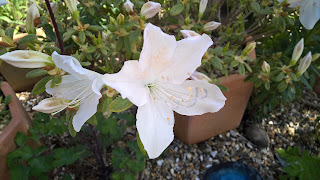 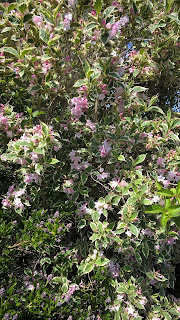 and we have the first flowers on the tomatoes 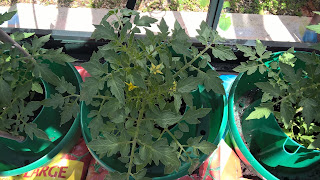 Tuesday - a sunny start then clouded over, then cleared again. I was having breakfast in the conservatory and noticed the absence of the blue tits, they must have fledged. Always sad when they leave. Later in the day a robin came into the pottering shed for a look round. All the spuds needed earthing up especially the Duke of Yorks and the Charlottes. It reached over 70F 21C in the greenhouse this afternoon. I sowed more carrots (chantenay red and large) and parsnips white gem as the original sowing hasn't taken, although the albion parsnips are doing well 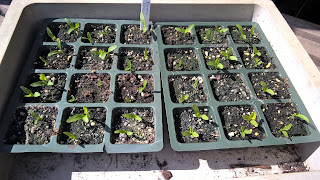 I re-potted the radish and rudbeckia seedlings. The fish were hungry today, not all of them have surfaced yet. I did some weeding and found four tomato plants growing in the new gravel bed by the pond and a couple in flower pots. It must've been windy the day I sowed them!

Wednesday - it was a chilly night. Sunny today but a chill wind. I covered the patio blackcurrant and bush raspberry with netting to stop the birds eating the fruit when it develops 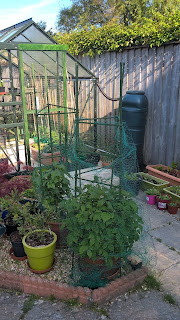 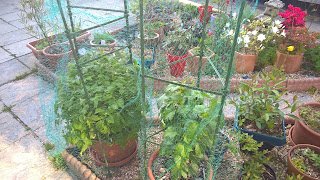 I brought some of the plants out of the greenhouse to harden off and planted out half of the cornflower seedlings plus echinacea, geum, lavender and all of the ladybird poppies, then watered them in. Also potted up the remaining two courgettes. Topped up the bird table - no magpies since our last adjustment (brilliant) - and fed the fish a few times. They are pouncing on it as soon as it hits the water. Him indoors moved the robin nest box to a lower position as we haven't had any success with it so far. He then tinkered with the netted frame we use for when the greenhouse door is open to stop birds flying in. He moved the sundial from beside the pond (as he keeps knocking the top off and has to stick it back on), put the pond pump back in and carefully pulled out half of the aerating weed as it was taking over. It looks much better 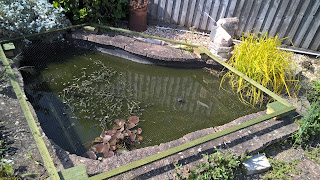 The hazelnut tree looked stunning with the sun shining on the leaves (the pic doesn't do it justice, unfortunately). 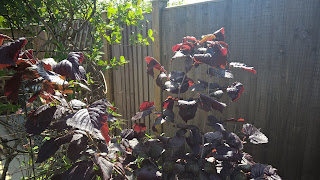 Thursday - warm and sunny then became cloudy and humid. Rain was forecast overnight but it didn't happen so him indoors mowed the lawn this morning. One of the blue tits came back to the nesting box a couple of times this morning. It didn't go in, just peered into it. We have the first flowers on the courgettes 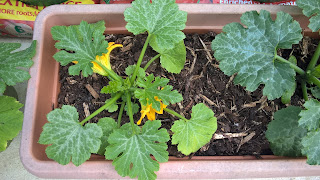 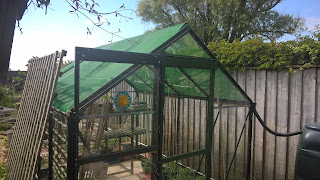 The fish were hungry again today, I fed them five times and it was gone in seconds. Still no sign of any baby frogs. I planted out the first of the beetroot seedlings, planted one of the Hestia runner bean plants in the garden and the others in containers 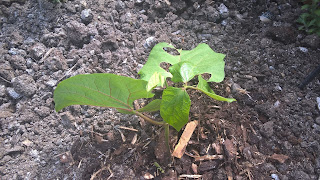 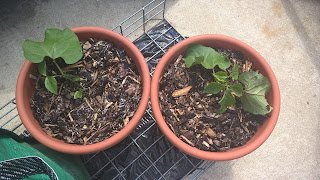 then I earthed up all the spuds as they've grown a good 4-5 inches since Monday. It's surprising how long it all takes...unless I'm getting slower!

Friday - more rain forecast but all we had was a few spots here and there. Cloudy today. I was busy most of the day but did give the garden a good soaking just in case the promised rain overnight didn't materialise. One of the meconopsis (Himalayan blue poppy) is in flower 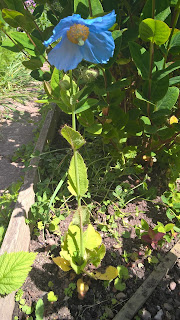 Saturday - the ground was slightly damp this morning, but I'm still glad I watered yesterday. I tackled the cottage garden today as it's become overgrown with the ground cover I planted late last year - it's run riot and suffocating everything. It took me a couple of hours. 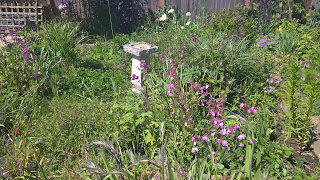 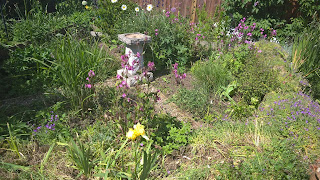 I then cut back all the daffodil leaves and generally tidied up, cleaned out the cauldron pond and planted out more of the geums, Echinacea and lavender. And I found this miniature antirrhinum growing on the patio, it's about two inches high 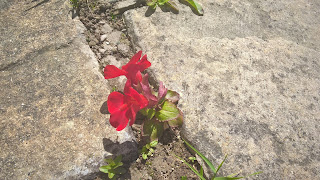 I also found another three tomato plants growing in the gravel bed!

Sunday - a sunny start but unfortunately, it's a no gardening day for me, but I did pinch out the tomatoes, water the greenhouse and feed the fish. And...I have figured out the mystery of the tomato seedlings. The gravel for the new bed and top of the pots came from the greenhouse, and I grow the tomatoes in the greenhouse. Even though it had been cleaned and sieved, seeds or roots from last year still sprouted. Isn't nature amazing!

I'll have to leave it there. The weather for the week ahead looks changeable and we could be having rain...but don't hold your breath! Have a good week and catch up next Sunday.