Well, the week before last was an absolute scorcher. Unfortunately, two of the fish died even though I had the pond pump on from early morning until late at night and I topped up the water three times. Apart from one of the larger fish, none of the others surfaced for most of the week. When it cooled on the Thursday a few came up briefly for food. We've had a visit from the heron some mornings and I think it might have scared them (even though it can't get to them) as they weren't staying on the surface to feed, more of a grab and dive.

I thought the blue tits had fledged but then the adults were back in and out of the box again. The  summer solstice was a gorgeous sunny day with a welcome breeze and an amazing sunset. I pottered throughout the week, sowing seeds and planting out seedlings including more beetroot. Fingers crossed the slugs and snails won't get these. Thursday morning dawned foggy but the wind soon cleared it and it was much cooler thankfully. Thunderstorms were forecast but they didn't materialise. I tied back the tomatoes and cucumbers, picked peas, courgettes and raspberries and some of the onions were ready for lifting 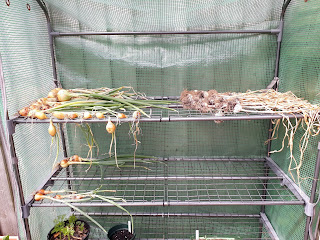 But mainly it's been a week of watering and dousing the greenhouse plants.

On the Friday, him indoors adjusted the pond pump so water isn't spraying out of the pond, weeded part of the front drive, pruned and re-shaped the conifer out the front 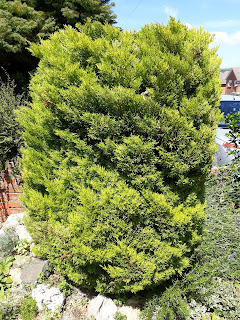 and put my new working table, that he made, in situ 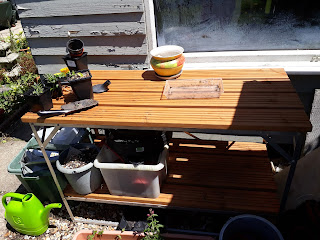 ...thank you! He also adjusted one side of the tumbler composter as I couldn't get it open. I planted up the next batch of courgette seedlings and noticed the French beans have started growing 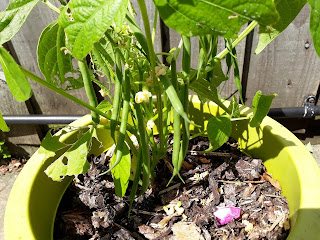 This Week
Monday - the first thing I did when we arrived back was check the pond, the water level was low but thankfully no dead fish. I picked French beans, peas and raspberries (the latter we had with chocolate parfait ice cream...yummy) 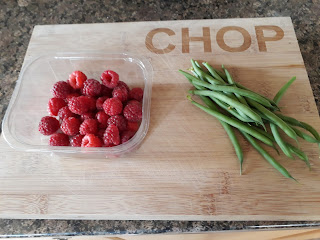 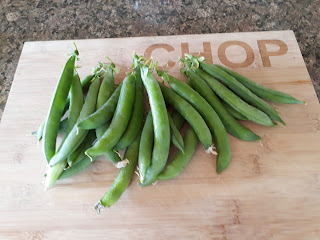 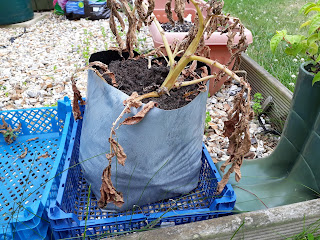 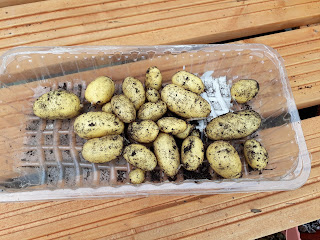 There was only about 1lb, not as much as last year when I grew them in larger bags. The peppers have grown bigger 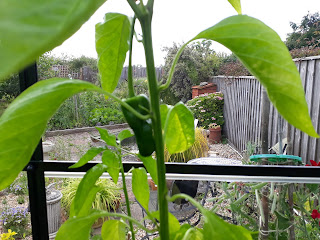 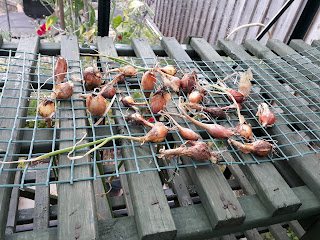 The blue tit chicks were vocal this afternoon. I picked more sweet peas for indoors, this year's flowers are stunning 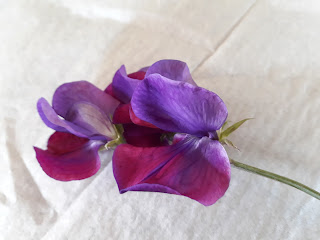 Tuesday - humid and raining so nothing done in the garden today.

Wednesday - dull and damp. Yesterday's rain has topped up the pond but it's still low. Picked more peas, beans and more onions to dry out. Cut the tops off the tomatoes (after four flower trusses), planted out a flower I found on my way home from a walk 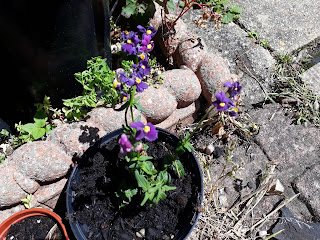 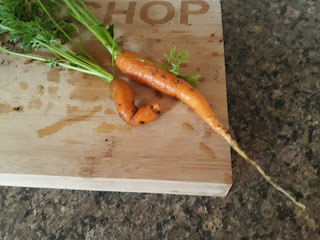 at least one of them is carrot shaped! 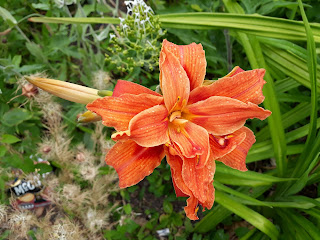 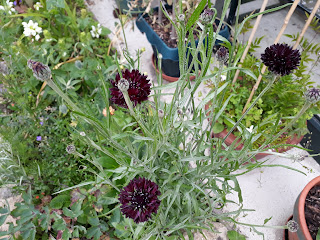 and I'm pleased with the black cornflowers I've grown from seed.

Thursday - humid and raining again. The blue tit adults were in and out of the nesting box regularly all day.

Friday - cloudy, damp with a bit of sun now and again. Hard to believe the difference from last week's heatwave - it's official, temperature above 30C 86F for four consecutive days apparently. The highest temperature was 35C 95F which unusual for the UK.

Saturday - a bit warmer and dry. I fed the fish, they are getting back to their normal selves - they've been acting strange lately, not surfacing and still snatching at the food instead of feeding on the surface. I pulled more onions and hung the garlic to dry 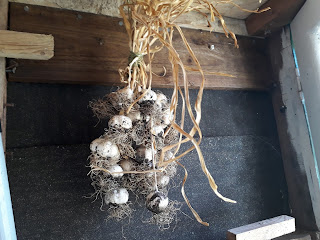 Every year I forget how to do it - not aesthetically pleasing but as long as it works and it's my best crop to date. I fed the fish again lunchtime and there was a blackbird sat on the concrete cat! The garden was busy with butterflies and birds and...the blue tits fledged late morning. It was fascinating and entertaining to watch as they flitted around the garden getting used to flying. This is the first year there's been two lots of fledglings. The damper on the day was another dead fish surfaced. It must have been dead for a while (no description necessary). Strange it's only just surfaced. I hope there's no more lurking in the weed.

The cottage garden is filling out nicely, I'm pleased with the ornamental grasses (potatoes in the foreground) 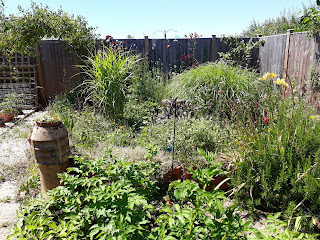 And talking of grasses, the ornamental grass in the pot we moved from the greenhouse bed to the pond bed has come into flower for the first time 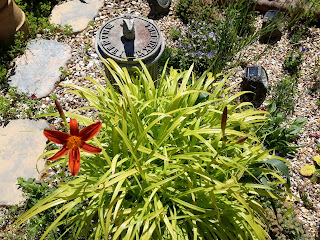 it's obviously happy where it is. And I'm now wondering if it is a grass??

Sunday - warm and sunny with a breeze. The first thing I did was check the pond and thankfully all ok except that, with the pump being on all night the water level is down about an inch so I turned it off. The fish are happy and were even on the surface for a while like old times. I pruned the pods on the sweet peas, trimmed the clematis and pruned the cherry tree 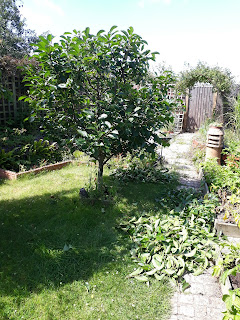 I planted out the outstanding seedlings to go in the garden and the lovage I got free with my purchases at the garden centre. It's quiet in the garden without the blue tits in and out. Last job of the day was water the pots.

Watched Friday's Gardeners' World and the only job relevant to me was trim back clematis (done) and watched Countryfile and the weather for the coming week is dry, becoming warmer then thunderstorms coming in on Thursday, apparently. Have a good gardening week and catch up next Sunday.