The thing with gardening is that no matter what the weather, the weeds will grow more quickly and profusely than the flowers, shrubs and vegetables. Well they do in this garden! Another gardening fact is that vegetables and fruit will take their time growing and then you wake up one day and they're all ripened and ready for picking. Except the cucumbers. This is only the third one (the other two weren't much better) from four plants. Honestly...it's a cucumber. 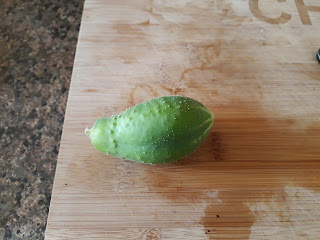 I didn't have much chance at the beginning of the week to get out in the garden but on Monday, on my way to feed the fish, I saw something big hovering around the verbena bonariensis. I peered closer (didn't have my glasses on!) and, to my delight, it was a hummingbird hawk moth. It's the first one I've seen. I was mesmerised as it hovered above the flowers then it's long tongue came out to get the nectar. I took these with my phone then dashed indoors to get the camera, but it had gone. I hope you can see it clearly. 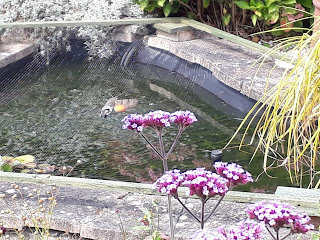 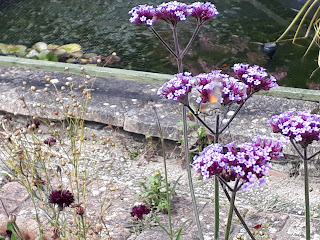 Thursday - sunny and windy. I picked the peas that were ready and then pulled out the finished plants, there's only a couple left now and I don't think there will be many more peas to harvest. The same with the french and runner beans. I finally got round to making the chilli oil. It certainly has a kick to it. 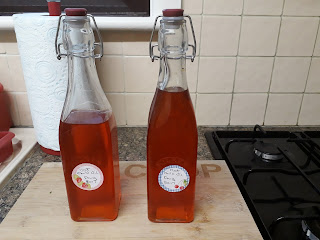 ﻿
I have enough chillies to make another batch and also chilli jam. Chillies are one of my successes this year. I picked the last of the plums and froze them and picked a couple of carrots for dinner - these were growing next to each other 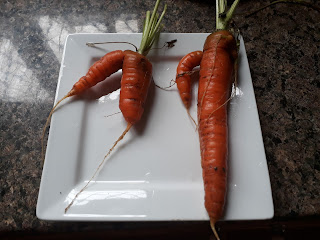 and I picked another pound of tomatoes - the freezer's getting full.

Friday - we had a few heavy showers and, in the words of the weatherman, there was a strong breeze. That was more than a slight understatement. It felt like gale force all day. One of the jobs for the weekend is to clear the area by the side of the pottering shed 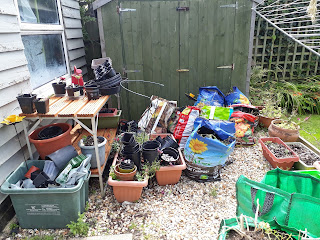 Saturday - warmer but still 'a strong breeze'. Him indoors cleared the area at the top of the garden where (hopefully) the new shed will be going 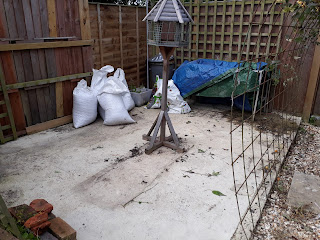 then he expertly de-weeded the path next to the cottage garden (looking good)... 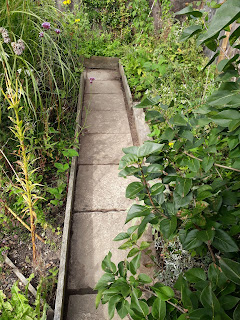 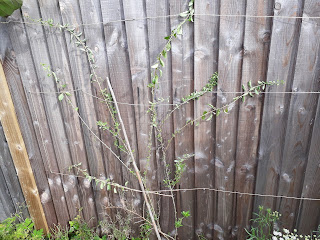 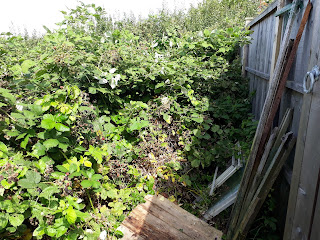 I tidied the greenhouse and cut back the yellowing leaves on the tomato and cucumber plants then I emptied all pots where the veg had finished producing. We emptied another of the pentland javelin potato bags and there was another 4lb 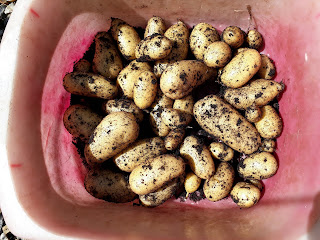 I then dug up one of the king Edward plants that has died off and they weighed in at a couple of pounds. 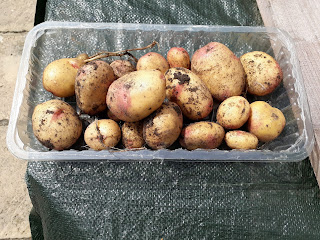 There's five more plants but they're not quite ready. Overall it's been a good year so far with the spuds, we've had a total harvest of just under 24lb. We also picked more (yes more) tomatoes and blackberries. At first glance there appeared to be an abundance of blackberries, but on closer inspection most of them had withered or gone mouldy. We were a couple of days too late. 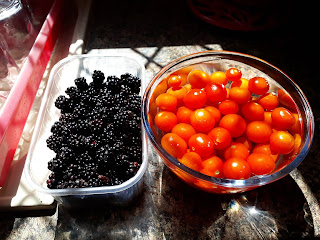 Flower of the week has to be this viola with its cute lion faces. 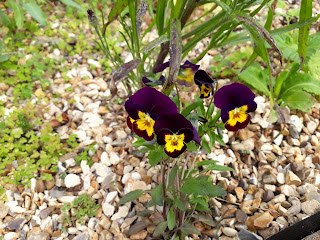 Him indoors cleared the area by the pottering shed...then we sort of ended up with more - 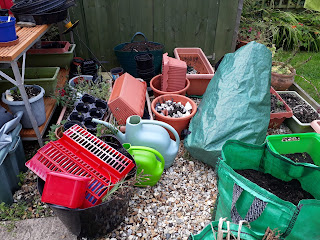 that's now a job for next week.
Rain came in late afternoon which is good for the garden after the wind drying it out. We watched Countryfile this evening and it's going to get warmer over the next couple of days then cooling a bit for the rest of the week but no rain...as yet. Tomorrow we have a trip to the recycling centre to look forward to and hopefully stop at the garden centre on the way back! Have a good week and catch up next weekend.
Regards,
DD
Follow me on Twitter @DaisyDigga﻿
Posted by Daisy Digga at 19:38