Where has the week gone...it doesn't seem five minutes since I last sat down to write my blog. It's been a mixed week with the weather, the only constant is that it has been cold. One thing that is noticeable is the days are gradually getting longer. On the sunny days it's still light until 5.45pm.

Monday - Storm Imogen arrived overnight and we were buffeted by 60mph-plus winds. Thankfully, there was no damage to either the house or garden; the greenhouse survived and the bird table was still standing. Imogen started to calm down towards the end of the day.

Tuesday - It was dark when I arrived home from work yesterday so the first thing I did this morning was to check for any damage from yesterday...all ok apart from the lid to the housing for the pond pump, it had been blown off so I secured it back on again. Lucky it didn't land in the pond. A flower on the amaryllis I was given for Christmas is starting to open: 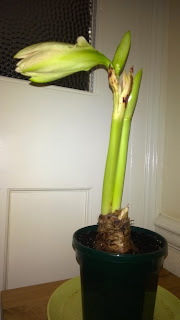 The hanging basket covering the robin food has been dislodged again so I am going to have to secure it somehow. Has to be a squirrel? Surely a magpie or pigeon couldn't move it that far. 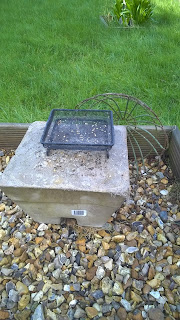 Wednesday - the antirrhinum and cerinthe seeds have broken through overnight but too small to take a pic. The amaryllis has opened more overnight - spectacular. 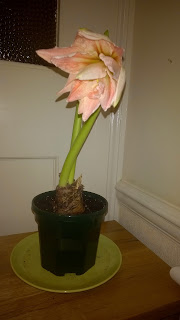 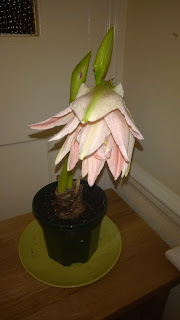 The younger of the fish were near the surface when I went out to check the garden (which I do every morning) so I fed them a small amount. Sunny today but cold. I put the freesias and garlic pots in the greenhouse because a frost was forecast. We were treated to a stunning sunset late afternoon.

Thursday - there was a heavy frost overnight, but only parts of the garden were frosty: 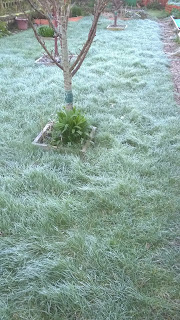 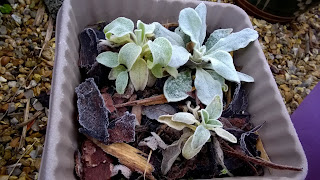 Strangely enough, the pond and a shallow, uncovered container of rain water had not frozen over. I put more food out for the birds, watched by a pair of blackbirds on the top shed roof. There was a pigeon on the bird table so I am going to have to sort out how to try and stop them - and the magpies - getting on there. The amaryllis is now fully open: 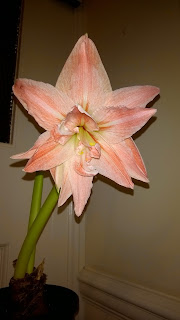 Saturday - yesterday was sunny, dry and cold - and would have been a good day for gardening if I hadn't been at work. Today started with high winds blowing heavy rain against the windows, it even sounded cold outside. When I finally ventured out it was bitter. I did a quick inspection of the garden and found another whole walnut on the lawn...very strange. Six sparrows were perched in a row along the back fence taking it in turns to feed from the seed feeder. It was nearly empty so I refilled it and then made up some more lard cakes and hung out bread soaked in lard. There was some sleet in the wind and contrasting against the dark clouds was a rainbow.

Sunday - not as cold today but still cold; quite nice in the sunny spells though. Some of the fish, including a couple of the larger ones, were on the surface this morning so, as the temperature was above 6 degrees (just) I fed them. Whilst I was having my breakfast in the conservatory one of the blue tits went in and out of the nesting box a few times. The sparrows returned and were joined by some blue tits and they all took it in turns to feed. A few of the seedlings in the propogator have grown so I have potted them on - one cherry tomato, three tomato tigerella and a red chilli. There are more starting to come through. I re-potted the broccoli and the kale seedlings. The kale I have put into two pots - one is in the kitchen with the other seedlings (no heater in the greenhouse and it's forecast to get colder this week) and the other is in the greenhouse; I will see which ones do best. I picked the remaining leeks from last year's sowing although I think some of them may be overgrown spring onions!

In the greenhouse the radishes are growing well 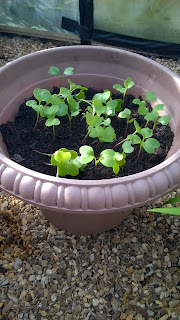 and so are the parsnip tops I planted a couple of weeks ago - wonder if they will actually grow into parsnips. 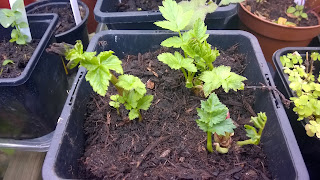 I have secured (hopefully) the hanging basket over the robin food 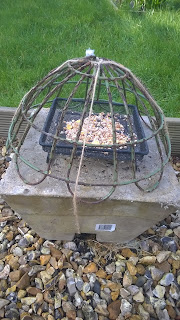 and I have put some gardening wire around the bird table to try and stop the pigeons and magpies eating all the food. 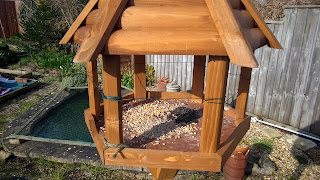 I will have to experiment with the height. And, perfect timing, as I was typing this, a magpie flew towards the bird table, flapped it's wings frantically and veered away, it's attempts thwarted. Hah! Yeesss! Fingers crossed it will keep working.

And there has been some new growth since last week despite the cold. 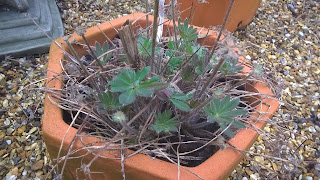 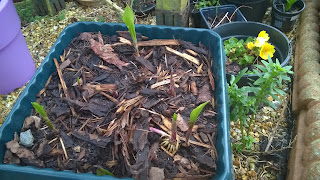 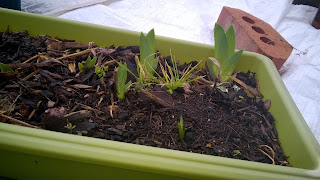 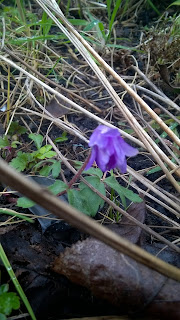 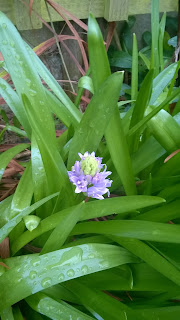 And I have no idea what this is so I have tweeted the RHS who always come up trumps.
Watched Countryfile this evening and it looks like the cold weather is set to continue. Down to -6 here in Dorset Monday night and maybe a sprinkling of snow Wednesday. But not as cold as it has been in New England, USA...-28 apparently!!
I hope you all have a good week and wrap up well if you're out in the garden. Catch up next Sunday with the next instalment of me vs magpies and pigeons!
Regards,
DD﻿
﻿