I hope you've all had a good week. I'm sending this out a little earlier today as I have a non-exciting commitment later on. It's been a cold week here in Dorset with hardly any rain.  Unbelievably, after all the rain we've had over the past month or so, the pots are already starting to dry out.

Monday - the day started drizzly but quite warm. The fish were on the surface early this morning so I fed them. The robin feeder, bird table and seed feeder were all empty and needed topping up (soaked the bread in melted lard as cold weather coming in). The sparrows were straight on to the seed feeder, vying for the perches. A pigeon lurked beneath waiting for any scraps that fell it's way. I did all this at 8.30am and by 4pm the seed feeder was empty and most of the food on the bird table had gone. A pair of blackbirds on the back fence watched eagerly as I topped up the food. I potted up the cherry tomato, cerinthe, chives and broccoli seedlings that have come through over the past week.

My neighbour popped round with my delivery of clematis I'd ordered from Gardeners' World (why is it that parcels always arrive when you're out?). I potted them into larger pots and leaving them indoors until they are ready to plant out as frosty weather is forecast for the next few days and maybe the rest of the week. The clematis are: Blue Dancer, Ernest Markham, Montana Rubens and Cirrhosa Freckles. My next job was to hang up the thermometer in the greenhouse - even I can see that without my glasses! 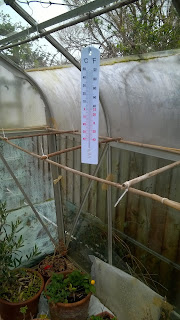 I put all the composting material into the bin near the back shed and noticed this growing amongst the daffodils...I don't know what it is or where it's come from as I didn't plant it: 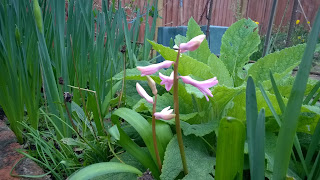 I didn't have time to plant out the redcurrant bush so I've put it in the greenhouse for the time being.

Tuesday - very frosty this morning but the pond hadn't frozen over. Clear blue sky and later in the day it felt warm...well, warmer than it did first thing anyway! I pricked out the tops of the sweet peas so they will grow more bushy and then topped up the bird food (yet again) as we were going to be away for a couple of days...him indoors is getting cabin fever not being able to get out and about much at the moment.

Thursday - the first thing I did on getting back home was to check the garden. Then I unpacked! The red chilli seedlings have grown and a couple of cherry tomato seedlings have come through. There are more daffodils in bloom and the honeysuckle is in leaf. 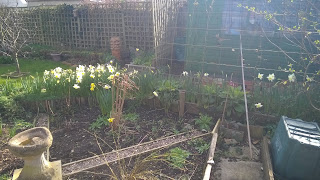 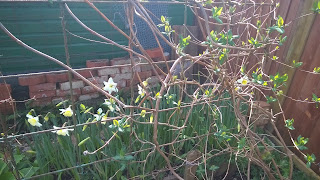 Indoors, the amaryllis has another flower - it's so pretty. 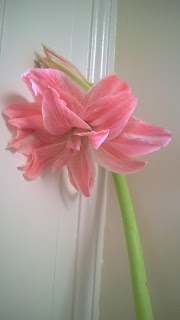 And this is the one that I grew from last year's bulb...huge but no flowers...maybe next year, hopefully. 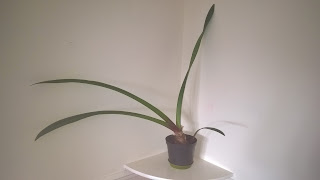 Friday - another cold morning but no frost, just a bitter wind. I was pleased to see a pair of blackbirds in the garden, I think they are nesting next door. The blue tit was in and out of it's house a couple of times before flying off. I sorted through all the seed packets and put them in month order for sowing - it appears I'm going to be busy in March. I then checked Gardeners' World magazine for jobs to do in March and now I'm going to be even busier! I started spiking/aerating the lawn - normally this would be a job for him indoors. And finally, I made a list of all the jobs that need doing once his foot has healed and he's no longer incapacitated!

Saturday - a bit cloudier today with a few sunny spells. Very cold in the wind. There was an abundance of sparrows early in the morning on the seed feeder and even the blue tits were joining in. A pigeon had a few abortive attempts at trying to get onto the bird table then flew off and left it to the blackbirds. More tomato and chilli seedlings have broken through overnight - they will need potting up next week. 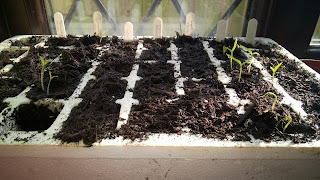 I braved the cold and spent an hour or so aerating more of the lawn watched by a chirping robin. Not much more to do now. Unfortunately, I won't have time to put down sharp sand and top soil but at least the spiking will help with the drainage. It is quite stony 3-4 inches below the grass. The fish were visible but I didn't feed them as the temperature was below six degrees.

More plants that have grown since last week are: this sweet pea from last year's roots. 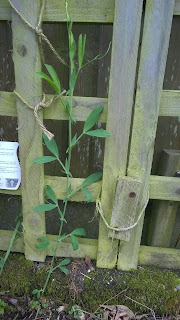 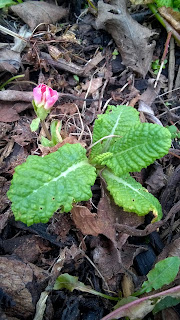 A primula just coming into bud, 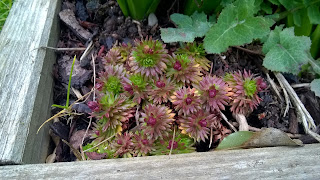 and a saxifrage over-wintering in a small bed until the rockery is built.

And a general winter view of the garden so far this year, the grass will need cutting soon I think. 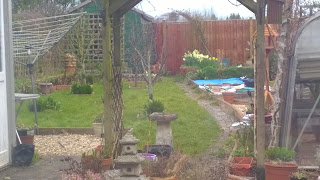 Sunday - at 6.38 this morning there were four blackbirds breakfasting on the bird table but no signs of other bird activity, not even seagulls.
Well, that's all for this week. Apart from rain coming in on Tuesday I'm not sure what the weather will be until I watch Countryfile this evening, but I'm hoping it's going to be decent gardening weather as I'd like to dig out all the weeds in the flower beds. I hope you all have a good week and catch up next weekend.
Regards,
DD
Follow me on Twitter @DaisyDigga﻿