Dorset Garden Diary - Not Enough Hours in the Day

I hope you've all had a good week. It's been a bit frustrating for me with regard to the garden. When I was busy and unable to get out there the weather was dry and sunny then, when I had some free time, it rained.

Monday - today was bitterly cold and very windy. I went out early morning to top up the bird feeders and hang out some more of the lard cakes I'd made. I didn't feed the fish as it was too cold. The basil and chive seeds have started to sprout and I noticed that last year's parsley has new growth on it. I  went shopping to stock up on more bird food and as I made my way to the checkout I passed the seed stands. So, of course, I had to look. I bought a packet of Chard (bright lights) and a packet of Mung Beans. 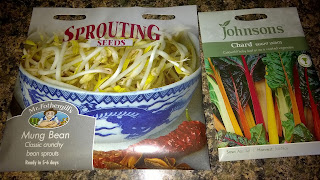 I have sooo much to sow this year...wonder if you can get fat on eating too many vegetables???

Tuesday - came home from work this evening and another flower has come into bloom on the amaryllis. 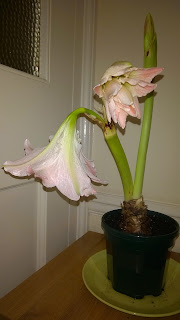 Unfortunately it was dark when I arrived home so I couldn't check the garden.

Wednesday - woke up this morning, drew back the curtains and there was a pigeon looking at me. Hmmm...wonder if it's stalking me for booby-trapping the bird seed! 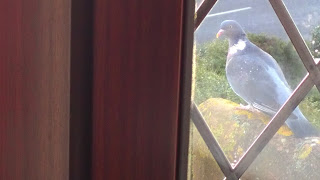 There was a light frost this morning but not enough to freeze the pond. I was delighted to see that my efforts to stop the basket over the robin food being tipped over have paid off - it's still in situ. 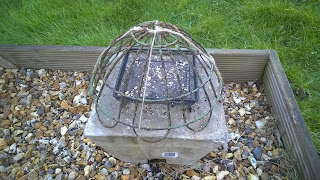 And...whilst I was having my breakfast a female blackbird fed from the bird table whilst the pigeons jealously wandered around underneath, so that deterrent worked as well. There was a lot of sparrow activity at the top of the garden. The seed feeder was nearly empty so I replenished it and the sparrows were straight on it as I walked away. I fed the fish a bit later in the morning and they surfaced after a few minutes to eat. Another cherry tomato seedling has emerged which I will pot up, hopefully at the weekend. Bought a redcurrant bush this evening, some plant tags and a thermometer for the greenhouse...I used to shop for clothes and shoes! This afternoon clouded over and we had torrential rain on already saturated ground.

Thursday - today was sunny all day but very cold. Unfortunately I had plans so couldn't make the most of the weather.

Friday - it was initially forecast to be a day of heavy rain, then it changed to be a sunny morning and heavy rain in the afternoon, but all that happened was a steady light drizzle from around 4pm. I couldn't feed the fish this morning because it was too cold, but fed them early afternoon when the temperature had risen. The adult fish were near the surface and the food soon disappeared. The seed feeder was empty again this morning (only filled it up on Wednesday) so I topped that up amidst the chattering of the watching sparrows. I topped up the robin feeder and the bird table with bread, sunflower seeds and suet meal worm pellets. When I came indoors there was a blackbird sat on the roof of the bird table. By the time I came home later in the afternoon most of the food had been eaten. In the greenhouse there are more buds on the freesias; the kale and radish seedlings are coming along nicely, as are the broccoli and kale seedlings in the kitchen. In the garden, the growing bluebells have forced through a thyme plant and pulled it out of the ground: 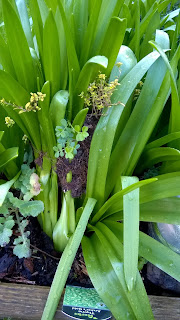 and one of the primula's I bought last year has come into flower -pretty and delicate (like me, of course!). 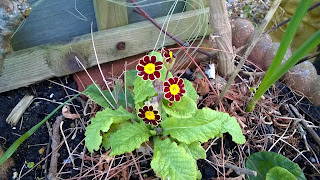 The one job I haven't had time or this week, and I must do soon, is sort out all the veg and flower seeds that need planting in the next week or so.

Sunday - I haven't managed to get out in the garden this weekend due to work commitments (I'm starting to get withdrawal symptoms) but I have come home with more composting material and some stale bread for the birds. I haven't even had time to pot up the cherry tomato seedling. I was having breakfast in the conservatory yesterday and noticed a female blackbird on the bird table. It sat there for ages and I wondered if it was injured, hoping it hadn't hurt itself on the pigeon-deterrent wire. I went outside and cautiously checked but it appeared to be fine. I needed to top up the food on the table but first I wanted to take a pic of the blackbird. I managed to get quite close and into focus and it appeared to be posing for me. As soon as I went to take the pic it flew away. I topped up the food and also fed the fish, turned the composter and put the redcurrant bush outside to be watered by the rain.

Lovely clear sky tonight illuminated by an almost full moon (which is tomorrow night). I doubt if there'll be a sight of it as the weather here in Dorset for tomorrow is rain, then it's getting cold and sunny with some night frosts...and we could be getting some snow by next weekend.

I hope your week goes well - it's nearly time for some serious seed sowing! Catch up next Sunday.