Dorset Garden Diary - I Have my Garden Back (For the Time Being)!

I hope it's been as nice with you this week as it has here in this part of Dorset. It started off cold then gradually warmed up as the week went on. The shed base is now done and I have my garden back - for the time being anyway. We still have to have a new shed and the new greenhouse is hopefully arriving next week.

We were away for a couple of days at the beginning of the week on a mini break to Bath and surrounding area. We arrived home late Tuesday afternoon and there were lots of hungry fish waiting to be fed. I cleaned off the bird table and put out fresh food and potted up the cuttings I acquired from the tub on the balcony of our hotel 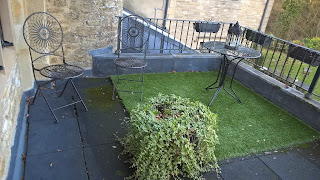 On the way home we popped into the local DIY/garden centre. They were selling primroses at £1.50 each or six for £6. That's not bad I thought. I went for a wander and came across the clearance racks and there were trays of six primroses reduced to £2 a tray. I walked back to the others and I couldn't see any difference so I bought three trays at £2 each - 18 primroses for £6...bargain! 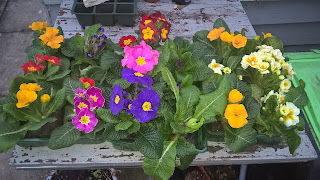 The atmosphere early evening as the sun was setting through the low cloud and mist was really eerie.

Wednesday - this morning there were three or four pairs of blackbirds flitting around, flirting and squabbling. The workmen were going to come and finish off the shed base but it was forecast rain later in the day so they changed it to tomorrow. I was working most of the day which left him indoors to potter in peace. He tidied up his workshop and did some domestic duties (from his own list, not mine!).

Thursday - a gorgeous sunny day and the workmen were able to finish the shed base. 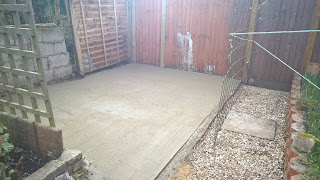 When I arrived home from work it was all done and they were clearing up. They've done a good job of a) the bases and b) clearing up...the garden isn't a building site anymore! Him indoors has replaced the trellis on the arch near the patio 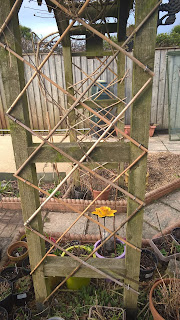 Friday - another lovely day and gradually getting warmer. I took a leisurely stroll around the garden and I'm amazed at how quickly plants suddenly sprout up. The iris reticulate which will go in the new rockery once they've finished flowering 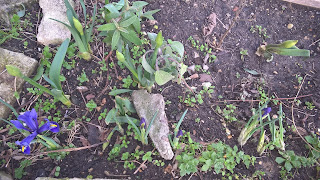 The photinia that has suddenly sprouted red leaves 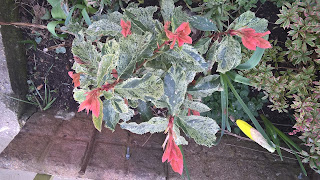 Bulbs in the aubretia bordering the cottage garden 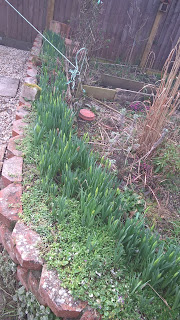 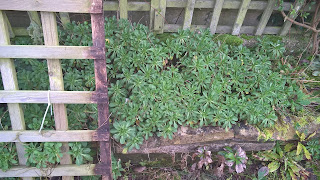 I rinsed the cement dust from some of the shrubs and plants near where the workmen had been then I re-potted more parsley seedlings, sowed mustard, cress and micro rocket seeds and took the larger pots out of the workshop so that the shrubs can benefit from the mild weather we're having. I noticed that the free charlotte mixed spuds I received had started to chit in their packaging so I put them in an egg box in the pottering shed. 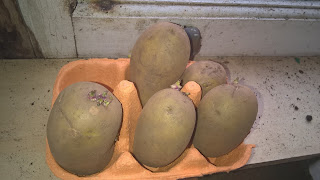 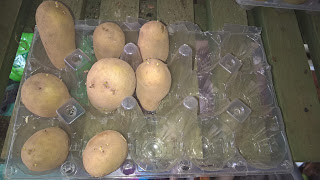 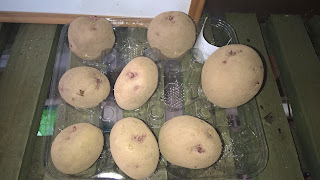 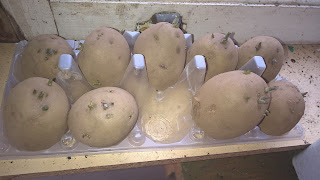 Saturday - it was foggy first thing then the sun broke through and we had a lovely day, hopefully spring is not too far away. I was working this morning, when I arrived home my first job was the rockery. I sorted out a few plants and bulbs to put in but I need more so it's still a work in progress. I then planted the bargain primroses, they are so vibrant and cheer the garden up. Next job was to pot up the razzmatazz chilli and tomato garden delight seedlings that have surfaced in the propagators. I then sowed more, plus cucumber beth alpha, verbena and coral reef poppy. One thing I have noticed...since the workmen have been around the blue tits haven't been near the garden so much. I'm hoping that they'll come back now it's quiet again. It could be because we had to take down the trellis near the nesting box and it is now a bit exposed, but once the new greenhouse is in we can put the trellis back up. The fish have been hungry today, I've fed them four times. They are swimming just below the surface like mini golden submarines. I checked the plants in him indoors' workshop and all are doing well. The mimulus seedlings have started to sprout - they are so tiny 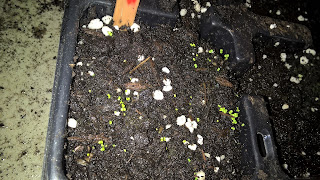 and so have the cress that I sowed on Friday! 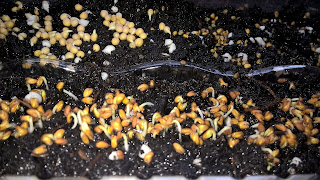 Sunday - I had to work today but as it's been grey and cloudy I didn't mind. It was supposed to be mild but I've been cold. I fed the fish this morning before I left and when I got back this afternoon and that's all I've done garden-wise today.

Well, that's another week gone by - where does the time go?? I watched the weather on Countryfile and it looks like it's going to be a dull, cloudy, damp and mild week turning colder towards the weekend. Hopefully I can get the rockery finished and I also have more plans for the back garden. Have a good week and catch up next Sunday.