Another early posting this week as I have to work today...you know when you wish you hadn't said yes!

Monday - rain set in yesterday and continues today. In fact it's forecast all week, just when you don't need it as the workmen are at the stage of laying the concrete bases. Him indoors moved the trellis that was leaning against the fence (high winds expected this week) and he moved the larger pots out of his workshop as it's turned milder and the rain will do them good. He refined the bird table, my design but neater.

His next job was digging out the hydrangea that had been growing by the greenhouse. I'm thinking of putting the gardenia there, maybe. This year I am determined to get the alpine garden done as I ran out of time last summer. He tidied the honeysuckle across the top arch, dug out thorns, fixed the netting over the pond that had dipped into the water (yet again) and loaded the car with rubbish for the recycling centre. All in the rain, bless him. The cress has nearly quadrupled in size since Saturday 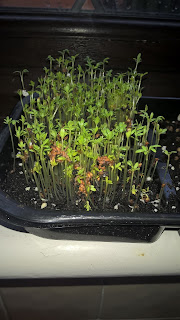 Tuesday - and more rain, but just drizzly today then it eased. Him indoors covered the veg patches with plastic to keep the weeds down and warm up the soil ready for spring planting. 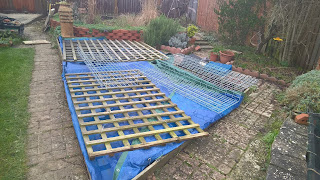 Whilst he went to the recycling centre I fed the fish, at least a couple of dozen were waiting for food. My free Charlotte seed potatoes arrived today together with individual small bags to grow them in. I also have a voucher for more free potatoes which I will collect next week...I think it's going to be the year of the potato as I already had my early's, salad potatoes and main crop. When him indoors came back he made a start on the front garden rockery. I was going through my gardening pic files and, embarrassingly to say, I got the rockery stones in 2015 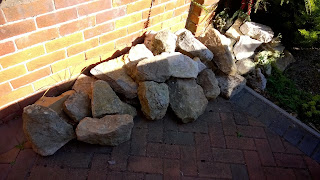 and we're only just getting round to building it...shame on us! 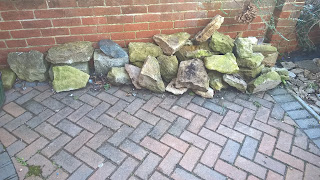 So far he's put down the initial hardcore base on top of new weed suppressant material. 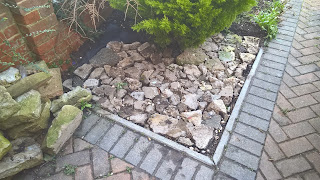 The workmen arrived to get on with preparing the greenhouse base for concreting. I think that him indoors was secretly trying to keep up with the youngsters because he's done his back in working on the rockery. A classic case of the mind being willing and the body groaning NO!!

Wednesday - today was dry and the workmen arrived before 8.30am and started on the concrete base 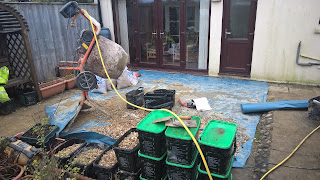 Thankfully it was all done by the time the rain came back late afternoon. Hopefully they will be  able to do the top shed base early next week 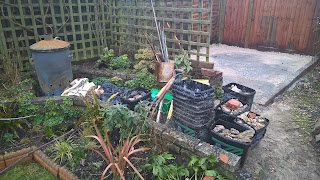 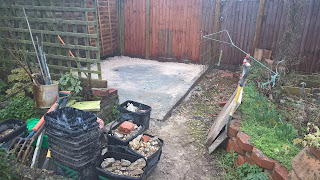 Thursday - very windy today but mild at 13C 55F. And the rain that was forecast didn't materialise although it did come over dark at times. The workmen popped back to check the concrete was setting and took the plastic cover off. Mid afternoon black clouds appeared and they rushed back to cover it again and fasten it securely as we were expecting gale force winds 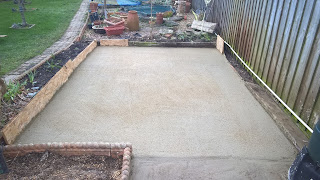 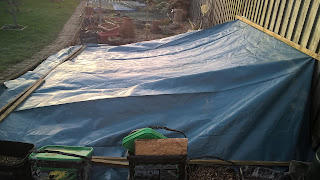 I cleaned the bird table. A lesson learnt here...I've been putting broken up suet balls on it for the blackbirds and what hadn't been eaten had stuck to the table like glue. So I had to scrape it all off then pour boiling water on to clean the fat off. I'll stick to seeds in future, I think.

Friday - amazing sunrise this morning but it soon clouded over and, just as I was heading out the heavens opened and the wind was blowing the rain horizontally. By late afternoon it had picked up even more and was buffeting everything. The skip was collected today. I was in all afternoon but never heard a thing! 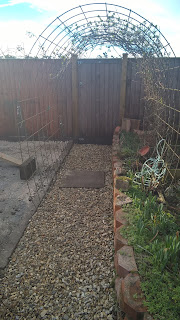 When they'd gone I topped up the bird feeders. The frog replaces the ladybird I returned because birds don't like red - see last week's blog. And now, writing this, I've just realised I need to take down the red seed feeder for the same reason. 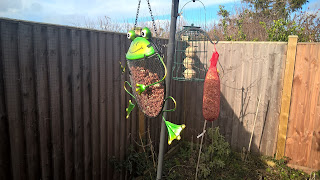 Just popped outside and taken it down, I'll empty the seeds and put them on the bird table
I checked the propagator and the flax have turned into mini triffids over the last couple of days 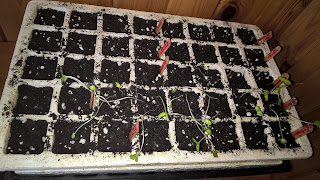 plus the little gem lettuce has started to grow. I potted them up, put the flax in him indoors' workshop and the little gem on the kitchen windowsill. The blackbirds were back on the bird table today - I've put out more seed and a few blueberries as a treat. 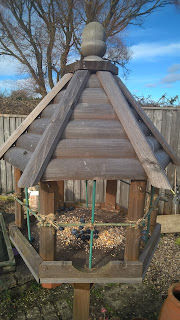 Well considering the weather we've had and the fact that, when it was dry the garden was taken over by the workmen, I think we've managed to get quite a bit done this week.
Sunday - cloudy and dull this morning and it must have been windy in the night because a few light things have been blown around. I haven't seen the weather forecast for all of next week but it's going to be frosty tonight, rain tomorrow then getting colder as the week progresses, so I may need to put some of the large pots back in the workshop. But it does look like the workmen should be able to finish. Have a good week and catch up next Sunday.
Kind regards,
DD
Follow me on Twitter @DaisyDigga
Posted by Daisy Digga at 08:25