It's been a mainly cold week with no progress on the base for the top shed...it's either been forecast rain or too cold for the base to set. After I posted last week's blog I went out to feed the fish and check the bird food before I went to work - the blackbirds hadn't touched the blueberries, yet they're quick to eat them as they're growing!

Monday - there was a thick overnight frost which soon melted when it clouded over and the rain came. The new peanut feeder, Mr Frog, appears to be popular with the blue tits and the blueberries had been eaten.

Tuesday - it was a lovely sunny morning and warmer than it has been for some time, then in the afternoon it clouded over and rained again. The daffodils in the front garden are coming into flower (yes, I know, it needs tidying up) but there's only one in the back garden. Maybe it's warmer out the front. 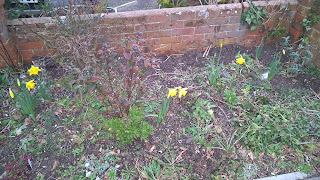 I chopped up an apple and put it on the bird table together with seeds and mealworms.

Wednesday - quite a nice day and quite warm in the sun. I managed a couple of hours in the garden before the clouds appeared. I moved the lemon plant, lemon verbena and acer back into the workshop as it's going to get colder again from this evening. I had a walk round the garden as it's been a bit of a no-go area and all of a sudden it's come to life. 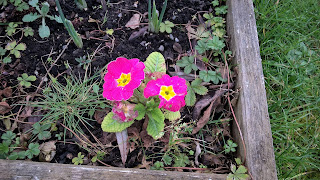 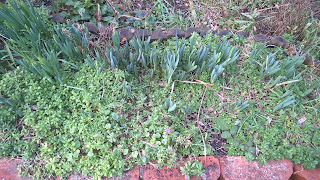 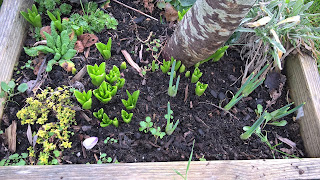 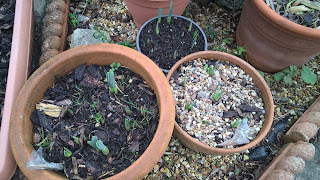 Buds on the hellebore 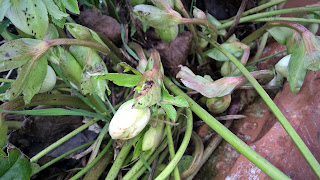 New leaves on the goji berry 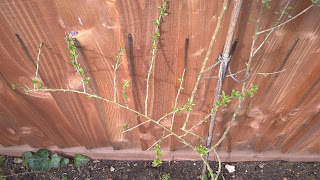 What looks like brown catkins on the hazelnut tree?? 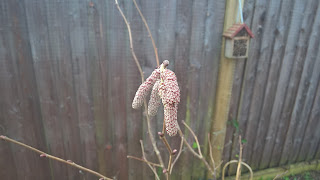 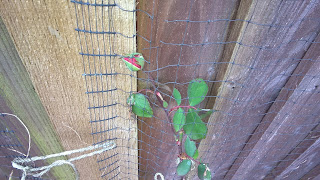 And the yellow moon onions have started to grow 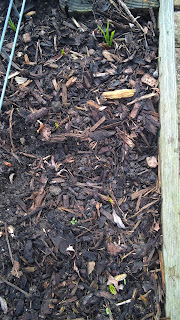 The garden still resembles a building site though. There was a bumble bee in the cottage garden, a robin on the suet ball feeder, a great tit singing from next door's tree and blackbirds sitting on the fence singing. It was like a scene from a Disney film...thank goodness they didn't start talking to me! All the apple was gone so I chopped up another and also put more blueberries out. A couple of the blackbirds immediately came over to investigate. I pruned back the sweet peas in the workshop as they are growing too quickly (the calendula are doing well - back right) 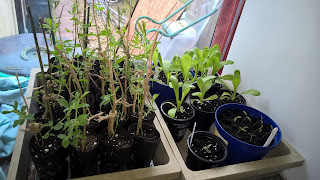 then potted up the spring onions from the propagator and planted the remainder of the union troy onions into a large pot. The garlic in the workshop are coming along nicely, I'll need to re-pot them soon. 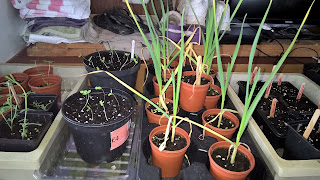 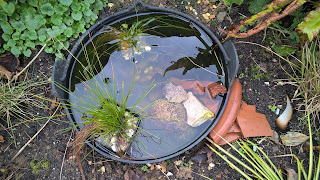 Thursday - the coriander micro seeds are finally starting to grow but too small to photograph at the moment. It looks like one of the azaleas is on the verge of flowering 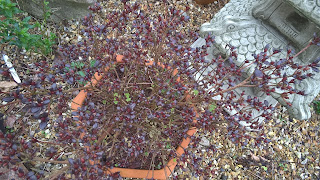 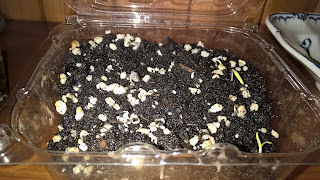 There were two pairs of blackbirds taking it in turns to feed off the bird table and one lonely pigeon waddling around looking for scraps. I almost felt sorry for it.

Friday - cold all day today. I made some lard pellets covered in flour and put them on the bird table - they proved popular. A few of the fish were near the surface. As you know I have been feeding them all winter which is unusual because the last couple of years we haven't seen them until the winter's nearly over. Amazing full moon tonight in a clear frosty sky.

Saturday - just when you thought it couldn't get any colder... The blackbirds were back early this morning, it seems we are the restaurant of choice at the moment! We had a few light snow flurries this morning but not enough to settle. The workmen were supposed to come and do the shed base but apparently it was too cold for it to set. Him indoors and I finally got round to starting the rockery 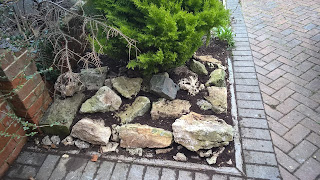 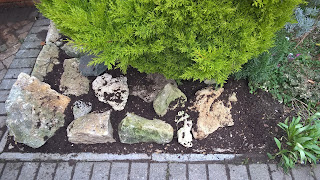 It was bitterly cold out there today. I will start putting the plants in next week.

Sunday - not quite as cold but windy. All the food has been eaten on the bird table - there must be some very fat blackbirds flying around. I've topped it up, fed the fish and checked the top feeders which are ok. That's all I'm doing today!

The weather for the week ahead looks like it's going to warm up a bit and there could be a chance of rain, it's all very vague at the moment. As long as the workmen can get finished.... Have a good week, stay warm and catch up next Sunday.