Dorset Garden Diary - The New Greenhouse and Success with Cuttings

Most of the week has been either windy, cold or raining and, in some cases, all three. So its not been the best of gardening weather. I'm still amazed at how quickly flowers and shrubs come to life. One day there's nothing then the next morning there's a bud or a leaf...an exciting time of year.

Monday - I didn't venture out today apart from feeding the fish (there's more frog spawn in pond) as it was cold and windy with heavy showers.

Tuesday - sunny today but bitterly cold in the shade. I checked the plants in him indoors' workshop and gave them a water. The blue tits spent the early part of the morning in and out of their nesting box and a couple of blackbirds were splashing around in the bird bath. The hellebore is brightening up the garden 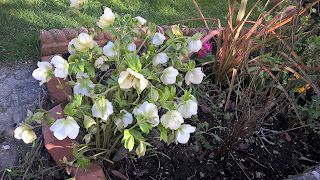 and an artistic shot of frog spawn in the late afternoon sun! 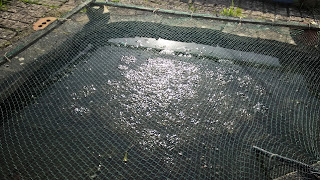 Wednesday - a dull day but at least it was calm. Then the rain came. I topped up the bird table, the blackbirds had moved all the seeds they don't eat to one side. I saw a pesky pigeon taking liberties with my slightly altered design and sitting on the bird table - I went out and it flew away. I've put it back to how it was. One thwarted pigeon.

Thursday - it was a wild night but thankfully there was no damage. The greenhouse erectors arrived just before 8am and finished early afternoon. I am sooo pleased with it 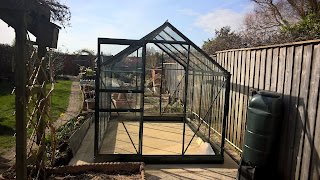 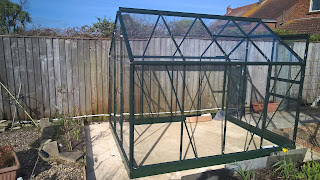 It's smaller than the previous one but there's still plenty of room for everything. Him indoors re-stained the wooden shelving unit for me. We then ummed and aaahed about putting the trellis back up along the side and the back to diffuse the sun but we couldn't agree on how to do it as I didn't want it attached to the greenhouse. A primrose has started to grow through an existing one and it looks like it's one plant with purple and yellow flowers 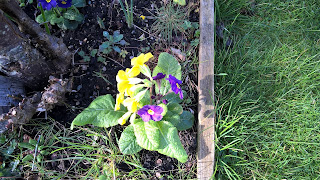 Friday - heavy rain this morning. The heron arrived whilst we were having breakfast and perched on the back fence 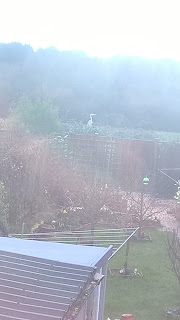 It was probably thinking 'there used to be a shed here!'...that was its favourite landing spot. The seagulls didn't like the heron being there and kept dive bombing it. Him indoors started to secure the side fence where the top shed was. We then had another discussion about putting up the trellis and decided not to. Not having it up is giving us a better view of the garden. 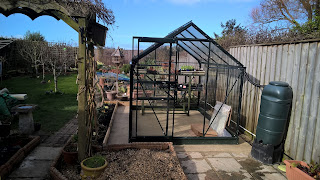 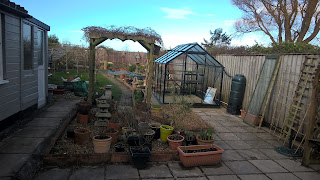 We'll just use the trellis temporarily for growing veg against the greenhouse in the summer. Him indoors says I always grow too much anyway, but I have to over-sow in case some of the seeds don't grow. Then, when most of them take, I have to grow them all! Now we aren't putting the trellis up I am having to rethink what to put in the flower beds bordering the greenhouse. Hmmm...I can feel some spending coming on!

Saturday - apart from a couple of short showers it's been a mostly sunny day and a bit warmer. I transferred the pots from the workshop into the greenhouse 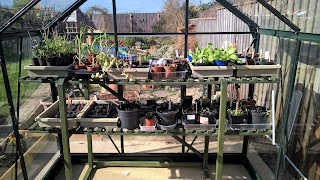 I trimmed back the sweet peas and checked the cuttings I took late last year for signs of new growth and I'm pleased to say that more than three-quarters of them have taken. Doing especially well are
eunonymous 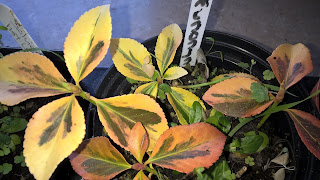 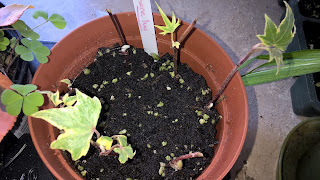 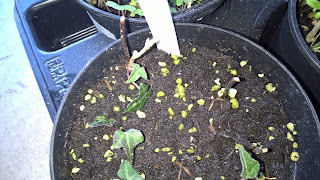 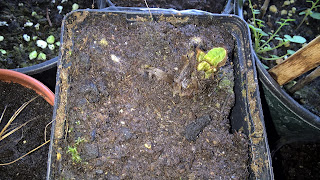 calendula and parsley grown from seed﻿
﻿
﻿ 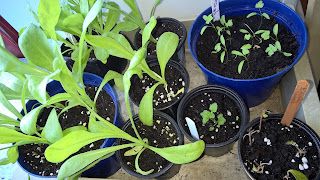 Also, in the last couple of days more seedlings have appeared so I re-potted them - peppers, razzmatazz chillies, spinach, tomatoes, verbena bonariensis, nigella and mimulus. I also planted some of the onions that didn't grow much last year to see if they will this time. There was plenty of birdsong to keep me company and apart from the blackbirds and sparrows, the robin made an appearance and there was a woodpecker close by. Plus...the geese flew over on their way to the RSPB reserve. I dug out a climber (I think it is a clematis) from the bed at the back of the greenhouse and have replanted it near the back fence and in its place I planted the black flowered hellebore 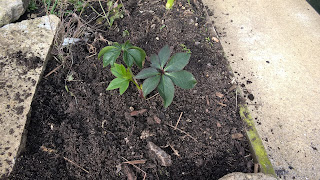 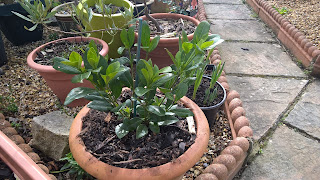 and planted the viburnum bodnantense dawn inbetween the climbing roses in the back bed. I intended to plant out the viburnum Kilimanjaro but there are daffs in the way so it will have to wait. Last job of the day was to finish weeding the cottage garden...some of the plants have new growth on them. Actually, it was the penultimate job of the day. The last job was place a plants order!!
Sunday - another wild night and gales are forecast all day. It's so nice to look out on the garden and be able to see it all...looking forward to the summer.
Well, that's it for this week, prior commitments beckon. I think the weather for the week is staying warmer with sunshine and showers but of course, that will probably change. Have a good gardening week and catch up next Sunday.
Regards,
DD
Follow me on Twitter @DaisyDigga
Posted by Daisy Digga at 08:26