Not the best start to the week due to the weather and my work commitments. But, it has gradually been getting warmer as the week's progressed which is just as well because the jobs were starting to pile up.

Monday - the frog/toad spawn has flattened out and was producing air bubbles. I was reading an article about frogs and toads and although, obviously, frog spawn develops into tadpoles I didn't  realise that if it's toad spawn they're called toadpoles. So, we'll have to wait and see what we've got. I don't think we'll have to wait long!

Tuesday - a busy bird day today. The blackbirds and robins were feeding off the bird table and the blue tits were in and out of their nesting box. It would be nice if another pair of blue tits took up residence in the other nesting box further up the garden. It's been up for two years and nothing. I decided it was time to start hardening off the greenhouse seedlings and cuttings 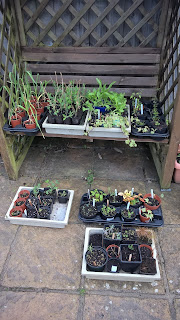 Once I'd put them outside I was unsure if it was the right thing to do as, although it was milder, the wind had picked up. I left them out all day but put them back in the greenhouse for the night.

Wednesday - the day started rainy and windy then in the afternoon the sun came out and it was very pleasant. I pruned the olive tree, the corneus back to it's base and planted it in the top bed and both the 'for your eyes only' roses...I have also planted cuttings of all three. I moved the bay tree from the top of the garden back to the gravel garden near the patio as it wasn't happy (the leaves are pale rather than dark). It's now in partial shade and I gave it a good prune, equivalent to a number three cut. Late in the afternoon two pigeons were sifting through the mound of gravel from the old greenhouse.

Thursday - a gorgeous day. Mild and dry with sunny spells - perfect day for gardening. I scattered my free poppy 'red pom pom' seeds in the cottage garden then I brought the plants out of the greenhouse again. In the afternoon the temperature reached 64F 18C. One of the gooseberry cuttings has taken and it's come into leaf 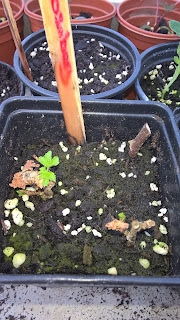 and one of the winter jasmine 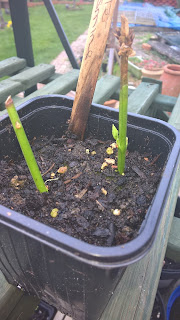 This aeonium wasn't happy last year because I forgot to bring it in overwinter. This year it's been in the greenhouse and it's sprouting leaves up it's stem not just on the top. They started off lime green and now they're turning purple 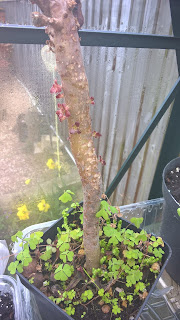 The resident daffodils are looking good framing the cottage garden 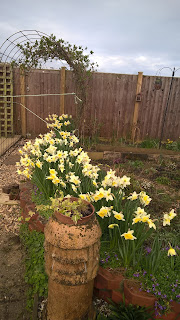 and I'm pleased with the newly planted double daffs - pretty 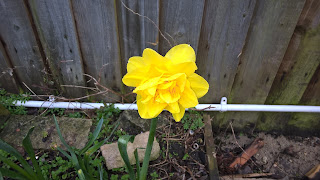 One of the jobs to do in March is top dress container-grown plants which means scraping out the top layers of the existing compost without damaging the roots and topping up with new. I top dressed the lemon tree, the blueberry (and gave it a prune), the olive and the lemon verbena (pruned and cuttings planted). I fed the fish and saw that there were some I haven't noticed before - a couple that are black and long and shaped like miniature catfish and what looks like a silver angel fish!

I pruned back the perennials in the front garden and added more gravel to the rockery. When I was putting the plants back in the greenhouse there were a few ants crawling on the shelving. Horror! I had a problem with them last year in the old greenhouse where they had nested in the gravel and soil base then took up residence in one of the grow bags. They've obviously 'come home'...or think they have!! I've put down plenty of ant powder.

Friday - foggy. I put the greenhouse plants outside again and made the decision to plant the meconopsis (blue poppy) in the cottage garden as it's growing fast and the weather appears to be mild for a few days. I also planted up the garlic that had started off in individual pots. The roots were entwined around the drainage polystyrene I'd put in the bottom. I didn't want to damage the roots so I've replanted them with the polystyrene attached. Some of the roots had actually grown through it. 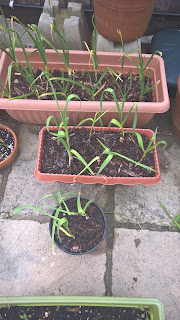 As I was pottering, an enormous bumble bee buzzed around the garden, feeding from the hellebores. Which reminds me, the other day I was in the garage and there was a bee on the window, a honey bee think. I thought it was caught up in a cobweb (I'm not so good on the domestic goddess front where the garage is concerned). It moved but it appeared exhausted. I found a plastic container and tried to manoeuvre the bee into it but it started buzzing frantically. How do you tell a bee you're trying to help it! Anyway, after a few abortive attempts the bee crawled into the container and I managed to get it to the door and outside where it flew off. This afternoon I sorted out the seeds for sowing this month.

This morning there was a ring of bubbles around the spawn. I checked on the internet and it could either be too much aeration in the water or too much protein (not surprised with all the spawn and fish in there) but it had disappeared by lunchtime 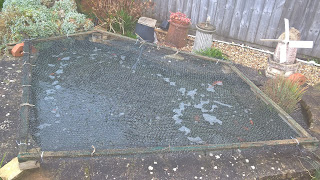 Saturday - a stunning sunrise and a warm, spring day. I fed the fish then sowed cucumbers (the previous ones don't appear to be doing anything), peas (including sugar snap), lettuce, kale, yellow alyssum and I scattered a couple packets of hardy annual seeds that had come free with gardening mags. The miniature lupin is growing again 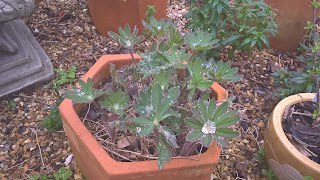 and I've grown these three from it's seeds 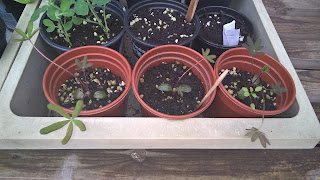 the quince tree has come to life 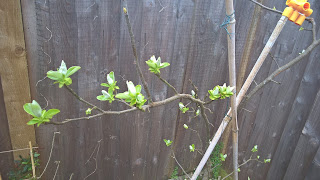 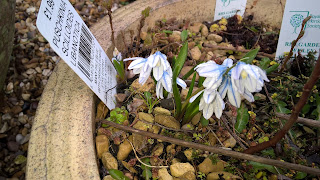 Sunday - what a difference a day makes. Today is foggy and raining and not quite as warm. There wasn't much I could do in the garden so we went to a garden centre and had a look round. I was very good, I only bought some high nitrogen food and liquid seaweed feed. We did see an outdoors combined clock and barometer that we liked though...maybe another time.

Well that's about it for this week. The weather looks like it's going to continue mild and mainly dry through until next weekend which will make the garden grow. I have already started my to-do list! Have a good gardening week and catch up next weekend.