The jobs are starting to build up now. I'm still hardening off the plants in the greenhouse but unfortunately, although it's been reasonably mild in the day there's been a couple of nights where it's been nearly down to freezing so I have to put them back each evening as I'm still awaiting a cold frame...him indoors take note.

Monday - we had a day off (yay!). We went to RHS Garden Wisley in Surrey and we couldn't have chosen a better day. It was sunny with a slight breeze so one minute it was too warm with a coat on then, when we walked in a different direction, we needed them on again. Here are some photos 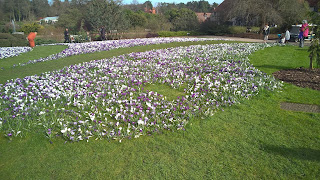 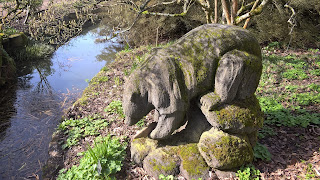 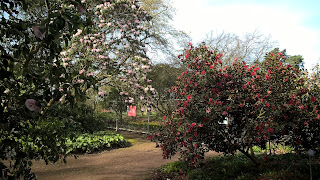 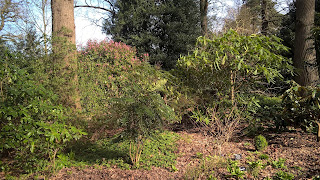 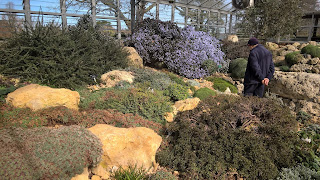 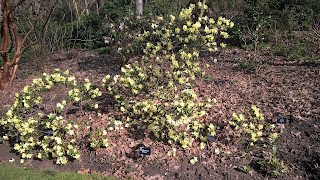 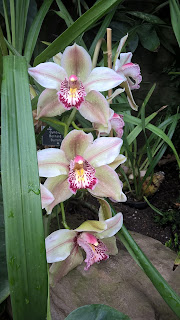 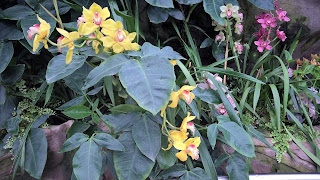 Tuesday - colder and cloudier today. I noticed when I was feeding the fish that the water lily is sprouting leaves, which reminds me I want to buy a miniature one for the cauldron pond. I put out the greenhouse plants then cleaned and replenished the bird table. On an inspection of the garden I see that the cherry tree 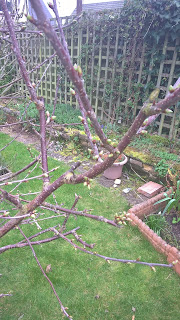 and the pear tree 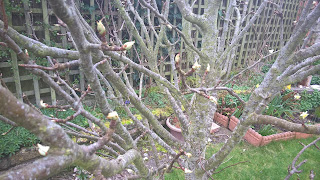 are coming into bud. I didn't really do much in the garden today apart from some tidying up.

Wednesday - what a dull and dreary day. I hardened off the plants and did some more tidying up. The tomatoes, peppers and chillies are doing well 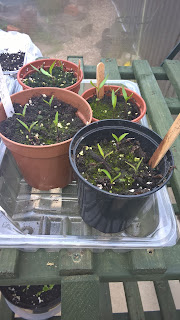 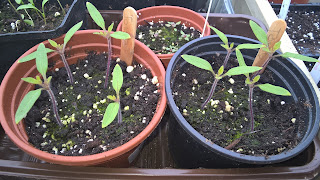 and the radishes have started to break through 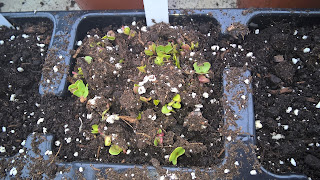 Thursday - it was misty for most of the day but milder. The calendula and sweet pea plants look ready to be planted out but I'm still reluctant yet as I don't want to lose them after all the TLC they've had 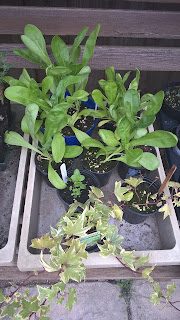 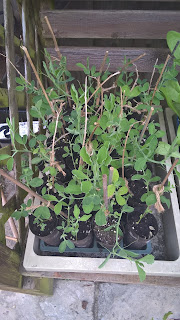 There were three blue tits fluttering around the nesting box today...interesting! And...arrgghhh...there was a magpie on the bird table. There were others on the lawn but this particular bird seemed to be the only one capable of getting on it, so my design sort of works. I planted out a blackcurrant sage that I've grown from a cutting and is now hardy. Then I made a start on the moving the mound of gravel that came from the base of the old greenhouse and was dumped on the potted herb garden (pots removed beforehand, of course). I'd removed about 18" or so (not good for my back, shoulders etc etc etc) when I came across this plant 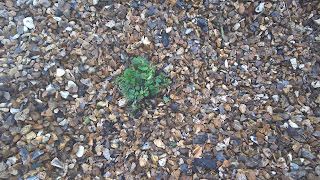 It looks like wild basil. How on earth did it grow that far under the gravel???

Friday - gorgeous sunrise and morning then it clouded over and the wind got up. I was out all morning and by chance this afternoon I happened to look out the window so see someone standing on the front doorstep. I opened the front door and there was a delivery man with the plants I'd ordered. Apparently the doorbell isn't working...it's on him indoors' list! Lucky I looked out the window when I did. I unpacked everything 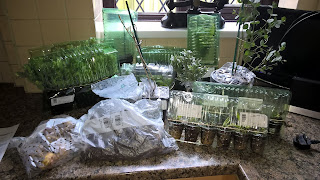 sorted them out and put them in the greenhouse until a) the weather warms up a bit and b) I have the time to plant them out. These include more ground cover, plants for the new borders by the greenhouse and shrubs for pots for the back of the greenhouse.

Saturday - the forecast for the weekend was showers but mild, maybe windy. I wasn't going to be around until tomorrow afternoon so after much umming and aaahing, I made the executive decision to put the greenhouse plants out this morning until tomorrow (some of the shrub cuttings that have taken have been left out all week). I hope I've done the right thing. There's some duckweed in the pond that I need to remove and also the aerating plants are starting to take over but I can't thin them out yet because of the tadpoles and (hopefully, soon) the new batch of fishlings.

Sunday - well...so much for a milder weekend. Milder as compared to where I'm wondering?? And windy! I nearly got blown over today. Anyway, back home and straight out into the garden to check on a) the fish - hungry, and b) the plants which, thankfully, survived their night of camping out. I've put them back in the greenhouse for tonight. And talking of the greenhouse, guess what my first job is tomorrow - re-planting the rampant radishes! 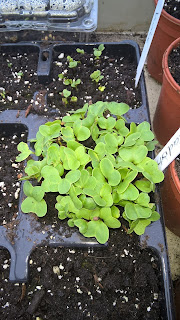 And finally, now and again a flower just stands out against everything else...this primrose is mine of the week 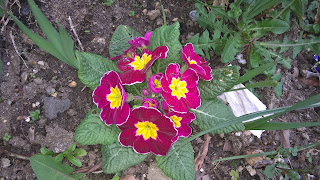 Well, it looks like I won't be planting out anything this week as the weather is predicted to drop below average and we could have frost and wintry showers...but I'm sure I can find something to do!