Dorset Garden Diary - Pruning, Sowing and the Greenhouse Has Gone

An early blog this week as I have commitments today. It's been a busy week tidying up the garden, together with the greenhouse and top shed coming down.

Monday - I wasn't expecting such a thick frost, everything in the garden was frozen 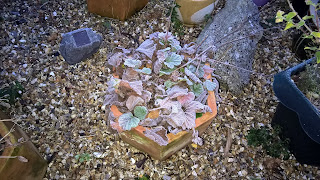 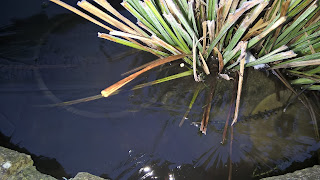 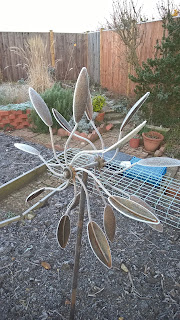 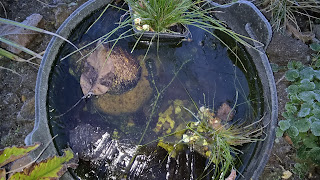 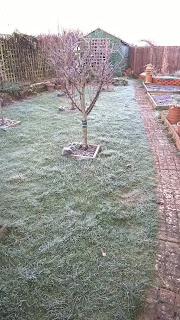 and it didn't start to thaw until late morning when the sun came round. We had patches of freezing fog as well which didn't help. There was a plethora of blackbirds, sparrows and our pair of blue tits feeding in the shrubs. The blue tits were in and out of their nesting box most of the morning and at one point the sparrows were taking an interest in it as well! I boiled the kettle and defrosted the bird baths and part of the pond then I spent the best part of an hour removing about three-quarters of the gravel from the floor of the greenhouse and put it on the cleared herb garden area. 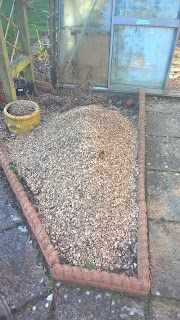 Tuesday - another frosty morning with freezing fog which lasted all day. Late afternoon we moved the small plants from the greenhouse into him indoors' workshop. 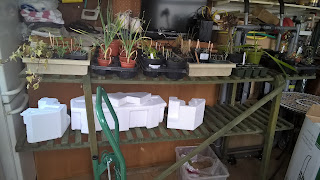 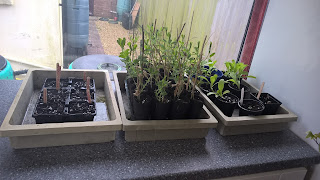 Wednesday - a hard frost overnight and bitterly cold this morning but it didn't deter us, we braved the cold and spent the morning in the garden. Him indoors assembled my new barrow that goes easily up and down steps, he emptied ash on to one of the veg patches and dug it in then we both tidied up the shade garden and he put all the cuttings out the back 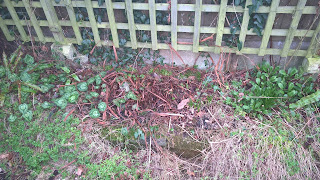 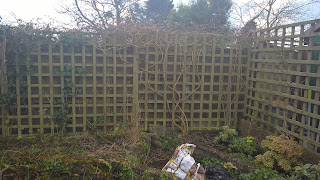 It's looking better and I found cyclamen growing under dead leaves (top pic). We have cut back the clematis as it was growing in clumps rather than across the trellis so we can now re-train it. I also cut back the hydrangea by the greenhouse as it's going to be dug out, then I pruned the pear tree. 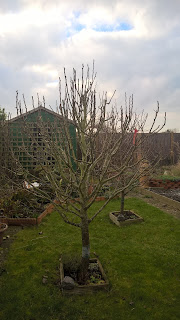 Not sure if I've done it right but it's fairly aesthetically pleasing and I've left new growth on it. Him indoors removed the big pots from the greenhouse and put them in his workshop so the greenhouse is now empty and ready to come down 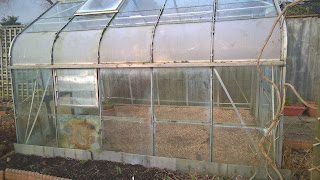 My next job was sowing seeds in the propagator - red basil, garlic seeds, rudbeckia, flax, 2 x pepper varieties, tomato and verbena (tall variety) - which is now in the conservatory. These seeds were taken from last year's crop so it's more of an experiment. 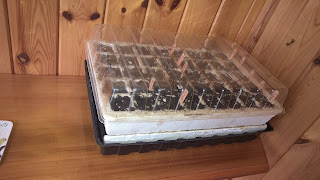 The cress and coriander micro greens are on the kitchen windowsill 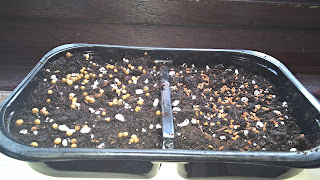 By this time we were frozen so after lunch we headed for the local garden centre where I bought a peanut feeder and peanuts for the birds and more seeds - mustard and cress, radish micro greens, radish sparkler, lettuce sweetheart, spinach (I've not been successful so far with this), French bean opera and dwarf runner bean Hestia. On the way out we passed a shrub in a large pot with wonderful ground cover underneath it...cuttings are already potted up! Oh...and we have buds on one of the 'for your eyes only' roses 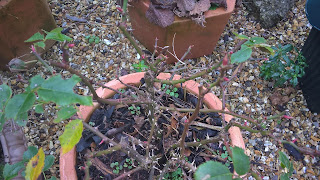 Thursday - and still bitterly cold with a biting wind. By mid-morning the greenhouse held together with duct tape was down and by early afternoon the shed at the bottom of the garden that has been defying gravity for the past year or so was also down. 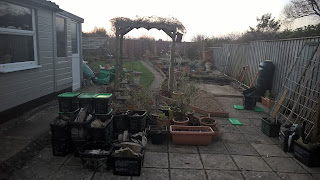 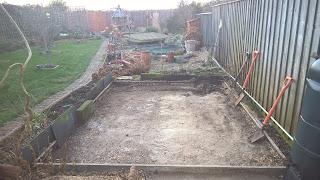 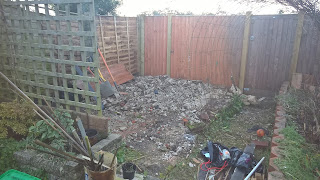 Him indoors' workshop smells of white spirit so we kept the door open all day to try and clear it. I watched Winterwatch this evening. They had conducted an experiment with different colour bird feeders and the result was that the birds did not like the red feeder as apparently it means danger to them. So...the new red ladybird peanut feeder I bought yesterday will be going back and exchanged for a different one!

Friday - and not so cold today. A skip arrived just after 9am and the builders worked tirelessly all day digging out the old foundations, fuelled by coffee and digestive biscuits. They even worked all afternoon in the rain.

Saturday - 8.30 this morning four tons of hardcore (the biscuit-crumb base of the new foundations as the builder described it) arrived together with cement and breeze blocks. 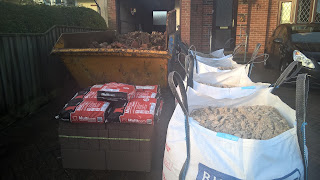 I couldn't get out in the garden apart from feeding the fish, which is a shame because it was a lovely day until late afternoon so I potted up the parsley seedlings 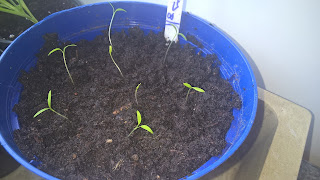 then re-potted the two indoor orchids. This job was long overdue and they were in a sorry state but hopefully they will perk up now. I mustn't water them for 7-10 days to let them settle. 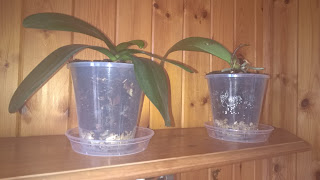 Sunday - raining this morning. Yesterday the builders moved three of the four tons of hardcore and the breeze blocks. The bases for the new greenhouse and new top shed are now ready for concreting. They plan to start tomorrow but it's forecast rain all week...typical. The cress is starting to sprout but not the coriander yet. 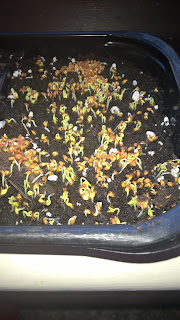 That's it for this week. Although the garden needs the rain I'm hoping the forecast is wrong for the next couple of days. Have a good week and catch up next Sunday.
Regards,
DD
Follow me on Twitter @DaisyDigga﻿
﻿
﻿
Posted by Daisy Digga at 13:40