Dorset Garden Diary - Another Year in the Garden Begins

I hope you had a good Christmas. We had a nice one although I'm packing a bit more weight than I was before the holidays, but a couple of sessions in the garden will soon sort that out.

Christmas Eve started dry and sunny so we were up early and out in the garden. I cut down the dahlias in the cottage garden, mulched over the bulbs to protect them from frost and tidied up a bit, still leaving shelter for small mammals and insects. Guess what I found...kale growing 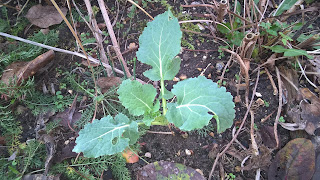 I definitely didn't plant it there but, as in the summer, it's been growing everywhere except where I planted it!

This is the cottage garden after pruning and tidying. 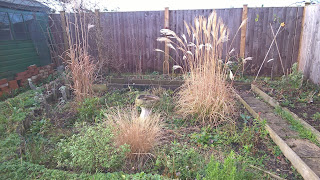 It looks a bit bare but the grasses are still a feature and the heathers are in flower. They are still small but they will spread in time 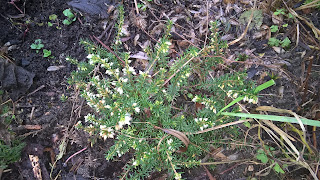 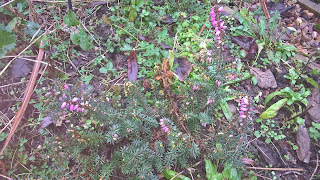 The potentilla I planted in the summer is producing tiny red buds but they're not big enough to show up on a pic.

I also spotted this lone bud in the shade garden, I think it's a type of viburnum. 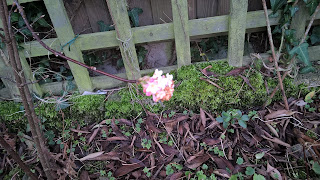 And there is a splash of colour from next door's garden - pic not very good I'm afraid, but it does look good with the morning sun on it, a shot I tried to get but my phone decided it didn't wasn't going to play. It's developing a mind of it's own lately. 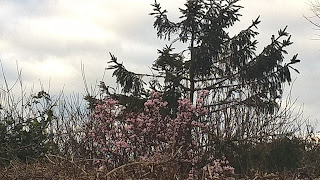 ﻿
We cleared leaves off the pond netting and him indoors repaired one of the panes of glass in the greenhouse that keeps slipping down. Between you and me, I can see a new greenhouse appearing soon as more of the panes are slipping or falling out. I turned the composters and him indoors took all the cuttings from the cottage garden and put them in the big compost bin out the back, which is now full...looking forward to some good compost later this year (nearly said next year!). We then fed the fish and went indoors to begin the Christmas festivities.

New Year's Day - mild today but it's been a cold week with frost each morning and thick, freezing fog in places. 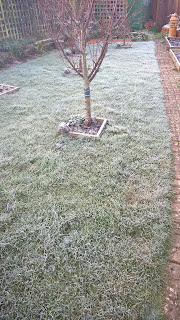 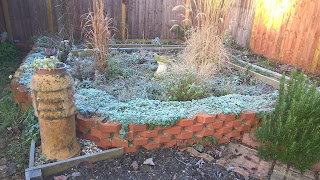 Like us, the fish have been feeding well all week. Yesterday morning the garden was full of blackbirds and sparrows flitting around and rummaging for insects. Two squirrels made numerous journeys back and forth across our back fence to the large tree in the garden next door but one. And...the heron was back to see if there was any fish left in next door's pond. 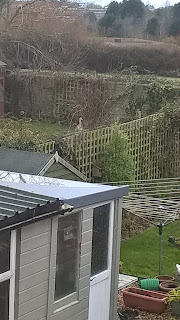 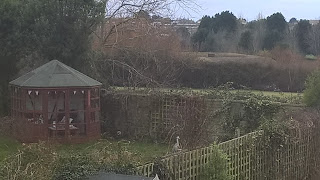 I kept popping outside to make sure it hadn't come over into our garden as most of the fish were near the surface - hopefully the netting is a deterrent.

This morning him indoors once more repaired the pane of glass in the greenhouse that, despite his efforts, had slipped again (very secure now, its not going anywhere) and he cleaned out the blue tit's nesting box. The other nesting boxes haven't been used. I potted up the loose bulbs that appear every time I plant something. I don't know what they are so I've put them all in a large trough and we'll see what emerges in the spring. I planted the trichtys bulbs (dark beauty, latifolia and hirta) for the front garden into pots for now. I still haven't started on the front garden rockery but I have downloaded how to build one, so that's a start.

No Countryfile today but I've checked the weather for next week and it looks like it's getting colder and mostly sunny. Well, that's it for this week and for the holidays, so it's back to normality. Have a good one and catch up next Sunday.