It's been cold and frosty most of the week then turned milder this weekend. I sometimes wonder what I'm going to find to do and write about during the winter months, but there's always plenty to be done.

Monday - and a frosty start to the day. The netting was dipping in the pond again. I've thought maybe it's a frog but I would have thought it was too cold for them to be out and about. I don't think it's the heron, I hope not. Anyway, I pulled it tight again. By 10pm this evening everything was covered in frost.

Tuesday - the frost was so thick this morning it looked like it had been snowing. The bird baths and pond were frozen over. I carefully defrosted a small part of the pond and I have now put a plastic disc on the surface so if the water freezes again there will be an air hole for the fish. I had some apricots for breakfast (yes, it's that healthy month again) and I put the stones in water to soak as an experiment before planting them to see if they'll grow.

Wednesday - pond frozen again so I'm glad I put the plastic disc in. The pane of glass in the greenhouse that him indoors has tried to secure had slipped again this morning so before I went out I stuck an empty compost bag over the gap. Not very elegant I know, but more frost was forecast this evening and I needed to protect the plants. 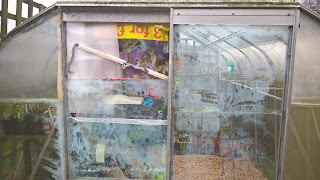 I potted up the apricot stones that had been soaking overnight and put them on the kitchen windowsill.

Saturday - I was too busy to get out in the garden the last couple of days but I've made up for it today. Thursday and Friday were cold, even the fish didn't surface but today is milder and cloudy and has an autumnal feel about it. Some of the fish were waiting for an early breakfast. I went out to the garden centre this morning and bought a squirrel-proof bird feeder, an adjustable small bird feeder that's jammed as I was assembling it so I'll have to take it back, razzmatazz chilli seeds, carrot seeds on tape (to see how they grow compared to loose seeds) and potatoes - red Duke of York (first early), Charlotte (salad) and King Edward (main crop). I have some second early's arriving by post hopefully at the end of the month. I've put the first early's in an egg box in the pottering shed to chit as they can be planted out from February. 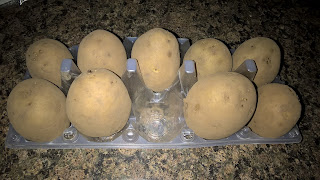 I had more apricots yesterday and potted up the stones, but this time I haven't soaked them so I'll see which, if any, of the two groups grow best. I've done the first sowing of the razzmatazz chillies as apparently they can take quite a while to germinate then I decided I might as well sort out the seed packets and get them organised into months ready for sowing 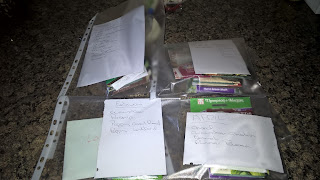 And then still on a roll, I cleaned the propagator and the indoor tray I use for mustard, cress etc. I checked the greenhouse and watered the pots. I'll probably need to re-pot the calendula next week as they are crowded in their pots. The hypericum (miracle grandeur) that has yellow flowers and red berries in the summer is now sporting deep purple berries 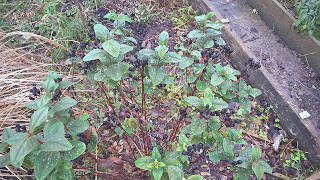 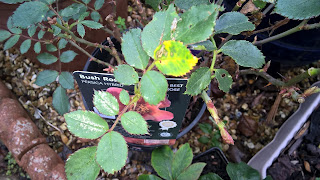 I'm pleased this primula is on the verge of blooming, the whole plant is less than 3 inches across as it's a cutting I took last year. 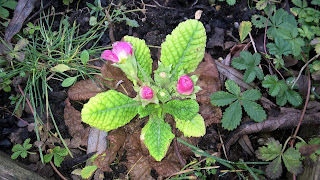 Sunday - today felt like spring had arrived in the warm sun. I was sorting through the bamboo canes that are stored higgledy-piggledy behind the pottering shed and I leant forward to get some, putting my hand out to steady myself. Not a good idea to lean on a composter that tumbles round, but no harm done, it was just a bit of a surprise when it moved. I saw a bumble bee, heard the woodpecker again plus the hedge sparrows were squabbling all morning and the blackbirds were singing. The makeshift cover I'd put over the slipped glass in the greenhouse had come loose and was hanging down so I carefully took it down and replaced it with bubble wrap. It looks much better, but not as good as a greenhouse that doesn't need bubble wrap... 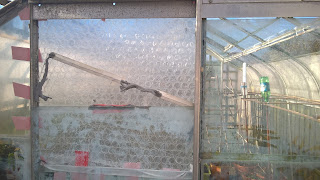 I counted around 15-20 fish (they kept moving) when I fed them this morning. No doubt there'll be loads more in the spring! Not bad considering two years ago there were only five.

I raked the leaves off the lawn and swept the pathways and now have another bag of leaves composting. The honeysuckle over the arch at the top of the garden has new growth on it. 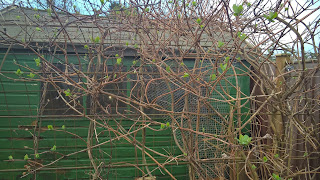 My next job was the bird table. Yep, the ongoing battle to keep the magpies and pigeons off. This is my latest attempt - watch this space. 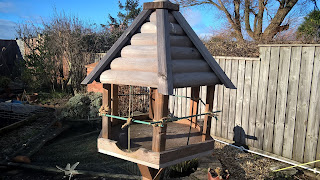 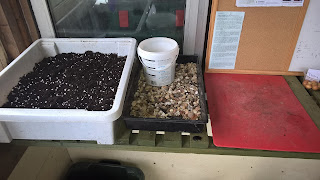 As it was prepared I again sowed laburnum seeds (third year lucky maybe, hopefully, please) to see if they will take and also parsley. I watched Countryfile this evening for the weather, looks like it's starting off mild and wet then becoming colder with maybe some snow towards the end of the week. Not often we have that in this part of Dorset. Have a good week, stay warm and catch up next Sunday.