Last week I said the weather for this week was going to start wet then be dry, mild and cloudy. Well, that didn't happen as it only became milder today. It's been very cold with daytime temperatures only just above freezing with frosty nights. And of course, because it was supposed to be getting milder I moved the onion and garlic troughs and the swiss chard out of the greenhouse and uncovered the onions in the garden. Thankfully, they all appear to have survived. We have had different types of frost...at the beginning of the week the frost was white like a light snowfall but Friday and Saturday there was no obvious sign of frost but the water in the birdbaths and pond were still frozen. The days have been bright and sunny but often not enough to melt the ice, but on the plus side we have had some cracking sunrises and sunsets.

I was away for a couple of days during the week so not much was done in the garden apart from defrosting the bird baths and pond and topping up the bird feeders. The small birds are still managing to make a mess even with the suet balls, so I've put the feeder into a square mesh holder that came with the bird feeding station I bought last year. Anyway, it appears to be working as it's stopping the bits of feed falling to the ground and attracting unwanted visitors. 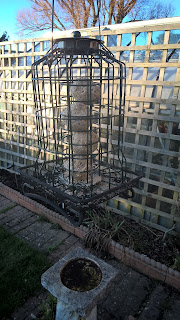 Sparrows, blue tits and even the robins are feeding from it.

On Thursday I hung out a small bird feeder containing mealworms, shredded suet and seeds but so far the food hasn't been touched - maybe the bright lid is putting them off although it does brighten up the garden 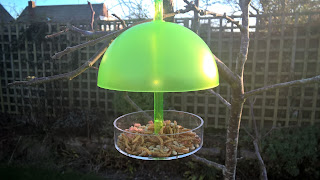 That's all I did during the week. Yesterday I'd planned to sow seeds in the propagator and clear out the greenhouse as it's coming down next week (sooner than I thought) which is good because it means not only will the new one be up in time for the main sowing, but the blue tits won't have started nesting (their nesting box is near the greenhouse). I am not normally a fair weather gardener, or a fair weather anything, but yesterday was cold cold cold, bitter and raw and bleak and generally not pleasant. I topped up the feeders, defrosted a small part of the pond and spent the rest of the day in the warm.

Sunday - no frost, much warmer and sunny. Joy! First thing, I went for a walk after having been indoors all yesterday, then I started on the greenhouse.

I took down the bamboo frames that were used for supporting the tomatoes, cucumbers and gherkins, took out the watering cans and unused seed trays and pots under the shelving unit then put the seedling pots in trays ready to be moved into him indoors' workshop when the greenhouse comes down. 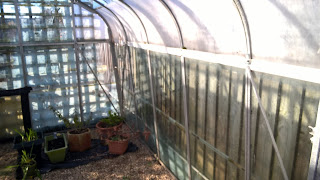 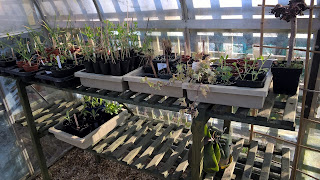 All that needs to be done now is rake up and save the gravel and put the plants currently on the floor outside and cover them against frost. I also cleared the herb garden space outside the greenhouse 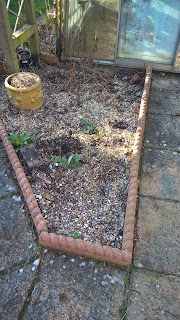 This needs a good sort out, the gravel removing and a new weed blanket putting down. Him indoors will have to sort out the trellis on the back and sides of the greenhouse. The back should be ok 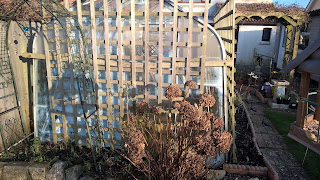 but the side trellis has the root to the clematis that grows over the arch growing through it. 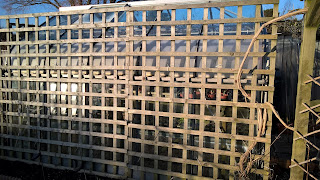 At least my make-shift duct tape repairs have stayed in place this time, albeit unsightly (check out that blue sky!) 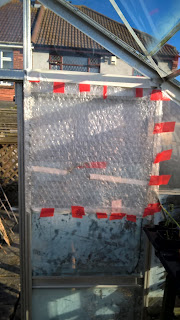 The calendula art shades are doing very well. I've re-potted some of them into individual pots and left the rest in one pot...we'll see if there's any difference in growth 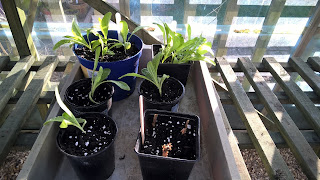 I planted some raspberry bush root cuttings. Not deliberately...the roots were growing through the bottom of the pot when I moved it and one of the strands broke off. I also planted some gooseberry cuttings as Monty Don says they are easy to propagate.

Yesterday there was hardly any activity in the garden, just one blackbird, a dejected pigeon staring at the birdbath that had frozen over again (I felt sorry for it and went out with the kettle to defrost it again) and a lone squirrel ran along the back fence which was appropriate as, apparently, it was 'squirrel appreciation day'. What is that all about? In contrast, today the garden was buzzing with bird activity. Sparrows were darting in and out of the clematis on the arch and the garden shrubs and feeding from the suet feeder; the blue tit briefly checked out its nesting box and there were many blackbirds. I am happy about this because they were feeding off the bird table which is brilliant...not a magpie in sight! 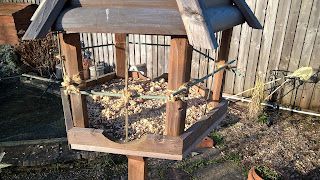 In fact, there was a pair of blackbirds taking it in turns to feed. I was only a couple of feet away...unfortunately with no phone on me to take a pic!

That's about it for this week. Phew, I was starting to worry I hadn't done enough in the garden to write about. The weather for the coming week for us here in Dorset is still cold with freezing fog over the next couple of days, then windier then becoming warmer for the weekend...we'll see. Have a good week and catch up next weekend.