Dorset Garden Diary - A New Greenhouse On The Way

It's been a chilly week here in Dorset and very windy but we have been luckier than most of the country.

Monday - today started sunny but cold and I thought, this looks promising but by mid-morning we were deluged with heavy rain then by early afternoon a strong northerly wind had picked up. The bubble wrap I'd put over the greenhouse glass was peeling off so I have duct taped it back up. I took the defunct bird feeder back to the shop and the assistants had no joy with it either. They didn't have any more in stock so they've ordered another one for me. I liked it because it was small, the top could be adjusted to stop the larger birds feeding and the seed went into a plastic bowl which would hopefully stop the birds throwing it everywhere.

Tuesday- him indoors has ordered a new greenhouse (big smile). We still have the smaller one purchased from a good friend last year but that's allocated for elsewhere in the garden. The new greenhouse will be delivered towards the end of February as we need to put down a concrete base - the existing one is compacted soil with gravel on top (by the previous owners). It will depend on the weather when that can be done but the new greenhouse needs to be in situ by March when I start the majority of the seed sowings. Normally I would be sowing some seeds now but I don't know when the existing greenhouse will be dismantled although I can utilise one end of the kitchen and the conservatory temporarily.

Wednesday - Very cold and very windy. The seedlings are coming along nicely in the greenhouse, and rudbeckia and verbascum have broken through the soil.  I have taken another cutting from the for your eyes only rose. The suet balls in the new bird feeder have been nibbled at so that is good news and the food on the bird table has been eaten but not sure what by. I hung up a plastic string-type feeder of peanuts next to the suet ball feeder. The fish were waiting to be fed, some of the adults have grown a lot over the summer and one in particular is looking huge...maybe the next batch of fishlings are on their way??? I covered the outside onion frame as heavy frost and snow are forecast over the next couple of days and I don't want to lose them 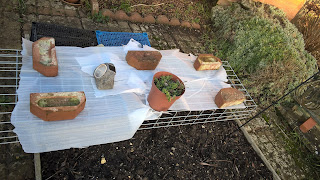 and I moved the troughs of swiss chard, garlic and onions into the greenhouse just in case 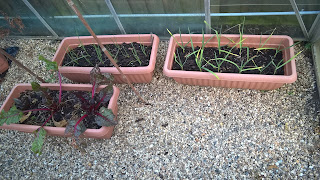 and also the hellebore and gardenia recently purchased which are looking very healthy, the gardenia has doubled in size over the last couple of months (on the right next to the pot). 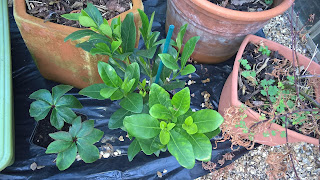 Thursday - today started with proper rain...thick, heavy drops. It was also ridiculously windy and blew the bird feeder over. Thankfully it landed in the honeysuckle over the arch near the cottage garden so I left it there for the time being, but I removed the peanut feeder as it's not squirrel proof. After the awful weather during the day the night was clear, the moon was nearly full and so bright I could nearly see to the bottom of the garden.

Friday - I woke just after five this morning and the room was bright like someone's security light had been triggered. When I looked out the window the full moon had moved round to the west and was still amazingly bright in the clear sky. We didn't have the snow that was forecast (probably the only place in the UK that didn't get any) but it was bitterly cold with the wind chill from the north. The netting was dipped in the pond again - this is really weird. Anyway, I've tightened it up yet again, not sure how much more tightening it will take though. I righted the bird feeder this morning and stuck it back in the ground but by the afternoon it had been blown over again so I've taken it down and hung the suet ball feeder on the arch near the patio.

Sunday - no gardening yesterday as I was working but I did a quick check of everything when I got home. The birds have been feeding from the feeder in its new position. Today was forecast heavy rain but it only drizzled and cleared up by lunchtime but stayed cloudy. I moved the swiss chard, garlic and onions out of the greenhouse and uncovered the onions in the veg patch as the threat of frost and snow has gone. Had a stroll round the garden and the scabious is still flowering valiantly although a bit tatty, various bulbs are poking through the soil and the aubretia is beginning to flower 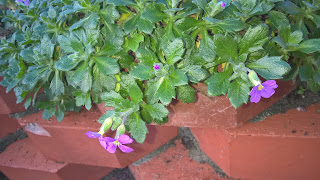 The fish were swimming around lazily so I fed them a couple of times.

As there's not much to take a pic of at the moment, here's a few from the past couple of years to brighten up the winter. 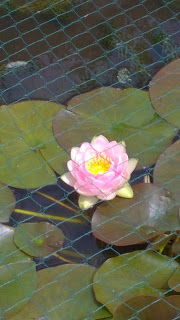 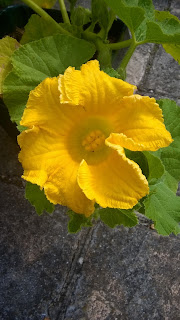 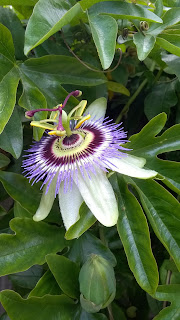 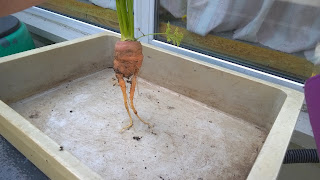 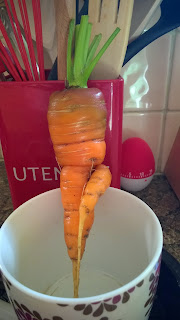 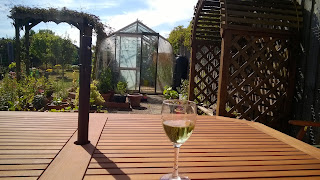 As usual I watched Countryfile for the week's weather and apart from rain tomorrow it's going to be dry, mild and cloudy. Well, that's it for this week. Stay warm and catch up next Sunday.
Regards,
DD
Follow me on Twitter @DaisyDigga﻿
Posted by Daisy Digga at 19:56